Stories of Pantomime Babes and Juveniles

We have been contacted recently by two people who served as 'babes' in pantomimes during the 1950's - one was an Aida Foster babe at the Palladium and one a Terry Juvenile at the London Casino. We have asked them to share their memories with our readers and we hope to encourage more babes and juveniles (of all ages) to share their stories (and pictures if they have them!). Here is the first, in what we hope will be a series, of instalments:- 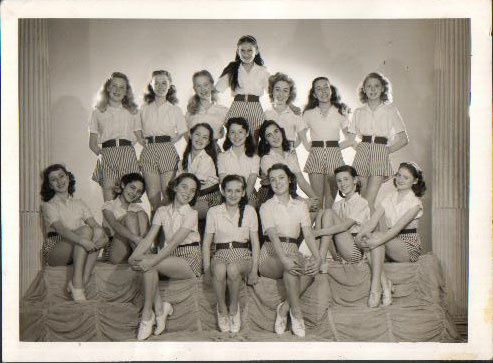 The Aida Foster Babes - 1953 - Cinderella at the Palladium

'The early l950's were such exciting years in my life. I was sent to the Aida Foster school of dancing which was an incredibly successful teaching academy plus as well as a theatrical agency and so it was that I became an 'Aida Foster babe' and picked via the audition system to appear first in Dick Whittington with Frankie Howard and the next year Cinderella with a very young Julie Andrews and Max Bygraves. These were magical experiences for a very young teenager '“ the rehearsals, the costume fittings, the thrill of the performance, meeting with the stars, listening out for the loud speaker to tell us when we were 'on' '“ rushing down the stone stairway to the stage (of course we were in the very last dressing room available right at the top of the building) '“ the door right next to our dressing room led directly into the 'gods' as the upper circle was known. Once the Christmas holidays had finished and the panto run continued well into February '“ we had school lessons in the mornings in the dressing room and then we formed a crocodile line as we were shepherded out for lunch in a nearby cafe (we had two chaperones and occasionally 'Mums' joined the rota. ). Selfishly I never gave a thought to my parents who were obliged to collect me at the end of each nightly performance at around 10.00 pm to take me home by tube back to the suburbs (my parents didn't drive and this was the 50's!) six nights a week!  To sing, dance and perform in those fabulous costumes, under the lights, with the stars, in front of the audience was a magical and unforgettable experience.' 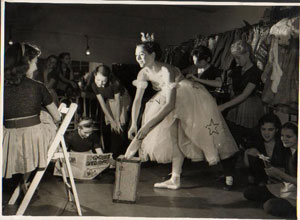 We have been contacted by the family of Alice who have provided us with some photos and memories of her days as a Sunbeam. Francis Laidler created the troupe in 1917 in Bradford to create 'a ray of human sunshine to the darkness of the war years' and they still appear in the Bradford pantomimes today. Alice was a sunbeam from 1937 to 1944, this exceptional number of years service was due to the fact that she only grew to be 4ft 9ins so was still performing up to the age of 19 as leader of the troupe. During her time with the troupe Alice remembers performing in Bradford, Leeds, Leigh, Oldham, Rochdale, as well as Bristol and many other locations. She even recalls walking through London in the Blitz with the troupe - this could possibly have been the 1939/40 Laidler production of Cinderella at the London Coliseum but this is unconfirmed. Included in the pictures provided are some from the 1937/8 Cinderella at the Prince's Theatre in Bristol. 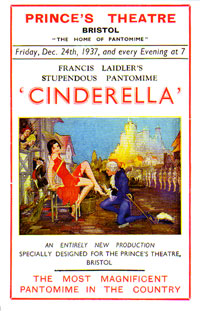 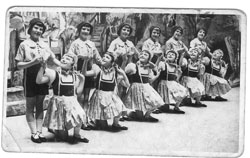 The following picture we think is also from that production of Cinderella and was for a number entitled 'Deep Purple'. Alice remembers it as one of the most glamorous costumes she ever wore. 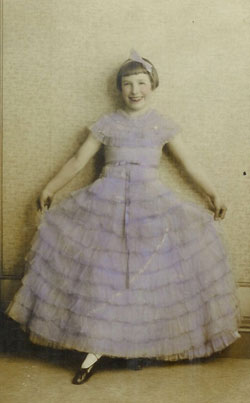 Also included in this fantastic selection were the following - a signed picture of Phil Strickland who played Buttons in the 1937/8 Princes Theatre Bristol; a picture entitled 'Rickety Road' which was taken from the Third Sunshine Review in March 1939 and finally two group pictures of the Sunbeams. The first taken from 1938 where you can see indicated both Alice and also Marion Moorby who became Alice's sister-in-law when Alice married her brother Jack. The second picture is from 1940 where Alice is 2nd from the left and Marion Moorby is 4th from the right. 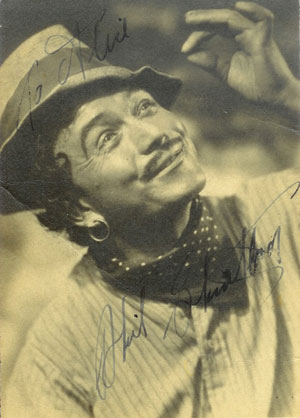 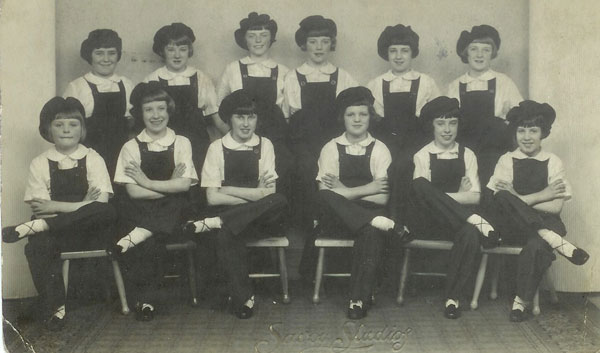 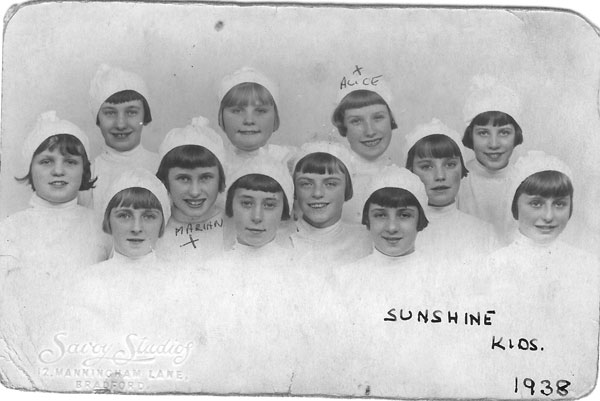 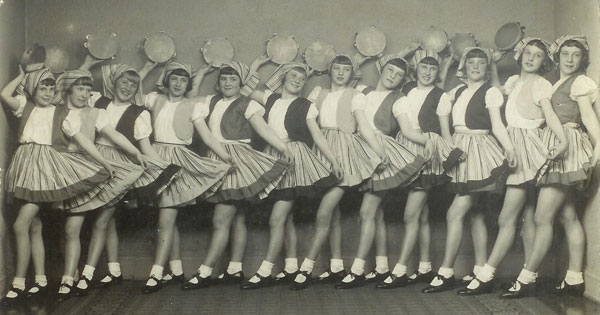 We are very grateful to Alice and family for these memories.

You can read further about the Sunbeams, Francis Laidler and The Princes Theatre Bristol in the following articles

Francis Laidler - The King of Pantomimes

My mother always took us to the pantomime every year in the West End but this particular year (1953) she had not bought the tickets before we had got there. Any way she took my brother and I (we were aged 9 and 3 respectively) up to London in the hope we would get to see Cinderella. On arrival at the Palladium there were no seats to be had but we were told we could have the standing room only places which were on the steps inside which she duly paid for and we went in to enjoy the show. During the interval an usherette told my mother that they were looking for a little girl to take the glass slipper up to Prince Charming to place on Cinderella's foot as per the fairy tale and would she allow me to do this?

My mother agreed of course and so at the precise moment I was directed down the centre aisle complete with the velvet cushion and '˜glass slipper' up to the Palladium stage where Cinderella (Julie Andrews), Buttons (Max Bygraves), Baron Pastry (Richard Hearne aka Mr.Pastry), Prince Charming (Adele Dixon) and the Ugly Sisters (Jon Pertwee & Tony Sympson) were all waiting for me. Passed over the orchestra pit I took my place on that famous stage complete in red wellington boots! (How my mother wished I was dressed in more appropriate attire!)

Having passed the slipper over I took my bow and was taken backstage by Max & Julie where I was told to choose any one of the toys that was there in front of me. There was so many to choose from but I had always wanted a bike and that was what I chose. My brother was sent to collect me from the stage and I went home with wonderful memories of such a night.

Hi there! I'm 45 year old Hazel Quinn and I played the Girl Babe in The London Palladium's 1972/73 production of the pantomime '˜Babes In The Wood'. I don't come from a '˜showbiz' background and my family were beyond broke so I didn't go to stage school or dancing classes and had never acted before; I just went, aged 10, to the auditions to see what backstage at the famous Palladium was like! All the other girls were dressed in frills and flounces and I was in an old plain dress that I'd grown out of so much I daren't bend over or I'd flash my knickers!

To audition we had to perform the '˜lost in the wood' scene where the '˜Babes' (a brother and sister) have the stage to themselves and have to act how frightened and near to death they are. In the darkness of the stalls was famous director, Albert J Knight, watching us and deciding our fates.

Due to the licensing laws for children performing 3 sets of '˜Babes' were needed, working 2 days each '“ the most coveted being the busy Friday and Saturday. Somehow I got picked for those weekends with an experienced, talented '˜brother' Larry Martin.

What a production it was! In those days they could still afford a full orchestra, dance troupes and a chorus. I went down through the famous trapdoor, visited '˜Fairyland', and moved amongst flying dancers and fountains. I wore brocades and satins and velvets provided by the then costumiers '˜Berman's and Nathan's'.

The late Derek Nimmo (the Good Robber) and Bill Maynard (the Bad Robber) gave me loads of professional encouragement. Another cast member favourite was the lovely Julian Orchard. In those days the Palladium panto was the biggest show around and everyone in the business came to see us. It was something a little girl could never forget and set me up for life in '˜the business'. I even met Princess Grace of Monaco (the former Hollywood actress Grace Kelly) and spoke to her backstage but was too young to know who she was as her films had been broadcast past my bedtime!

I'd sit quietly at the side of the stage whenever I wasn't on: studying the other actors, absorbing and learning. What I learned, the unique, smells, sounds will always be with me and for many months (pantos ran longer in those days) I was a poor girl transformed into a princess.

I've written an autobiography about my long ago days which I'm hoping to get published and am at my website www.hazelquinn.com so come visit, say hello '“ especially if you were part of those days '“ I'd love to hear from you!!