A Christmas pantomime is like a major military operation. The plans were made two years ago. Twenty carpenters have-spent a twelve month on the scenery. Small fairies are in short supply, but somehow a fortnight 's rehearsal will be enough for that great transformation scene.

A Short man with a shrewd face strides round his desk flicking' the pages of a typescript, reading occasional paraşgraphs aloud and wrinkling his eyes with delight. "It kills me stone dead," he shouts. "Hey, listen to this bit where the Cat comes in. Can't you just see it?" His hand sweeps the air. "I can see it," he prances catlike and shouts again. "Kills me stone dead." Behind him the Press agent nods. "Terrific," he murmurs. "Shaw couldn't have written that." Pantomime producer Bertram Montague is happy about his "book" for this year's "Dick Whittington." "And why not? I've had the theatre in my lungs all my life, and. what's more I can get right inside a child's mind. It was way back in the '20s. I took my eleven-year-old daughter to Daly's, and when I heard the shrill laughter of  those thousands of kiddies I was overcome with emotion. I wanted to produce a pantomime and get those laughs. And I have."

Since then Montague has put on 82 pantos. "A full-time job. Four days after the curtain goes up on this year's shows I'll be back in the office sweating over next year's lot."

It Began with an Execution

All over the country producers have been fitting the final pieces into the intricate many şcoloured mosaic which makes a pantomime, and now the dull backstage pumpkins are to be transformed into sparkling vehicles running on golden rails to a magic land. - In the case of the big production the ground plan has been blue-printed two or three years ago. The subjects of the pantos have been chosen, theatres booked, and the star parts cast. Last year the producers began work on this year's "book" and score. The story and characşterisation stick as closely as possible to the original because children will resent changes. But new songs are interpolated-for the principal boy, and topical jokes sprinkled about to lighten that heavy "Christmas pud and turkey" atmosphere for the grown-ups.

The orange-peel and sequin-glittering fairyşland of pantomime grew out of the bitter competition between Lincoln's Inn Theatre and Drury Lane. In December 1717, Rich, the manager of Lincoln's Inn, which was losing ground to the brighter attractions of Drury Lane, advertised "Harlequin Executed." A pantomime described as "A new Italian Mimic Scene. (never performed before) between a Scaramouch, a Harlequin, a Country Farmer, his wife and others."

NOVEMBER AUDITIONS: Shivering with jright-or cold? "Thank you. Next"

Its huge success even put a temporary candleşsnuffer on Shakespeare, and Garrick ranted at his public for deserting himself for such frivolity.

But the pantomime tradition reaches even further back, into the beer and beef - days of medieval England when pagan revels greeted the New Year. The Plough Monday feast was set round a play with "music and groştesques, the Bessy, a man dressed as a Woman, and the Fool, a man adorned" with skins, heavy cap, and animal's tail." At anşother feast, masquerşades in beasts' heads and women's clothes were a boisterous feaşture of the entertainşment.

It was in the 18th century that an enterş-prising manager used. a fairy story as the basis  of his show and the genius of the great clown Joseph Grimaldi gave the overshadowing role to the comedian. The robust days of music hall are a memory, but the brass-lunged tradition of the panto hasn't lost a single spangle, and it is still every child's thrilling first approach to the dark excitement of the theatre.

For the majority of the public it is "suddenly Christmas, suddenly pantomime time," but the curtains go up on the result of a full year's work.

In the background are the workshops. In Birmingham, Emile Littler owns "Pantomime House" where all the scenery, props and wardşrobes are sent when his shows close in February. , Here Mrs. P. L. Wright ("call me Physhe") is in charge of the 50 wardrobe girls who have been making and. repairing the dresses for this year's shows, and sewing on the millions of sequins by hand; the ten carpenters who have been building the scenery, and the two girls who have been painting it. There is also a full-şsize stage at Panto House where Physhe can fly the clothes, put the flats out and dress the stage as it will finally appear in Coventry, Plymouth, Manchester or London.

The same hammering, sawing and sewing goes on in the same sharp atmosphere of new paint in a disused church in St. John's Wood, Bertram Montague's workshop, and in Hove where 20 carpenters work all year to build the sets for Tom Arnold's shows.

The price of all this has risen about six times since the Great War. Carpentry for Cinderella (20,000 ft. of wood) costs nearly ú5,000, the Baron's kitchen ú600, Cinderella's coach which cost ú50 second hand before the war is worth ú330 now, and the cost of dressing a principal girl is about ú125.

Another round-the-clock job is the training of the juveniles who are allowed on the stage at the age of 12. The problem is to get and train tiny children who will stay tiny. Probably this season's most disappointed child is the North. Kensington girl who gained a stone and four inches since last February, and has grown herşself out of the part of "a small fairy."

While the juveniles hop about the dusty floors of the dance studios, the Tiller girls (there are 24 in each of Emile Littler's shows) are learning the leg-aching work of the chorus. It takes 12 months to make a novice into a Tiller girl,. who must be over 15 years "old and not more than 5 ft. 4 in.

By April the principal parts have been cast, summer passes, and there is banging in the workshops, thumping in the dance studios and aspirins for the producer who must worry over every detail.

Autumn comes, it is November, and auditions are being held, in the halls and theatres, for Ugly Sisters, Chinese Emperors, Cats and the back and front ends of cows.

In the echoing emptiness of one theatre a hundred young women and a few men shuffle anxiously on to the bare stage, each clutching a sheet of music. One by one they come forşward, hand their music to a bored pianist and open panic-dry mouths.

The auditions are as quick as that, and in the end two have been chosen as principal girls, and three as Robber Barons.

Towards the end of November the jigsaw begins to make sense, the last pieces are dropşping into place, and the fortnight's rehearsals are a couple of Mondays away. Bertram Montague is unapproachable. He is working on the grid plan for "Dick Whittingşton." This is the arrangement of scenery for the 14 scenes, and needs great technical precişsion. Also on his desk is a new invention for a transformation scene in "Mother Goose." These scenes are miracles of organised speed. One used by Montague is a sixşsecond change in '''Mother .Goose" from the kitchen to the Palace of Gold with its stairways, columns, and troupe of girls dancing the gavotte.

Meanwhile, high above Tottenham Court Road, Hastings Mann, producer for Emile Littler, leaps about his office holding small coloured cardboard figures. A lovesick mushroom, a flirtatious frog, a gay rabbit."New idea we worked out at the story conşference last night. These figures, luminously painted, will be danced across the dark stage. You'll see it in Bo-Peep.He drops the figures and sits down at the piano to compose the ballet music for the new act. 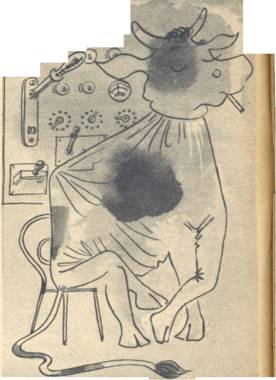 TOGETHER AGAIN: The front and back ends of the pantomime cow. Thank heaven for that., they werenĺt on speaking terms at rehearsal

Mann looks like an efficient business man with a Savile Row facade and a dictaphone mind; But three months before Christmas his thoughts are concentrating on jumping frogs and flying fairies, and the right sort of music to go with each.

The pantomime is reaching the home-stretch, and- it is the proşducer's job to gather the reins and bring home a winner. This means endless care and little sleep.

Two weeks before the pantomime opens, the pantechnicons leave the workshops with the bright new. scenery, the gorgeous dresses, and the traditional stage props. And while the whole company meets for the first time in rehearsal, the stage manager takes over the job of organising his complicated bag of tricks. The transformation scenes, the climbing beanstalks, the trapdoors and trapeze.

In the middle of December is the great week for "joining up" the pantomimes. At the rail way stations for the north, little groups of theatricals gather to say goodbye before leaving for several months in Glasgow, Leeds, Liverşpool and Manchester. These are the principals who have rehearsed privately in London. The choruses will be local, and the troupes of child dancers - almost invariably Mancunian.

And when the orchestra strikes up, the stage is revealed, a dazzling blaze of enchantment, and - rows of small children lean forward with widening eyes and hot clenching fingers.

The magic wand has taken a year to turn the backstage pumpkin into this world of magic, but what would Christmas be without it? 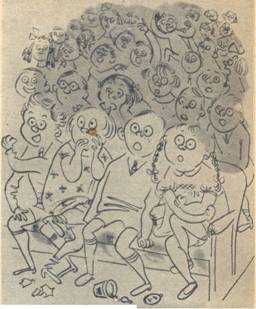