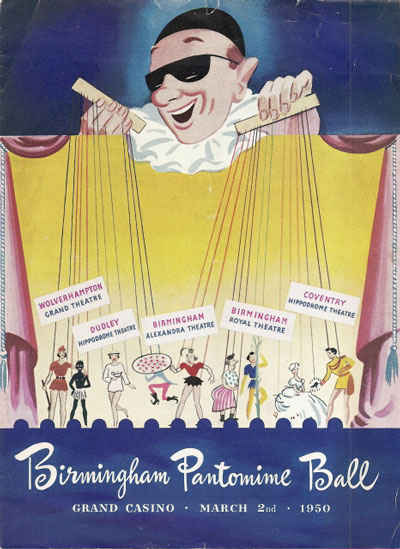 Coming across this brochure for The Pantomime Ball in Birmingham, I was struck by several things. The joint pantomime ball, held for the main Midlands pantomimes was dated March 2nd 1950- so obviously the pantomime seasons were still going strong through February and into March in those days, and, several of the theatres mentioned no longer exist. 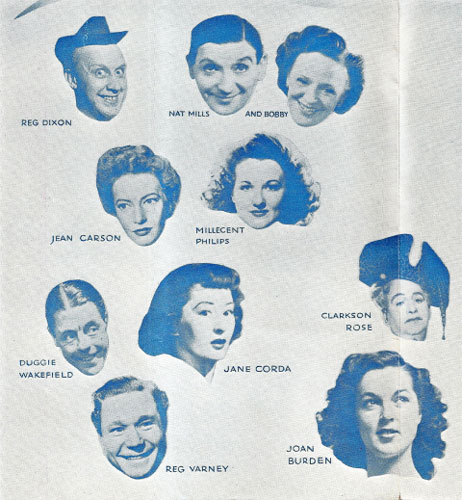 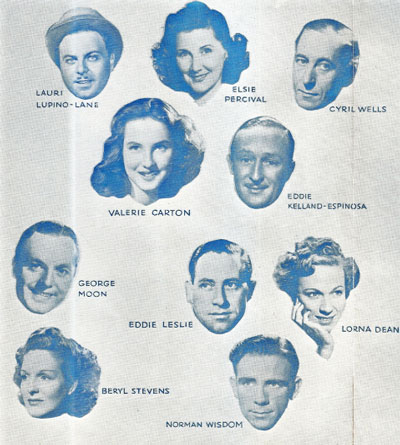 The principal pantomime venues in the Midlands in 1950 were the Alexandra Theatre Birmingham, run by Derek Salberg, followed by the “Showplace of the Midlands”-The Coventry Hippodrome- run by panto king S.H. Newsome, and The Dudley Hippodrome, The Grand Theatre Wolverhampton and the Theatre Royal, Birmingham. 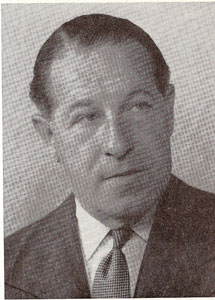 Of those five major theatres, only two survive as working theatres today, one more has remained a bingo hall for several years and two have been demolished. One as recently as 2002.

The next thing that caught my eye was the venue of the Panto Ball for that evening in March 1950. The Grand Casino in Corporation Street, Birmingham. The Grand Casino itself, it turns out had formerly been a huge pantomime venue in its former life as The Grand Theatre Of Varieties, before becoming The Grand Cinema and finally the Grand Casino Ballroom.

THE GRAND CASINO- THE GRAND THEATRE OF VARIETIES

Opened in 1883 this huge theatre played host to the major Music Hall and Variety  stars of the day. It seated 2,200. The first pantomime was performed here in 1883 starring Lottie Collins, famous for her hit song “Ta Ra Ra Boom De Ay!”. The theatre was owned by Andrew Melville who also owned the Lyceum Theatre and Princes Theatre (now the Shaftesbury) in London. The Grand in Birmingham became known as “The Drury Lane of The Midlands”. The theatre saw the appearances in variety of most major stars including Marie Lloyd, Vesta Tilley and W.C.Fields.

Bought by Moss Empires it remained a premier variety and pantomime house until the attraction of the talking pictures forced it to change from live performance into cinema in 1930.

This transition did not last very long, and a few years later in 1933 the venue in Corporation Street closed, only to re-open very many years later as the Grand Casino Ballroom, owned by the Mecca Ballroom chain. It was finally demolished in 1963.

The tradition of holding a pantomime ball is a very charming one, and in a very few places the tradition is carried on. Newcastle Theatre Royal Panto hosted a “get-together” ball with other pantomimes in the area last Christmas, and in the past I have been fortunate enough to be involved in similar parties (no longer “Balls”) such as the Bournemouth, Southsea & Poole panto party- which is still held from time to time, and pantomime parties between Swansea, Cardiff, Bristol and Porthcawl pantomimes in the past.

Mostly these parties are for the company and crew and theatre staff of each venue, but some (like the Swansea/Cardiff pantomime balls) were sold to the general public, with all profits going to charity.

This grand affair in Birmingham in 1950 would have been on sale to the public, and the brochure itself was stamped with your “Lucky Number”, to be entered into a charity raffle. All the stars of the various Midlands pantomimes would have attended, and a great deal of money would be raised for theatrical and local charities.

The major stars of the Midlands attending this ball included Norman Wisdom, Reg Varney and Reg Dixon- major stars of radio, film and theatre, alongside West End stars like Jean Carson- the star of “Love From Judy” and Lauri Lupino Lane- pantomime headliner and the original star of “Me and My Girl”, appearing in “The Queen Of Hearts” at the Alexandra Theatre, with Dumarte & Denzar’s “Skelton’s Alive!”  Act along with John Le Mesurier as The Wizard- and in other venues major variety names, such as Nat Mills and Bobby, pantomime dame supremo, Clarkson Rose and George Moon. 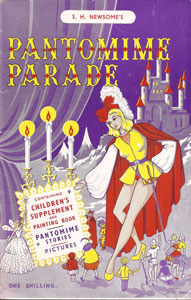 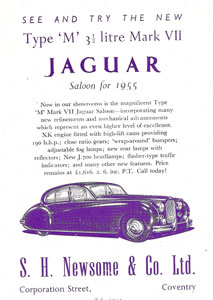 The original theatre was built in 1774, seating 2,000, but was destroyed by fire twice. It was finally totally rebuilt in 1904 as The Theatre Royal in New Street, at a cost of Ł50,000, opening with the pantomime “Babes In The Wood”.

It finally closed its doors in 1956. The final performance was a touring production of “The Fol-De-Rols”. The site is now an office block. 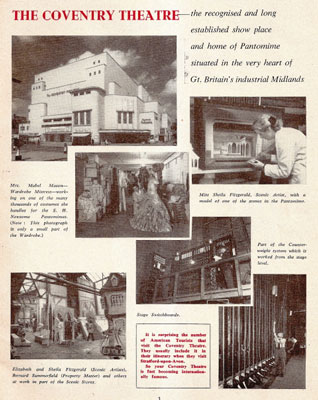 This huge white Art Deco building was, until a few years ago to be found in Hales Street, Coventry. It began life as a huge 2,000 seater modernist building, built in 1936 as the New Hippodrome. The previous theatre had been in Pool Meadow.

In 1944 Newsome was one of the board of directors at Drury Lane Theatre, and was on the board of Moss Empires. As this advertisement illustrates, he had many fingers in many pies, and ran a successful motor showroom in Coventry in addition to his many theatrical tasks.

Newsome presented some of the finest pantomimes in the country at Coventry, but he found the going tough by 1968, when he asked the council for a reduction in the rent. The building was proving too vast to fill by the late 1960’s.It sat 2,000 with room for 500 standing, and boasted one of the largest stages in the country. The Council were later to spend their cash on the newly built Belgrade Theatre in Coventry, where, ironically I worked with Reg Dixon (in 1950 he was Newsome’s star performer) in Mother Goose many years later.The modern Belgrade could not have been any different from the Hippodrome if it tried. 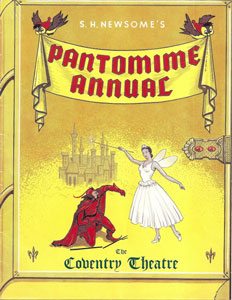 The interior of the Coventry Theatre/Hippodrome was very grand. I remember playing this lovely building several times in the late 1970’s and early 1980’s, and also seeing several shows there in this the “Showplace Of The Midlands”.

The interior was also Art Deco in style, and looked like a luxury ocean going liner of the 1930’s. Not surprising, as the interiors were designed by Bath Artcraft, who furnished the interior of the liner Queen Mary.

I visited the manager’s office several times, and it looked like the sort of office movie moguls used to inhabit in old Hollywood films! The walls I recall were panelled in walnut, and it boasted an enormous 1930’s cocktail cabinet built in to the wall, with a very large walnut art deco desk. It really was a very beautiful building.

It broke my heart several years later to take a show there when the building was all but closed, and the interior had been left to decline- rapidly. Peter Robbins and I waded into the basement to rescue some posters from the 1950’s that were floating in the flooded lower part of the building, and the walls were beginning to seep damp everywhere.

Very sadly the lovely Coventry Hippodrome was demolished in 2002. 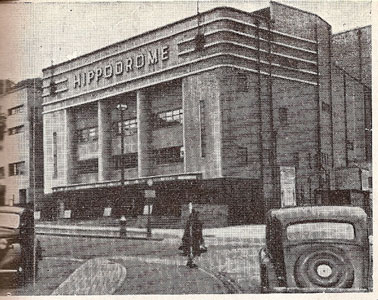 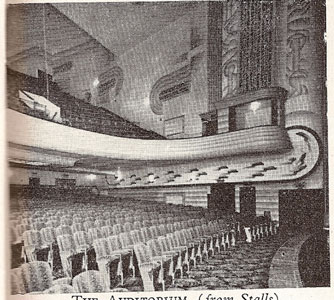 Built in 1938 the theatre remained open until 1964 when it was eventually to become the Gala Bingo in Castle Hill, Dudley.

In the 1950’s the Dudley Hippo was a major pantomime venue, run by the Kennedy Brothers, Bob and Maurice. The pantomimes were presented for fourteen years by S.H. Newsome, who ran the Coventry Hippodrome and presented pantomimes in about five other venues. 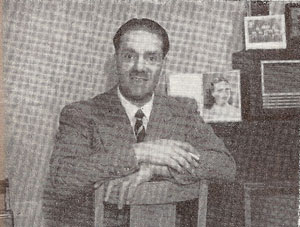 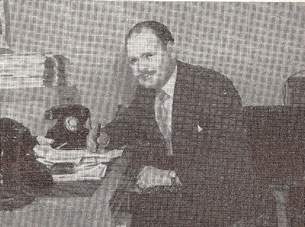 It originally seated 1,750, later this became just over 1,500. Major stars of variety appeared here, and often stayed close by in the prestigious Station Hotel. The likes of George Formby, Laurel and Hardy, Bob Hope and Jonny Ray were to be seen at the theatre. 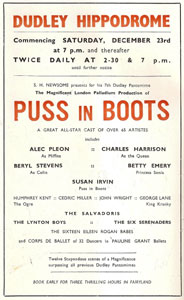 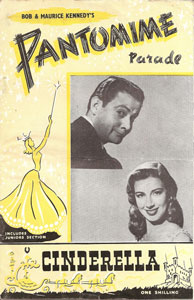 Originally this theatre had 2,151 seats when built in 1894. Currently it has a more modest 1,200 seats, and stands in Lichfield Street Wolverhampton. When Charles Phipps designed the building at a staggering cost of Ł10,000, it was one of several theatres in the town, but is now the only survivor, having outlived “The Star”, “The Hippodrome” and “The Empire Palace”.

The Grand Wolverhampton now presents one of the longest running pantomimes in the country.

The Alexandra Theatre, Station Street Birmingham has long been the home of pantomime in the Midlands. The Salberg family- first Leon then his son Derek ran the theatre from 1911 up until 1977, and were masters of pantomime production.

The theatre was originally built in 1900 as the Lyceum Theatre in Birmingham, but failed within a very short time . Having opened in 1901 it was sold to Lester Collingwood the following year for Ł4,000. He changed the name, and ran the theatre, presenting pantomimes until his death in a road accident in 1910.

Leon Salberg took over the management the next year, and it remained a Salberg Theatre up until Derek Salberg retired in 1975. The theatre was rebuilt in an Art Deco Style in 1935.

Derek Salberg presented top pantomimes and attracted all the great stars of the day to this venue. After his retirement the tradition continued with Triumph Apollo presenting the pantomimes, and in recent years as the Birmingham Hippodrome productions have increased their pantomime presentations, the “Alex” has tended to present top musicals over the Christmas period.

The year of the Pantomime Ball in Birmingham was the year that the Alexandra Theatre had presented “The Queen Of Hearts”. The Coventry Theatre presented “Cinderella” that year, The Theatre Royal had “Jack & The Beanstalk”, “Aladdin” was at the Dudley Hippodrome and “Robinson Crusoe” was at the Grand Wolverhampton. So much choice for a panto fan in 1949!