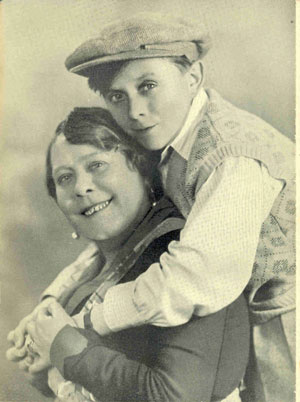 'The Mother of the Forces'

“Every British boy who sees her simply adores her as representing his own mother. She flies thousands of miles and at once makes friends with the crews and her fellow passengers, but there will be no medals for this wonderful old lady- and very little publicity. What does she care? Nothing! She will have a reward that transcends all such transient praise”

The world of variety has seen many famous double acts- Arthur Lucan and Kitty McShane as Mother and Daughter, Jimmie Clitheroe and his stage mother – Mollie Sugden, and today “The Krankies”, with Wee Jimmy (Jeanette) and her Stage Mother in Pantomime (Ian). 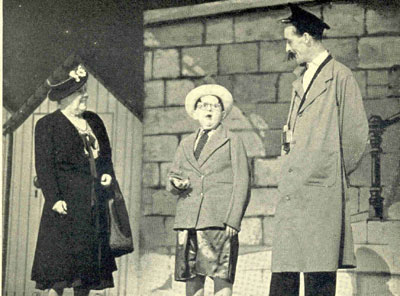 These “Mother and Son” acts owe their existence in part to one of Music Hall’s most famous pairings- Wee Georgie Wood and his Stage mother, Dolly Harmer. From 1917 up until their joint retirement in 1953, George and Dolly were to create an off stage and onstage partnership that would last for over thirty five years.

During this time they played  George’s “Blackhand Gang” sketch, and others throughout the British Empire, and topped the bills in every music hall and variety theatre in the land. All in all they performed over forty different sketches, and transferred their stage sketch into a film in 1930, directed by Gracie Field’s husband Monty Banks.

During the second world war George & Dolly were tireless in their tours for ENSA, travelling into Europe, Asia, Africa, the Middle East, into America, Australia and Gibralta and Malta in their efforts to entertain the troops- Dolly herself (although her age was described as one of Show Business’s ”best kept secrets” ) was already well into her late seventies, and had enough energy to spare to exhaust someone a third her age! 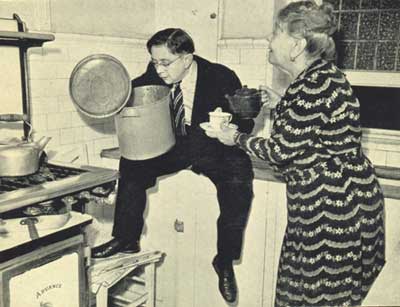 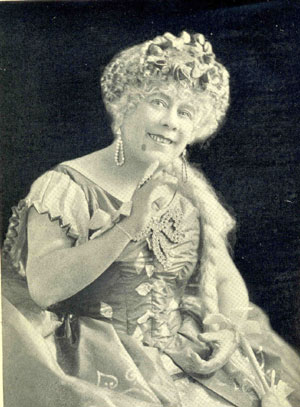 Dolly had two careers during her lifetime, and three if you count her Ensa years when, at a time you would have imagined she would have welcomed retirement, she was travelling war torn outposts by sea plane, trucks and  where necessary tanks to reach the next audience.

“In jeeps, trucks and aircraft she continued to beam at everyone. She has shouted her lines to me across desert air in the teeth of a sirocco. She supervised all our props- when we could get any..”

Dolly Harmer was born in 1867.. She did not begin her association with “Wee” Georgie Wood until she was nearly fifty years of age, when she embarked on her second career- playing his mother in year long tours of Music Halls.

Dolly was born into a theatrical family. Her father worked under the name Peter Harmer. Her brothers Joseph and Frank were both musicians – Joseph in fact played for the Halle Orchestra for a decade. It was not surprising, therefore that Dolly was to appear onstage at an early age.

In 1890 Dolly married the comedian Willie Scott. They were together until she was widowed on  10th April, 1921. During her career Dolly must have qualified for one of the most travelled of Music Hall performers- in the early 1900’s she was appearing in South Africa and Australia long before her exhausting travels began with George Wood during the second world war.

In 1893 Dolly appeared as Principal Boy at the Theatre Royal, Leeds for Walter Reynolds, and continued to play this role for several years, and by 1914 was appearing in “Cinderella” at Her Majesty’s Theatre in Melbourne, as “Ugly Sister”, a role she continued to play in pantomime for most of her career- she played the part in 1916 at the Prince’s Theatre Bristol appearing with Jack Pleasants, Queenie Gwynne, Joe Nightingale and Louie Beckman. The following year -1917 she was in “Cinderella” at the Grand Theatre, Leeds, and again in 1918 at the Royal, Manchester alongside Cicely Courtneidge and Little Tich.

In 1917 Julian Wylie the producer created a role for Dolly, now aged 49 in a stage play originally entitled “The Dummy”, about a detective, starring “Wee Georgie Wood”, who at this point had, at the age of twenty become a major star in Music Hall. Dolly played the gangster’s wife, opening at the Hippodrome in Liverpool.

Shortly afterwards the title was changed to “Some Detective”, playing a tour that began at the Theatre Royal, Plymouth, and Dolly and George were to begin a stage partnership that would continue for over thirty-five years.

George Wood spent most of his life loathing his billing “Wee” Georgie Wood- however, the title stuck, and he was to spend his adult life turning his disability into a very lucrative career.At the age of nineteen he received the shattering news that he would not grow any taller, and at 4’9” remained forever the eternal schoolboy in his sketches and routines. Born in 1895 George was christened George Bamlett, to a very large family in Jarrow-on-Tyne. George’s greatest influence was his Mother,(her maiden name was Wood) who masterminded his early appearances on stage, and he first appeared shortly before his sixth birthday.He first appeared at the Old Jubilee Grounds at Seaham Harbour, and later joined a Pierrot troupe at Barnard Castle before joining the Levy & Cardwell Company touring the Halls. In fact during the 1906/7 pantomime tour of Sleeping Beauty and The House that Jack Built aged 9 he worked with a very young Stan Laurel - Stan Laurel remembers following Georgie around in his adventures as well as playing a character in the Toys Dream Sequence. Financially George soon became the principal breadwinner for his family, and made his first solo appearance at the Burnley Empire in 1908, doing impressions of Vesta Tilley and George Lashwood. 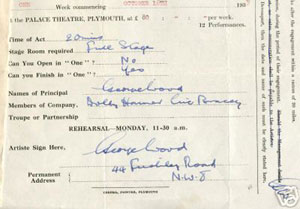 In 1914 Dolly played Ugly Sister at Her Majesty's Theatre Melbourne 1914. Her Ugly Sister partner for that year was Gertie Latchford. Gertie was the wife of Barry Lupino who played comic lead in the show, along with Arthur Stigent in the "Dame-Baroness" role.

Cinderella was played by Polly Castles, The Baron by Jack McCardle, with Minnie Love as Prince Charming. This J.C.Williamson production was extremely lavish (especially for wartime) and included Celia Ghiloni, Maggie Dickinson, Rupert Darnell, Charles Albert, Charlie Gaze along with "Tiny Tot Marjorie & Little Eileen" and the Harmont Four. Further information about this can be found on www.hat-archive.com/cinderella.htm.

From 1917 onwards, George & Dolly toured in Music Hall and variety. Every Christmas George would top the bill in a pantomime, and then would return to the touring circuit. Dolly made several more pantomime appearances after joining George’s company, but  not on a regular basis. In 1922 she appeared in “Cinderella” at the London Hippodrome, produced by Julian Wylie (the man who had employed her five years previously to join George’s act) appearing as Ugly Sister. In the company were Stanley Lupino, Clarice Mayne, Daisy Wood (Sister of Marie Lloyd), Bert Errol and Nervo and Knox- later to become a part of “The Crazy Gang”.

Dolly rarely appeared in pantomime with George- one theory is that her role as George’s Stage “Mother” would of course be replaced by the Dame, as George was invariably the Dame’s son in the plot. She did, however appear alongside George in “Humpty Dumpty” in 1931 at the Gaiety Theatre, Dublin, along with Hilda Kirkby and David Lee.

While Dolly’s pantomime appearances were irregular (and who could blame her if, after touring all year in Music Hall and Variety she could rest over the Christmas period) Georgie Wood had an almost unbroken reign as a Pantomime star from his first in 1910 at the King’s Hammersmith, through his years with Dorothy Ward and her husband Shaun Glenville (playing George’s mother) making several appearances over the years in Glasgow, Manchester, Birmingham and the London Hippodrome. He, along with Dolly was a regular performer on the Wylie-Tate circuit, frequently working with Julian Wylie’s other headliners, such as Mona Vivian in pantomime. 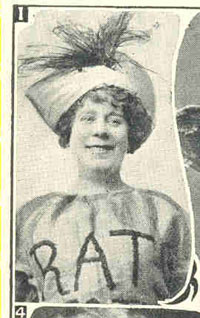 During the time Dolly Harmer appeared with George they made a Royal Command performance at the Victoria Palace on the 24th February 1927, performing “The Black Hand” sketch with Tom Blacklock. In 1930 Dolly appeared in the film of the same name- “The Black Hand Gang” directed by Monty Banks, based on the play by Bert Lee. The cast had George as Georgie Robinson, Dolly as Mrs. Robinson with a supporting cast including Violet Young, Lionel Hoare, Junior Banks, Viola Compton and Alfred Wood.

In over 40 sketches Dolly played George’s mother- frequently Mrs. Robinson in titles such as “Thicker Than Water” (1921) “Mrs Robinson & her Son”, “The Black Hand Gang” and “Funny Go Round” (1946).It was with these sketches that she and George were to set off around the world entertaining the troops for Basil Dean’s E.N.S.A during the war years.

During that time Dolly and George appeared in over 514 shows for the war effort in the United Kingdom, playing hospitals in between travels abroad. In 1946 George’s mother died, and in the same year he was awarded the OBE for his wartime services to entertaining the troops.

Dolly and George both retired from the stage in 1953. George continued with his charity work, and his lodge meetings for GOWR- The Grand Order of Water Rats. This charitable “Show-Business” organisation made George “King Rat” in 1936- presiding over a lodge that included George Formby, Teddy Brown and Teddy Knox.

Dolly died in 1956 aged eighty-nine, after an incredible career that had spanned well over seventy years. George died in 1979 aged Eighty-Two.

We are very grateful to Jeffrey Holland for additional information on Wee Georgie Wood and to Anne Gilhuly for information about Dolly Harmer. 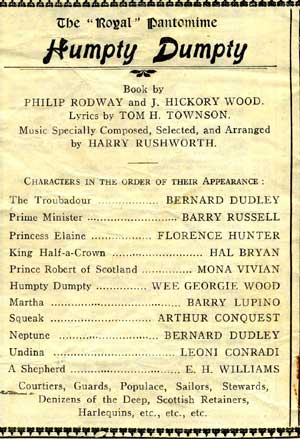