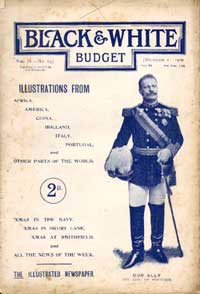 It goes without saying that Mr. Arthur Collins has “gone one better” this year in the production of the Drury Lane pantomime “The Sleeping Beauty and The Beast”- Than even that historic home of gorgeous pantomime production has ever gone before. 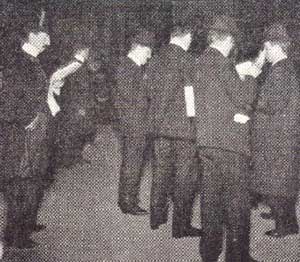 Without any doubt, the scenery, stage effects, dresses and “talent” is right down to date, and the all important piece de resistance more wonderous, mysterious, artistic than ever – and more profoundly a secret till the magic moment of the “first night” arrives. 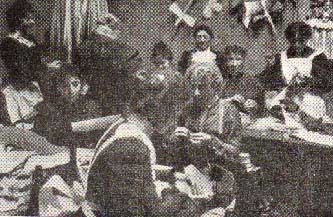 Anyone who has seen “the other side of the picture” will understand what the making of a Christmas pantomime at “the Lane” means: but unless one has seen it, it is impossible to understand the months of work, organisation, originality and thought put into the preliminaries by Mr. Collins and his Genii of the ring before even the first rehearsal can be called.

The services of a whole army of scene-painters, costumiers, electricians and carpenters are engaged months ahead to put the initial touches to their several departments and set the ball a-rolling. The hopelessness, the chaos, the worry, the good humour of the first rehearsal!

Three or four hundred performers, all profoundly at sea, and all talking at once. The chorus master, Mr Robertson, in a dozen places simultaneously, striving to marshal his class. Mr John D’Alban, the ballet master, in a corner teaching the latest in court bows to a dozen dancers. Mr Glover, pounding away unconcernedly at the score on the bass-throated piano. Mr Moore, with everybody’s business from the fireman’s to the leading lady’s to look after, as well as his own, and Mr Collins quietly deciding in his own mind where a touch or two in the score he is reading will be needed to light the picture up.

In another corner the inevitable unget-on-withoutable DAN LENO with HERBERT CAMPBELL sandwiched in a funny story between a running fire of comment on their scores, for Daniel is to play the Queen to Herbert’s King. The four thin men of the fat man’s ballet are working their way out among the stage carpenters, backwards on all fours, as required of them in their part, unconscious of the havoc they are working behind them, and the bow bow quartette are humming harmoniously together the chorus of their “Doggy Song”. 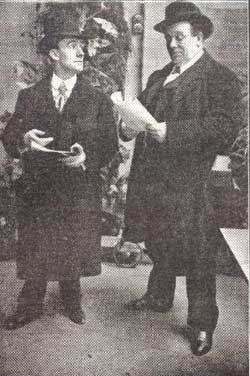 Downstairs in the “schoolroom” some of the children are hard at work upon their lessons, according to Board School requirements, while others are revelling in the delights of xylophone practice. “Six beats all together on number three” says the instructor patiently, as he goes over and over again the first few bars. For, instead of notes, the little wooden keys are numbered, and the youngsters learn to play it as it were by rule of thumb. Quick little pupils they are too, for in about ten minutes they are able to hum the tune of the first few lines, and incidentally show their neighbours how it should be done.

In old skirts, with  many faded relics of ancient glory clinging to their tattered laces and frills, more children are learning to “Catherine Whel” while a willing little mite of twelve bangs out a waltz tune on an old property piano. Across the road, on the balcony of Covent Garden, another group of youngsters are whiling away the tedium of waiting for their call by engaging the passers-by below in spirited conversation about having their photograph “took” for a mysterious institution called “a piper!”

Back again on the stage, Mr Collins is “walking through” the leading lady’s part, to show her how it should be done, or instructing the “spinning wheel chorus” in the mysterious arts of spinning and how they should place their hands in imitation of the actions.

Everywhere it is the same thing- unreadiness, mistakes and good humour- till one wonders in despair if the pantomime will be ready in six months hence, instead of in a couple of weeks, and one realises that nothing short of a Kitchener- which happily for Drury Lane it possesses in Mr Collins- could pull it out of the chaos in time to meet the demands of those in search of Christmas pleasure.