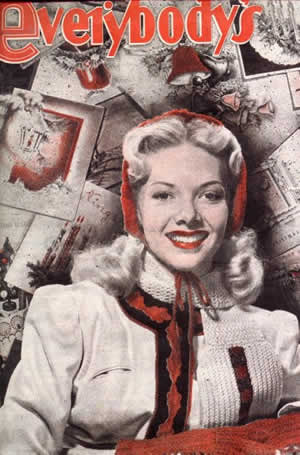 “Principal Boys, slim and sprightly, for glamour and publicity: Dames, shrewish and flighty, for gags and applause”, such is a pantomimic recipe, older than most of us.

This Christmas, faithful as ever to this quixotic jumble of magic, mirth and incongruity, the curtain rises on some 220 pantomimes scattered about our island. With each separate debut, much of the hoydenish business that creates a ripe Widow Twankey, Dame Trot, Wicked Baroness or Chinese Laundrywoman will be resurrected with, of course, a spicing of fresh topical allusions.

Pantomime is like that. Our hoariest form of theatrical art, it derives from the Roman feast of Saturnalia, when men aped women and vice versa in dumb show. That interchange of the sexes is but one convention long deemed inviolate.

Of those enriching its bespangled story none, assuredly rank in artistry beside the deathless Dames. Principal Boys are by nature more glamorously endowed. But for genius in interpretation of pantomime’s roisterous essences, give me the spry bewitching grimaces of Dan Leno, the twinkling massively outsize boots of Little Tich, the vast buffoonery of Herbert Campbell, or that comical sprite reincarnated in every fresh generation of Lupino males, once it puts on skirts! 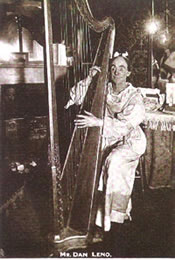 In 1864 was born Dan Leno, the master Dame of all, under the forbidding name of George Galvin. Six years later his father dumped a carpet bag on the stage of the Old Steam Clock Music Hall in Birmingham. The bag wobbled, came to life. Out popped an electric eel of a lad. He began clog dancing frenziedly. There seemed no stopping him. There was none, until overwork overthrew his poise and killed him.

In 1888, as the Wicked Baroness in Augustus Harris’s production of “The Babes In The Wood”, Dan Leno arrived at Drury Lane. His salary was a mere Ł28 a week. There he stayed, Christmas by Christmas, for fifteen years, earning finally Ł240 a week – or Ł20 a performance- while his incredible drollery transformed the lane into the House of Pantomime.

Almost alone in the world, the dramatic critic of the “Saturday Revue”, an assertive young chap named Bernard Shaw, applied the phrase “dismally Futile” to a Leno performance.

With Leno in that 1888 pantomime as one of the babes was Herbert Campbell, his future team mate. The two of them, becoming bosom pals in private life, formed a divertingly spectacular assortment.

In “Mother Goose” as the distraught market woman, Leno scored perhaps his best loved success. Driving onto the stage in a donkey cart with a crate of live geese beside her, the old market woman, donkey, geese and all were suddenly spreadeagled by a new-fangled motoring machine, hooting vociferously. Thereupon Leno became all distraction, scurrying hither and thither now lifting up the donkey, then chasing his flock. Never a word spoken, just a glorious riot of thwarted intention, performed with feet that talked like comic headlines, eyes that bubbled excitement, hope and frustration, and a body that flicked about like quicksilver.

It was the same when, as Widow Twankey in “Aladdin” he set off in pursuit of the bad Chinese policeman. Like any old Dame, he got hot, confused and tied up his skirts. But how? Inspired and seemingly artless were his embarrassments. And he never stooped to vulgarity.

Campbell had a great booming foghorn of a voice. Dan’s in contrast squeaked plaintively. Yet, I daresay, half a million

elderly people in Britain today would surrender their Christmas dinner (this is no reflection on austerity) to hear Leno again tell of that dog with no tail, “who sat wagging his nothing at me”.

When he and big Herbert got themselves lost in the enchanted wood, they invariably fell asleep under leafy bombardments accompanied by, of all the soothing lullabies, the angel’s hymn from Hansel and Gretel. Twenty years sped by in a twinkling.

On waking up each babe was concerned to find time had presented him with a most Christmassy beard. And Dan had an extra gift. Out of the hairy depths, he shrilled “I’ve got a mouse!” He was then irresistible, as he brought forth the wee beastie, which had nested in his beard, and for the rest of the scene twiddled it about on a piece of string. So sharp was his observation, so exact and true to life, that his impersonations, female or male, were never merely caricatures. Each was a sharply etched study. Every time he played a woman’s role, it was a different woman his audiences saw- an inimitable character presented with all her arches and archness.

Sometimes a third giant of fun appeared with the Leno-Campbell team, though he was, in stature, a veritable dwarf. But dress Little Tich in ballet skirts, give him boots about three feet from heel to toe, and let him mime and tap dance and he was a wizard even among wizards.

Being deformed of body, he was abnormally sensitive, and temperamental.

Once he nearly brought Arthur Collins, who succeeded Harris at the Lane, to ruin. For, on this particular night, Little Tich kidnapped Leno and Campbell, and at a tavern near Covent Garden the three comics soon lost their wits in an all out blinder.

With the three stars missing, the show being due to start almost at once, Collins was angry and worried. He lacked any capable understudies. A search party was sent out, unavailingly. Then a messenger brought him a much daubed envelope, from which he took a telegram even more lamentably smirched. On it, barely legible, he read “ Sorry we can’t appear tonight we’ve all three got typhoid fever. Leno, Tich, Campbell”

Poor Dan Leno. Some of his friends maintained that it was his early clog dancing which, having sapped his strength, brought him to his tragic early death at 44. Success burnt him out, but not through any inflation or vanity. It was the strain imposed by an insatiable public which first turned him mental and wrecked him.

Even to the end, he jested. As he contemplated his emaciated face in the mirror, he blurted out: “I’ll have to spell my name L-E-A-N-O now.” That was the last gag – and a very gallant one- of about the bravest great “little man” who ever trod the boards.

A magnificent dame also, peerless as a gagger and the despair of script writers, was Arthur Roberts. For three decades, including the “naughty Nineties”, he was the idol of what he termed London’s jeunesse stage doree, the gilded youth of fashion of his time. They slavishly copied his flamboyant style of dress. They slavishly retailed his saucy jests. Laman Blanchard, a noted writer of pantomime scripts, used to grow white in anger while Roberts improvised merrily infront of applauding houses, “murdering the book”. But Arthur never relented. Once a producer remonstrated with him because he was wearing his sword strapped on the wrong side. “Very well then, “ Countered Arthur, “Order the ship to turn about!”

He, too, fell on lean days. But his naďve wit never forsook him. Warm heartedly, C.B.Cochran kept him going with small parts when he was long past his prime. Not for the first time Arthur proved “a poor study”.

In last winter’s floods that wonderful Dame Trot, G.S.Melvin- the last Dame, incidentally, to appear at Drury Lane- standing on a bank at Datchet by his own home, lost his balance was tragically washed into the swirling overflow and drowned.

Many admirers hailed Melvin as the finest Dame since Leno. Like Leno, he lived his part, be it barmaid, girl guide, schoolmarm or postmistress, devoting hours to consummate study of individuals.

One of the very grandest of these ageless old women still happily with us is Shaun Glenville. Apart from the effervescent Lupino brood, we have also George Lacy, superb as Mother Goose, Harry Gordon, the Scottish comedian and invariably the pantomime team mate of the late Will Fyffe, Freddie Forbes, George Bolton, Charles Harrison and others- all faithful servants of skirt-laced comedy.

Father Of Them All

Yet from any pantomime portrait gallery it would be churlish to exclude the man who fathered them all, Joe Grimaldi, the original “Joey of Clowns”. Though he lived in an age when the Harlequinade was the Pantomime Proper and Dames, as fairy story accessories, were mere shadows, he deepened pantomime’s hold on the people tremendously by his own inspiration. What Leno did for the lane, he from 1806 to 1825 did for Sadlers Wells.

Among his achievements was standardisation of the clowns dress. He launched a thousand startling eccentrics, and in 1819 in a pantomime called “The Talking Bird” when he sang for the first time his famous “Hot Codlins” (toffee apples) song, the panto hit of the century, he had the further brilliant idea of getting the audience to supply gaps in his lines.

One verse ran:- “A little old woman her living she got

Though her codlins were hot she was very cold

So to keep herself warm she thought it no sin

Boom went the big drum. And simultaneously, as if expressive of a tornado, the audience yelled “Gin!”

One admirer wrote of his art simply, and I think grandly, thus: “Whether it is to rob a pie man, open an oyster, or imitate a chimney sweep or dandy, grasp a red hot poker or devour a pudding or take snuff, sneeze, make love, mimic a tragedian or nurse a child, it is all performed in so admirably humorous and extravagantly natural a manner that spectators of the most saturnine dispositions are irresistibly moved to laughter!>

The great Joe paid with his life for keeping the world amused. Having often performed in three pantomimes nightly, he appeared in an armchair, a broken worn out old man of 48, to take farewell of his fans at Sadlers Wells on March 17th 1828. Pathetically but bravely, he enacted from his invalid seat a familiar pantomime scene. Cheers and tears greeted him tumultuously. Nine years later he was, as the saying is, gone. But like the great Dames in the dynasty he founded, that which was quick and vital, inventive and glorious in his comedy lives on, to pantomimes perennial enchantment.