Possibly the most star studded production of the pantomime “Cinderella” was staged for one night only at the Drury Lane Theatre Royal. The Charity gala was presented by Nigel Stock, on behalf of Clover Leaf Productions, written and directed by John Nathan-Turner. All proceeds went to the Brookland Primary School Swimming Pool Fund, and a donation to “Save London’s Theatres Campaign”.

staged “Cinderella-New Grand Allegorical Pantomime”, although it was to be many years before it took on the form we would recognise today.

This charity production boasted a cast of stars of screen, stage and predominantly the West 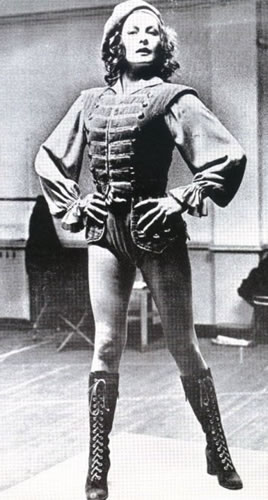 End.(Dame) Judi Dench appeared as the Fairy, with Peter O’Toole a mere walk on- “Attendant at the gate”. Guests at the ball included the British film legend Jessie Mathews, Elaine Stritch, Joss Ackland and Marti Webb, attended by the footmen played by Richard Briars and (Sir) Donald Sinden.

The policemen were gleaned from popular television “Policemen” including Peter Byrne (Dixon of Dock Green) Stratford Johns and Frank Windsor (Z cars/softly softly) while a band of fairies looked after the proceedings- including Patricia Hodge, Isla Blair and Mela White in their number.

Buttons was played by Julian Holloway, and Cinderella by the musical star, Anne Rogers. Her wicked step-sisters were played by Bryan Pringle and Victor Maddern, as “Dolores and Fabrina”. The valet Dandini (or “Spencer” in this production) played by Jan Waters, with Sheila Hancock as Prince Mark.

All in all, a spectacular cast for this, the most popular of pantomimes! 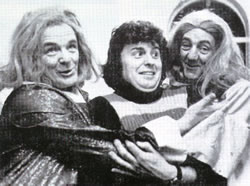 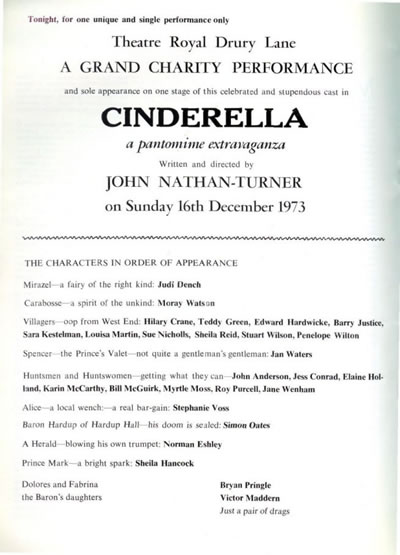 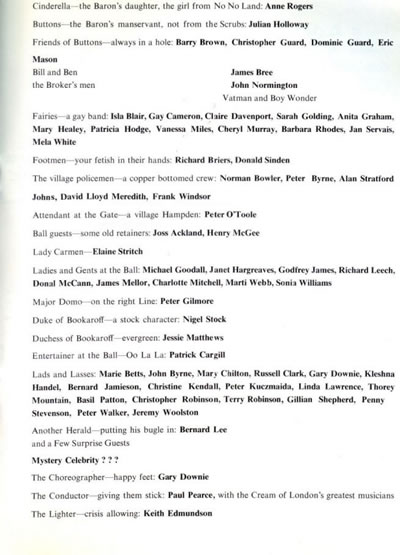