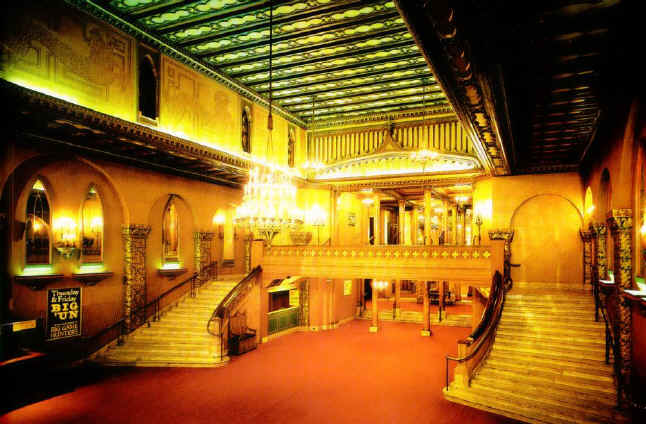 The Granada  Theatres- vast picture palaces situated throughout Great Britain played host not only to films, but throughout its existence to live shows, and pantomime in particular. The first Granada opened in 1930. Picture houses with romantic names like “Rialto”, “Plaza”, “Empire” and “Palace” became part of the Granada chain of cinemas. Buildings that housed vast auditoriums, and frequently small stages were hosts to cine-variety and during Christmas, traditional panto. 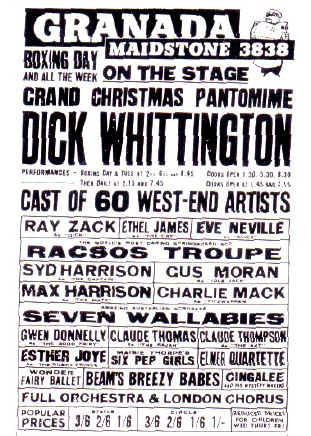 Granada Cinemas became famous for their pantomimes after the second world war. In the 1930’s several pantomimes were produced, including the 1936 “full length, complete” “Jack and the Beanstalk” with a cast of sixty at Tooting. (January 6th and week, 1936).The pantomime was supported by the feature film “Ginger” and a short.

During August, 1938 “Snow White and the Seven Dwarfs” was performed live with two films in support at Clapham Junction. The first and only pre-war pantomime was “Dick Whittington” which opened at Maidstone on Boxing day, 1938 and moved to the Plaza, Rugby on 2nd January 1939.

The number of live shows in Granada cinemas was increased as a result of the film drought in the second half of 1947. Clapham Junction Granada staged “Babes in the Wood”, which featured over seventy artistes, a stage crew of twelve and four lorryloads of scenery. The Pantomime played Tooting for two weeks, moved to Sutton and then Woolwich for a week, ending up at Clapham Junction for six days. This Pantomime starred Jimmy Hanley, Adele Dixon and Jean Collin.

At the same time “Cinderella” played at Shrewsbury  and Rugby. It featured Marie Bailey, Phyllis Terrell, Len Clifford and the Granada Babes. “Aladdin” at Maidstone starred Cyril Fletcher and Joan Turner, playing until the 10th January, 1948.

Pantomimes in 1948 were “Aladdin”, starring Ralph Reader (of “Gang Show “ fame) and The Smith Brothers, playing the Tooting, Sutton, Woolwich and Clapham circuit, and “Dick Whittington” with Guy Fielding and Joan Winters at Shrewsbury and Rugby.

In 1949 Granada presented “Aladdin” with Joan Haig and Sirlani for three weeks at Shrewsbury, and “Dick Whittington” with Jimmy Hanley , Low & Webster and the Radio Revellers  on tour.

The Fifties were the heyday of the Granada Pantomimes.

Popular comedian Derek Roy and Joan Dowling starred in “Robinson Crusoe” in 1952  on the tour, while Hal Monty appeared in “Babes in the Wood” at Shrewsbury and Rugby. The Granada Pantomime at Walthamstow that year was “Jack and the Beanstalk” with Peter Butterworth and his wife, Janet Brown.

“Cinderella” with Jimmy Hanley played the 1953/4 season at Shrewsbury and Slough, while in Woolwich Terry-Thomas starred in “Dick Whittington” , having previously opened in Sutton. 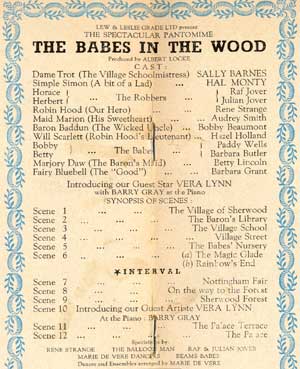 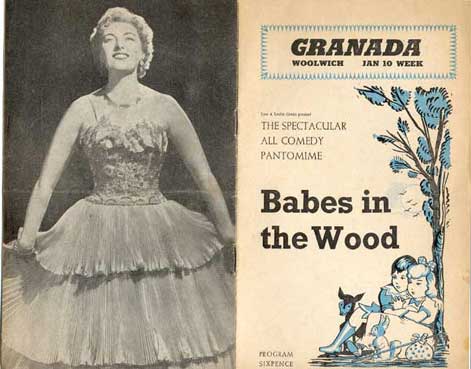 1954 saw Vera Lynn join as “Special Guest Star” in the Tooting “Babes In The Wood”, with Hal Monty and Sally Barnes, touring to Sutton and Woolwich. 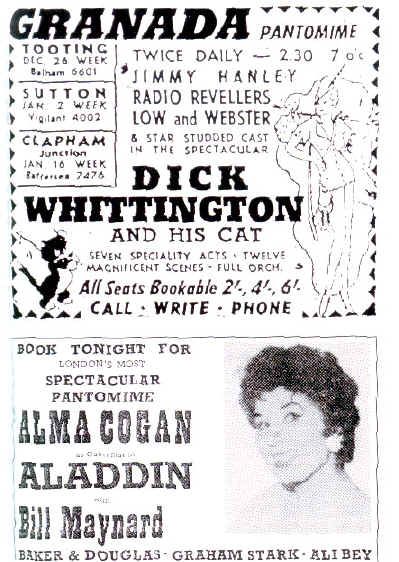 Tommy Trinder starred in the 1955 “Cinderella”, on the circuit, while “Sleeping Beauty on Ice” played Shrewsbury and Rugby. The following year Alma Cogan was “Guest star” joining Bill Maynard in “Aladdin” for the 1956/7 pantomime at the Empress Brixton, followed by Sutton and Woolwich. “Cinderella on Ice” played Shrewsbury and Chelsea Palace presented “Alice in Wonderland “ with Mandy Miller.

After Cinemascope started, there was a drop in the number of live shows. Pantomimes were suffering from the changing times. “Robin Hood” at Tooting, Woolwich and Sutton in 1957 proved to be the last of the Tooting Granada pantomimes. “Robin Hood” starred Terry Scott and David Hughes. At Tooting they were joined by the “Queen of the Keyboard, Winifred Atwell as Guest star, and continued to Sutton, Slough and Woolwich.

Christmas 1958, Granada staged no pantomimes, but it did return the following year to Shrewsbury and Woolwich headlined by the pop group “The Mudlarks”.

These decades saw the last of the Granada Pantomimes. The number of productions declined, and by the 70’s only one pantomime remained. 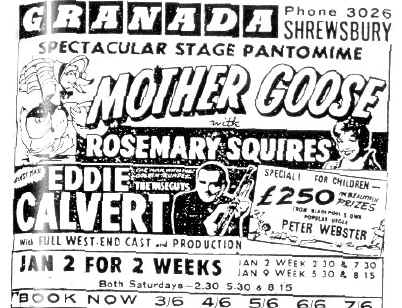 1960/1 saw Rosemary Squires, Eddie Calvert and Peter Webster in “Mother Goose” at Shrewsbury and Woolwich. There was no pantomime the following year, and then in 1962/3 “Cinderella” played Shrewsbury, Sutton and Maidstone with Richard Hearne (Television’s “Mr Pastry”) and the Dagenham Girl Pipers! Quite where these ladies fitted into Cinderella is a mystery- possibly the performed a concert in the Grand Ballroom?

In 1963 Joe Brown and the Bruvvers played in “Aladdin” at Shrewsbury, Sutton and Brixton. The next year saw the return of Richard Hearne in “Puss In Boots” with Davy Kaye. 1964 was a good year for pantomimes, with Dick Emery and Sid James teaming up in “Babes in the Wood” at Shrewsbury, Sutton and East Ham, and Jess Conrad and Millie appearing in “Once Upon A fairy Tale” for Granada.

Sadly- after this there was only one Pantomime left in the Granada history. The years 1965 to 1969 saw a few live shows starring artistes such as Hughie Green, Hylda Baker, Fred Emney and Norman Vaughan.

The final Granada Pantomime was “Cinderella” at East Ham starring Tony Blackburn, Anna Karen and Valentine Dyall. It played from the 23rd December 1973 to the 19th January, 1974.

The information is taken from “The Granada Theatres” by Allen Eyles 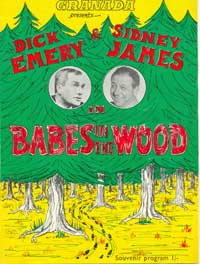 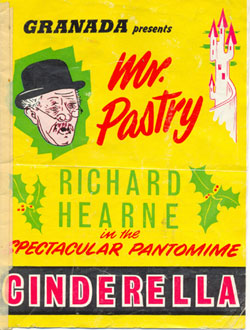 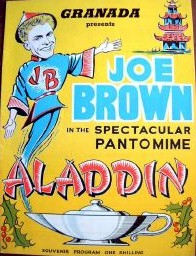 Anna Karen was the star of the last “Granada” Pantomime at the East Ham Granada, 1973/74. Speaking to Anna this week she recalled some of her memories of that production of “Cinderella”.

Anna was filming “On the Buses” in her role as Olive, and was booked to play “Fairy Olive” at the Granada. She joined Tony Blackburn, who played Buttons, and Anne Aston, from “The Golden Shot” as Cinderella. Playing the role of Baron Hardup was the veteran actor, famed as “The man in Black”, Valentine Dyall. The Ugly Sisters were played by Terry Gardener and Hugh Futcher, with Monica Dell as Prince Charming.

Anna recalls “we had two weeks rehearsals for the show. I had been booked by Bill Kenwright for the panto at East Ham. It was directed by Ralph Reader….”

Ralph Reader, famous for his “Gang Shows” had previously starred in a Granada pantomime in 1948

Anna’s memories of the East Ham Granada Theatre were that they played to capacity houses..”Business was really great, and I was rebooked the following year, along with Tony Blackburn, Hugh Futcher and Monica Dell. The stage area and dressing rooms were in a terrible state- we ended up cleaning the place before the dress rehearsal.”

Anna remembers the crew vividly…”they were all dockers, working shifts, then coming into the Theatre to do the shows. One day they just upped and left. Went on strike, leaving just one called “Boiler”. He stayed, and along with Terry (Terry Duggan, Anna’s husband who is a popular comedian) they held the show together until we got more crew in the following night..”

Anna also recalls the scenery collapsing on Tony Blackburn..” It fell down, all around him while he was singing..” but being Panto, it was all part of the fun for the packed house. The season ended on the 19th January, 1974, and The last of the Granada pantomimes came to an end.