Here at IBY we love a good mystery! Several times in the past we’ve discovered an old faded photograph, or a document, and, with the help of our contributors, we’ve been able to piece together a little bit of the history behind it.

Here we have another- not so much a mystery as a brief glimpse into the world of pantomime in the late 1940’s and 1950’s- the life and times of Hilda Campbell-Russell, Principal Boy for over twenty years during that period. 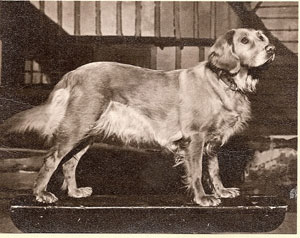 I acquired an old photo album. Enclosed were two programmes, featuring Hilda as Principal boy. The album was most certainly hers, and I have to admit I knew nothing about her other than the photographs neatly placed in the faded album. Pride of place was given to a Labrador dog called “Diana”- a constant companion by the looks of it, and it was Diana’s photograph that graced Hilda’s Christmas card , printed with the address 25, Homersham Road, Kingston-on-Thames. 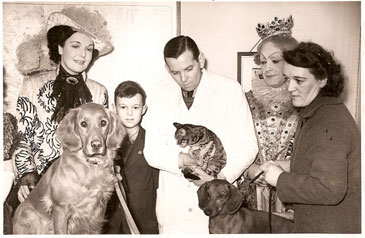 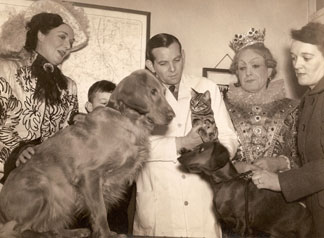 Hilda and Diana - From The West Herts Post newspaper - a local vet visiting backstage at either The Coliseum Harrow or Palace Theatre, Watford.

A little investigation revealed that this lady had trod the boards in pantomime, musicals, plays and film from the 1920’s right up until a few years before her death in 2002.

Hilda  Campbell-Russell was born in Dublin on October 20th, 1904. By 1918 she was enrolled at the Italia Conti Stage School, and made her first appearance in “Peter Pan” a year later. For the next seventy years she worked in theatre.

Her Mother, Elaine Spearing, had been an actress, and her Father was an Irish racehorse trainer. She had a sister Patricia.

In the “Flapper” era, Hilda was obviously a lively energetic lady- apparently she was the first woman to ever compete in a game of polo! By 1926 she was touring in South Africa with the play “White Heather”, and returned to London to play Cora- the “vamp” –in “The Five O’Clock Girl” at the Hippodrome. One of the gentlemen of the chorus was John (later Sir John) Mills.

Silent films became “talkies”, and Hilda was one of the actresses who embraced this new medium, and appeared in British films from the early 1930’s. Never a star, Hilda worked frequently in various roles for Gainsborough Studios, and  later for several other studios both in Britain and abroad.

In 1933 Hilda became one the earliest “supermodels”, as the face of Burberry.

Among the thirty films she made appearances in were “Java Head” (1934), “The Dictator” (1935 starring Clive Brook and Madeleine Carroll) and the film revue “Miss London” (1943) alongside Arthur Askey and Richard Hearne, and “They Met  In The Dark” with James Mason. That same year Hilda tours with the thriller “Payment Deferred” appearing at the Richmond Theatre.

Each year Hilda appeared in Pantomime playing the role of Principal Boy. Prince Charming was her speciality. She appeared frequently in pantomime for Andrew Melville, often at the Palace Theatre Watford, and at the Coliseum Harrow- both theatres close to her home in Kingston-upon-Thames.

Andrew Melville (born 1912) was  the nephew of Walter and Frederick Melville, producers of major pantomimes, especially at their Lyceum Theatre (currently the home of “The Lion King”) which they acquired in 1909. He took over the Lyceum after the death of his uncles in 1938.

By the 1940’s Andrew produced, wrote and directed the Palace Watford pantomimes, and was proprietor of Watford Palace from 1939 to 1956.

He served in the navy during the war, returned to the Palace in 1946, presenting repertory and the annual pantomime. He became co-manager of Richmond Theatre from 1947 to 1950.

These photographs seem to be from productions at Watford and possibly from Harrow.

The Coliseum Theatre in Harrow was redesigned in 1940. It had formerly been a cinema (built by the founders of Hammer Films in 1923) and was now to be a live theatre for use by Alfred Denville, MP. (today best remembered for “Denville Hall”, the actors’ home which his fund raising created).

Harrow Coliseum was a two thousand seater, and the “new” theatre was opened by Queen Mary.

Hilda’s career in film and theatre continued. In 1944 she had a leading role in “Two Thousand Women” for Gainsborough Pictures. Set in a women’s internment camp in France she played Mrs Hope Latimer opposite Flora Robson, Jean Kent and the young Thora Hird. 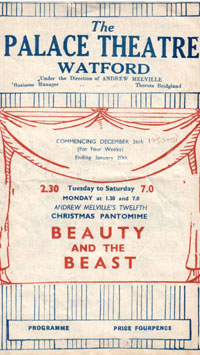 A Year later Hilda has a small role in “The Wicked Lady” with Margaret Lockwood, and in 1951, having finished playing Prince Hal in “Beauty and The Beast” at Watford,  she makes an appearance in “No Highway” with Marlene Dietrich and James Stewart.

In the 1950’s she toured in a revival of “Floradora” and “The Desert Song” (with Mary Miller and Nicholas Smith), and during the 1960’s  she appeared in the revue “Six Of One” in London alongside Dora Bryan, Dennis Lotis and Amanda Barrie. 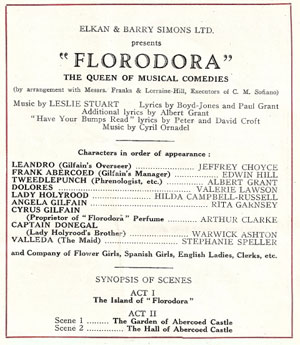 She appeared in the film “City Under The Sea” with Vincent Price (1965) and in the same year had a small role in “The Knack” with Rita Tushingham.

Hilda’s career continued with appearances in ATV’s “Crossroads” as Peggy Leonard- she was now in her seventies, and her last television appearances were made when she was Eighty-Six, appearing in the first episode of “Waiting For God” with Stephanie Cole (1990) and when she was interviewed for a television documentary  called “I used to be in pictures” in the year 2000, when she was a spry  ninety-five year old!

That year she left her home in Kingston to be nearer her sister Pamela, and the long life and career of Hilda Campbell-Russell came to an end on June 19th 2002. She died at the age of Ninety-seven, having experienced all facets of theatre, pantomime and the creation of talking pictures. She never married.

Hilda wrote her autobiography called “A Zest For Living”. She attributed her energy to a small tipple each day- “Whatever I was doing, wherever I was, I had to stop for my daily Guinness, I believe that it has contributed to my longevity!”

This small album is just the briefest of glimpses into her world of pantomime- a few brief years between the late 1940’s and the early 1950’s. 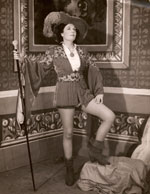 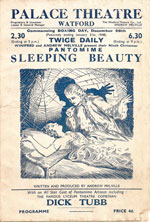 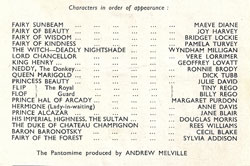 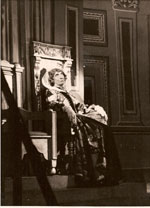 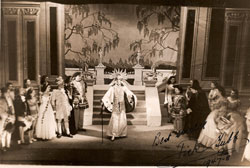 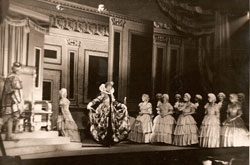 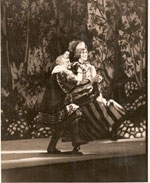 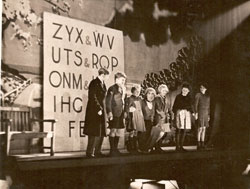 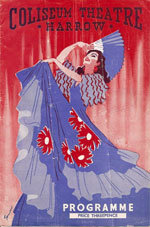 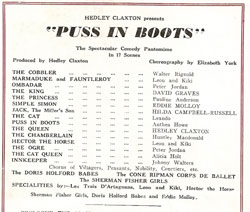 The following photos are not attributed to any specific production or year, but probably Coliseum Harrow or Palace Theatre, Watford 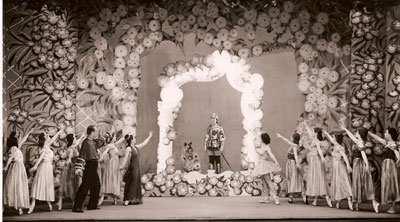 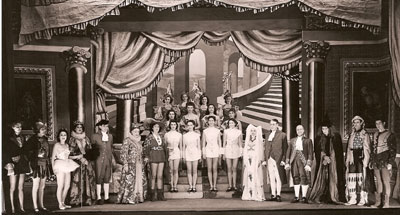 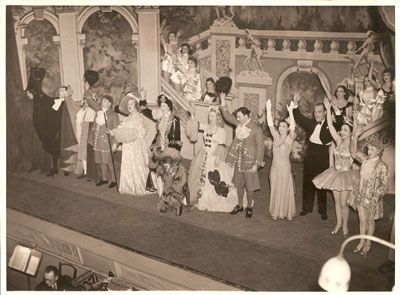 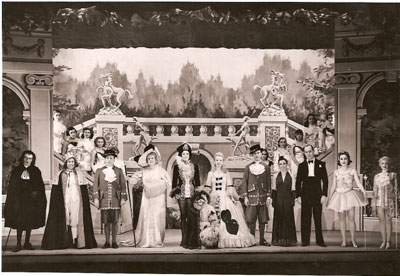 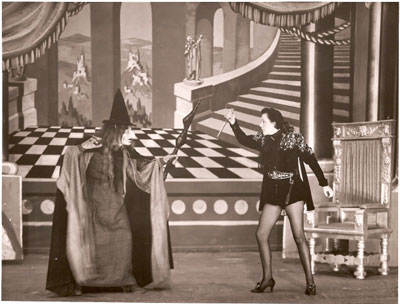 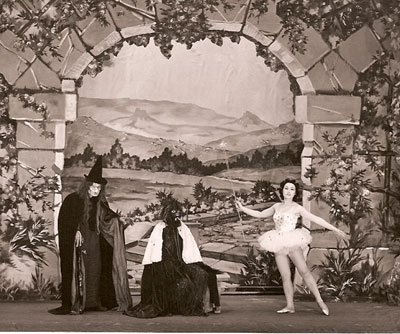 ROBIN HOOD or BABES IN THE WOOD 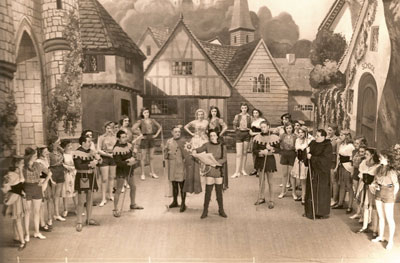 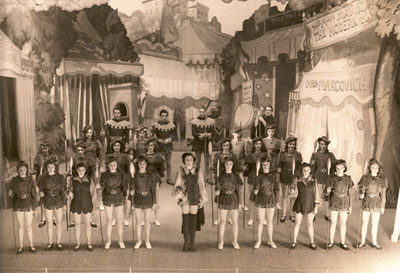 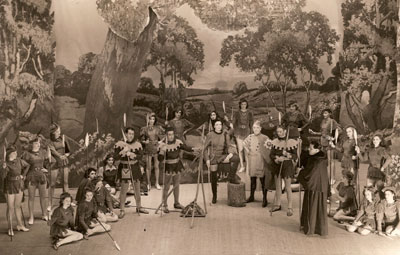 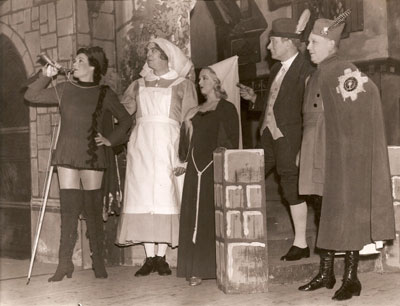 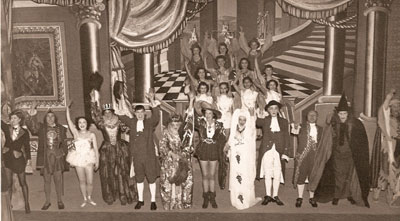 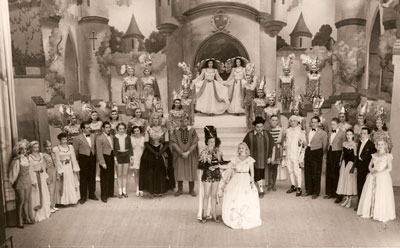 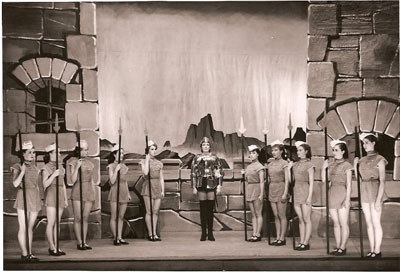 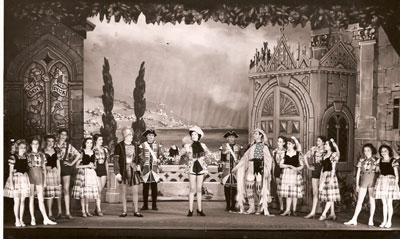 If you have any further information about Hilda, please contact us at info@its-behind-you.com