60 Years of Pantomime and Beyond 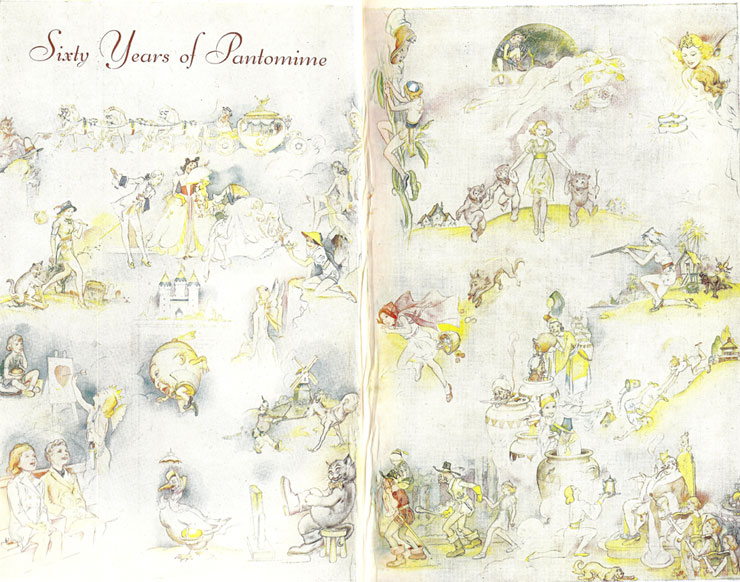 In the list of eminent Pantomime Producers - Augustus Harris, Arthur Collins, Walter and Fred Melville, Robert Courtneidge, John Hart, Robert Arthur, Frances Laidler, must be included Fred Wyndham, one of the founders of Howard and Wyndham Limited. It was the policy of the firm to continue the tradition of F.W. Wyndham's productions and to either produce pantomimes themselves or bring in the likes of Littler or Wylie-Tate to produce shows at their theatres.

James Brown Howard (real name Michael Cornelius Hoban) came from Ireland and started as a dramatic actor eventually forming  a business partnership in 1876 in Edinburgh with Robert Wyndham, who had become a principal actor in William Murray's company at the city's Theatre Royal. Young Fred Wyndham followed his father's acting footsteps and in 1883 entered partnership with James Howard (after Wyndham senior had retired) to build and run the Royal Lyceum Theatre in Edinburgh. In the same year the new partnership also leased the Theatre Royal, Newcastle, until 1895, and followed the tradition of the previous lessee Charles Bernard (whose base was the Gaiety Theatre, Glasgow) and the tradition of the lessee before that – William Glover (whose base was the Theatre Royal, Glasgow) – and developed eleven highly successful pantomimes there, some of the books being written by Mrs Howard including the 1887 pantomime. At Newcastle their pantomimes were

1891   ABDALLAH AND THE FORTY THIEVES

(From “THE THEATRES ROYAL in Newcastle upon Tyne” by Harold Oswald, 1936, provided by Graeme Smith.)

The initial list of 60 years of H&W Pantomimes was compiled from the book of the same name, we are attempting to fill in the gaps especially after 1948 and any information which you have will be gratefully received. Please email it to us here at IBY and we'll try and complete the listings for H&W.

H&W Produced Pantomimes here from 1912 but we do not have details for these.

We are also missing pantomimes for other theatres in England of the Robert Arthur / Howard & Wyndham Limited combine. Also omitted are those of H&W's Aberdeen and Dundee theatres.

Many pantomimes after 1948 were also in theatre in England, including the Wish for Jamie Series.