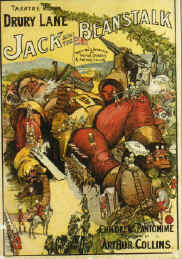 The origins of 'Jack and the Beanstalk' are possibly German, where many folk tales of slaying giants are to be found. In British folklore there are tales of 'Jack the Giant Killer', a Cornishman who is said to have rid Wales of all giants.

The first play on the subject was produced by David Garrick in 1773 at Drury Lane, taking its theme from an early eighteenth century folktale. The first Pantomime version of 'Jack and the Beanstalk' was in 1819, which also marked the appearance of the first ever female 'Principal Boy', Eliza Povey, in the role of Jack.

The hero, Jack, is a typical folklore hero, lazy, unscrupulous but with a heart of gold. In the Pantomime Jack is sent by his mother, usually called Dame Trott, or Dame Durden to sell their favourite, and only cow 'Daisy'.

'Daisy' as the cow is generally called is one of the most endearing of the 'Skin Parts', a name given to animal impersonation in Pantomime. The part involves pathos, comedy and two actors who spend a long time inside an often heavy and uncomfortable 'Skin'! The comedy scene involving the Dame milking the cow is a pantomime classic.

Jack, having taken the unwilling Daisy to market is tricked out of his money, and returns home with a handful of beans. These beans, when thrown out of the window by the disgusted Dame, are in fact 'Magic' beans, and a giant beanstalk grows on stage. Usually Act One ends with the hero, Jack starting to climb the beanstalk.

The scenic effects for Act Two are often the reason 'Jack' is not done as often as other pantomimes. Giant sized furniture has to be constructed, and the giant 'Blunderbore' himself is often portrayed by an actor on stilts, a giant hand, or as seen in the E&B productions pantomime, an incredible creation that fills the stage, worked by hydraulics, a giant that can pick up the Principal boy with one hand. The Giant's cry of 'Fee-Fi-Fo-Fum, I smell the blood of an Englishman!' is known to every child in the audience before it is uttered.

Recent additions have included a witch, often the Giant's mother, and Fleshcreep, a sinister toady who, being more agile than the giant, can do most of his bidding. The Pantomime ends with Jack, now in possession of the Giants treasure, chops down the beanstalk, having slain the giant with his magic sword.