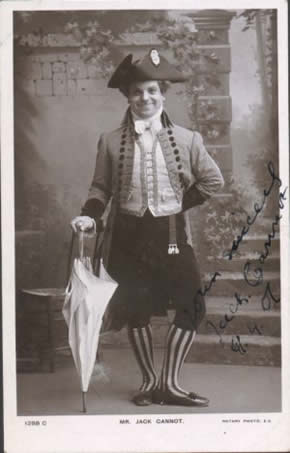 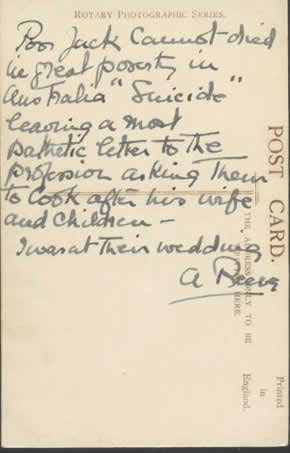 The purchase of a postcard led to several enquiries about the life of Jack Cannot. When the card was offered up on e-bay, we noticed it had a handwritten piece on the reverse. The signature was 'A.Reeve'. The most likely 'A.Reeve' was the Music Hall star, Ada Reeve. After investigating we discovered that Ada Reeve had in fact made several appearances in Australia, and she seems the likely candidate to have attended the wedding of Jack Cannot in either Great Britain or in Australia. The card shows a photograph of Jack playing  a comic role in pantomime in 1906/07, prior to his arrival in Australia.On the reverse was written the following: "Poor Jack Cannot died in great poverty in Australia "Suicide" leaving a most pathetic letter to the profession asking them to look after his wife and children- I was at their wedding" signed A Reeve. In 2005 we had a communication from Chris Jones, who is Ada Reeve's great great grandson and he has confirmed that the handwriting on the card does belong to Ada - he has compared it to a lot of correspondence between Ada and her daughter Goodie, who was in fact an early Sydney Australian Radio personality.

We have also been contacted by the author of a book on Australia's music halls and theatres in Perth requesting a copy of the Cannot photograph for inclusion in his book. He in turn sent the Sydney Daily Telegraph obituary (2/8/1929) from which most of the information has been obtained. 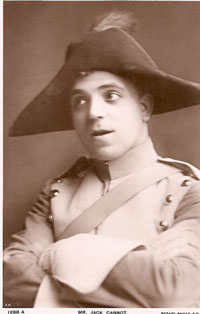 John Valentine Cannot, known as comedian Jack Cannot was found dead in the scrub on the Long Bay rifle range, Sydney on 1st August 1929. He was aged 46 years, and was the Vice-President of the Actors' Federation. In his pocket was a packet containing poison.

In several letters he wrote he indicated his intention of taking his own life. 'Alas Poor Yorick', he scribbled in lead pencil on the following letter sent to Charles Dunn, the secretary of the Actors' Federation:

'My Dear Old Charlie '“ when you get this it will be a case of 'Alas poor Yorick', and I want you to do your best for my family who are more or less destitute. I have fought against what I intend to do, but it is the only way I can see clear to enable my children to get a proper education and my darling wife to feel that every postman's knock does not contain a summons.

Charles, I have the greatest wife and children a man could wish for, so you can guess with what heart yearnings I am leaving all I love best, but I cannot get decent work. I have had 26 weeks work in two years, and then I got 'scaled' for Â£70. Now old sport, you and Walter '“ God bless you both '“ will do what you can for my loved ones, especially my boy. Oh, what a grand little fellow, and how I worship the ground he walks on. He had been at college since he was nine years old, and he is 14 and 2 months now. I am behind with his schooling fees. If you get this letter before they find me I would like a decent burial.

We owe at least 15 weeks rent- but here again we have a wonderful woman for a landlady. If it had not been for her we should have been destitute weeks back.  My Daughter Betty is just a sweet angel, and I owe her fees too at school.

I've earned Â£66 since 'Clowns In Clover' and I am doing this really to get out of the way as I have not the money to go abroad or anything. I was going to start a school of singing with the aid of a friend, but I feel it's no go before we open.

So that's that. So long old pal. If I have helped to make things easier for the profession then I am glad, although I believe I have suffered in consequence. God bless you all.'

'When I wanted someone to cheer up the sick, the destitute, or the unfortunate inmates of a prison, I always thought of Jack Cannot, and he never refused me'. Charles Dunn, secretary of the Actors' Federation.

According to the Sydney Daily Telegraph, Jack Cannot remained outwardly happy until the last. They reported that Men who met him within hours of his disappearance on the Wednesday observed no change in his usual care-free demeanour, although many wondered how he could remain cheerful with performances so few and far between. When he went to Maroubra with his mind made up (to end his life) he wrote a last letter to his wife bidding her and his children goodbye. He reiterated his love for them and explained where his body would be found. As soon as Mrs. Cannot received the letter she informed the police, and constables Lund and Wearing, went to the spot and discovered the body.

We have also been helped by the National Library of Australia Australian Newspaper Archive which has provided us with further information. 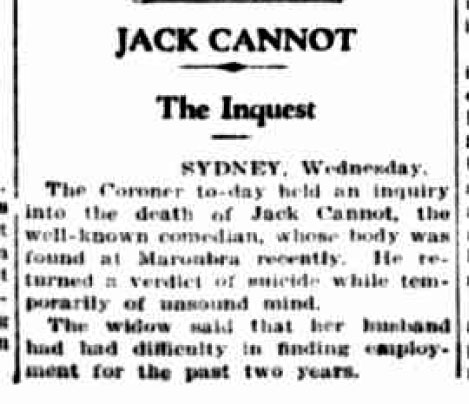 Here at IBY we love a bit of a mystery and using various sources, including the new Stage Archive, we have managed to piece together the following information on Jack Cannot.

Jack Cannot was British,, but had French ancestry. He arrived in Australia as an actor appearing for J.C. Williamson Limited following a number of appearances in England.

In 1907 he was appearing at The Royal Court in Liverpool in The Blue Moon with Horace Mills and Edward Lewis. This looks like it was a touring production as we have also found a review from Manchester. 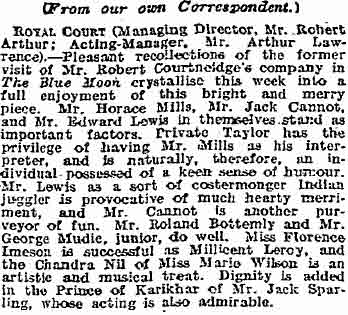 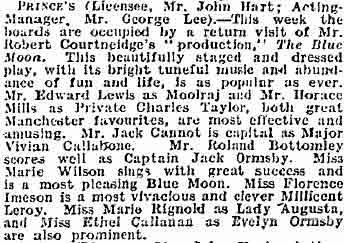 In 1909 he was touring South Africa with the Wheeler-Edwardes London Gaiety company performing for four weeks at the Opera House in Cape Town. 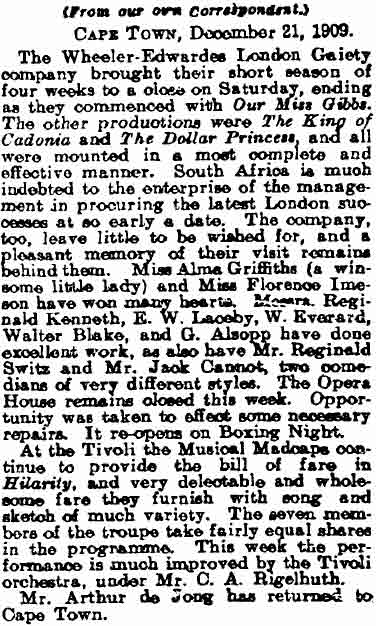 In 1910 he was due to be in South Africa performing The Arcadians but, as this cutting from The Stage testifies it was called off due to his indisposition. 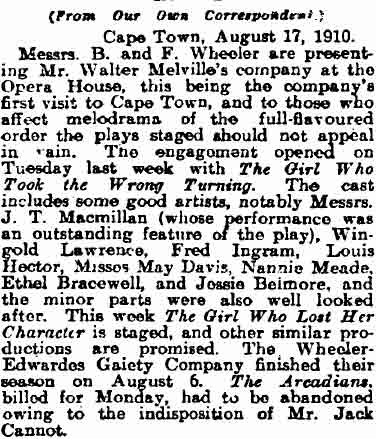 He began his Australian career at Her Majesty's Theatre, Melbourne as the Baron in the pantomime 'Jack And The Beanstalk', which ran from December 1910 to April 1911. Sybil Arundel was the Principal Boy, and Neil Kenyon was the Dame.

Jack Cannot followed this with a successful season in 'The Girl On The Train', and as Popoff in 'The Merry Widow' along with other musical comedies by the Williamson Organisation. He was in the first of the celebrated revues 'Come Over Here', establishing himself as a well known 'Australian' comedian and vocalist.

In 1918 he was appearing in a new version of Dick Whittington for the J.C. Williamson company at Her Majesty's Melbourne. The company included Vera Pearce, Pauline Bindley, Arthur Stigant, Harry Roxbury, William Fullbrook and Ernest Langford, along with Pearl Ladd, and Villiers Arnold. 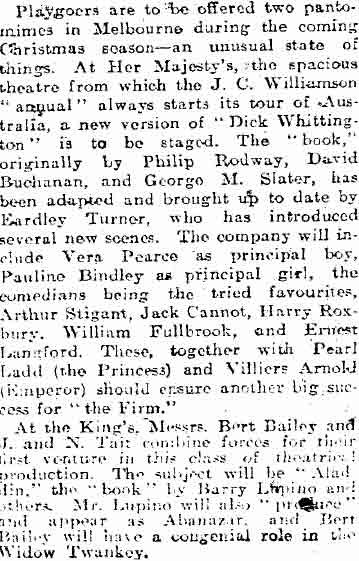 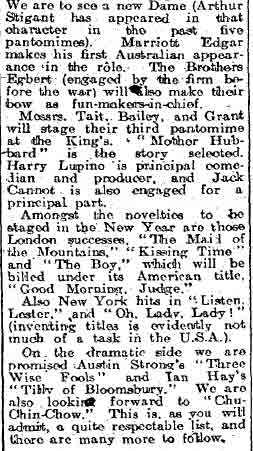 We were contacted by Heather Douglas, who is the granddaughter of Jack Cannot and she gave us the following information about his recording career:-

Jack Valentine Cannot was my grandfather. I have in my possession on behalf of the family a scrapbook album of his career with JC Williamsons in Australia and a CD which we have recently had made from Screensound Australia of the 4 recordings put to disk in the 1920s. I believe there was a 5th recording made but I have never seen copy of this. I have the original 78 recordings. I would like to make contact with anyone who may have any information. Heather Douglas vdouglas@pcug.org.au

In 1922 he was reprising his role of Popoff in Merry Widow in a 'stop-gap revival' at Her Majesty's in Melbourne. 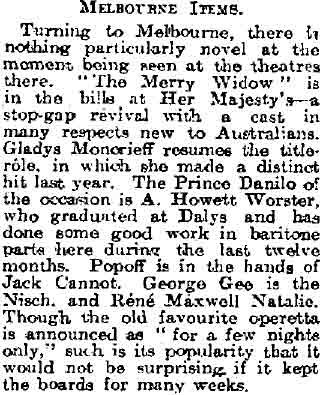 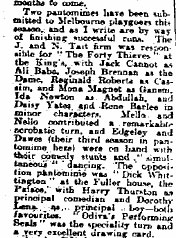 In 1924 the Stage boasts that the J.C. Williamson company is busy preparing for its first pantomime at the Hippodrome in Sydney. The Forty Thieves featured Jack and Bert Harrow as principal comedians and also Githa Calvert as Ganem.

This is all the information its-behind-you.com has on the sad tale of Jack Cannot. If any readers have any further information they can provide, we would of course be extremely grateful.

If you have any further information or pictures of Jack Cannot, we here at IBY would be very interested in hearing from you. info@its-behind-you.com