Jack Stanley - Another Mystery to Solve! 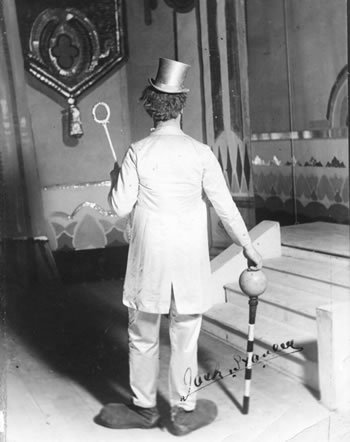 Pictures from a scrapbook

Recently we acquired a collection of pantomime photographs, mostly dating from the mid 1930's to the mid 1950's.The origin of these are unknown, but they may possibly have been part of a scrapbook belonging to a Jack Stanley, pantomime artiste.

After some detective work, and deciphering the pencil notes on the back of these very faded photographs it appears that one set is from 'Cinderella', starring Jack Stanley. His character is unusual in that he seems to play the 'Buttons' type role, but wears what might be his trademark white tail suit, small top hat, and carrying a Belisha Beacon walking stick, and an over-sized monocle.

The photographs seems to suggest this might have been a touring production that covered theatres in Barnstable, Frume, Taunton, possibly Warminster and most certainly Reading. The Theatre in Reading was the Royal County Theatre. We discovered this burnt down in 1937. There is a photograph of a gentleman (possibly Jack Stanley?) amongst the burnt out ruins of this former Matcham Theatre, and in addition a photo of the cast of 'Robinson Crusoe' at the Royal County Theatre, taken in 1936. This must have been the last pantomime before the fire.

The collection also contains photographs of Pantomimes after this date at Reading, and the most likely venue for this must have been either the Vaudeville Theatre, or the Palace Theatre in that town.

The year of this production would seem to be 1934/35. The venues appear to be Barnstaple (possibly the Albert Hall?), Taunton (the Lyceum?) and possibly including Frume (The Palace Theatre, which closed in 1939?) and perhaps Warminster (The Palace?) and Bude. 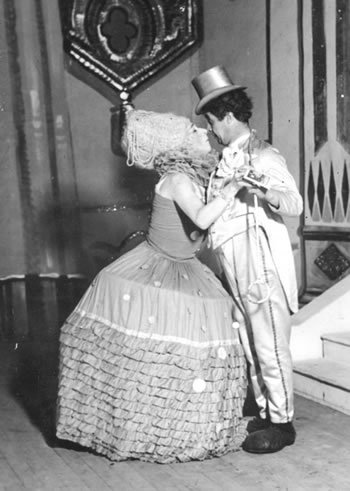 Jack Stanley is the only name we have on these pictures. In some cases it would appear there may have been a few cast changes, and possibly they were taken over a period of a few years. 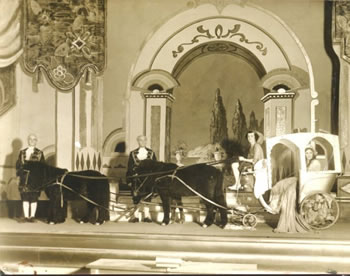 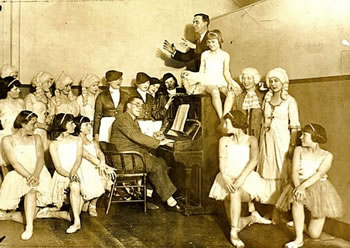 There is another production of 'Cinderella', possibly with Jack Stanley taken in 1942-43, which has an addition of two accordionists in Scots dress, presumably a speciality act. 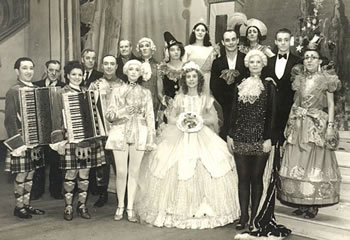 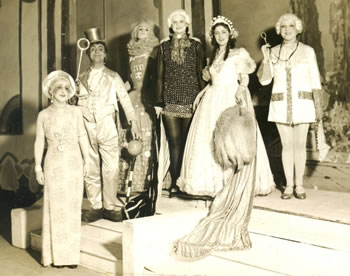 There is a charming 'Rehearsal' photograph of the cast in this collection- heavily 'posed' for the local press one would imagine! 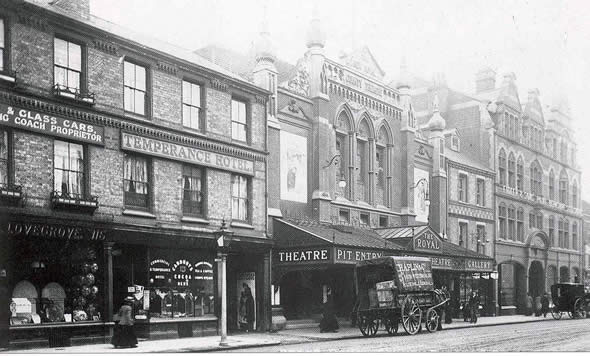 The Royal County Theatre, Reading (Designed by Frank Matcham) - Opened in 1908 but destroyed by fire in 1937.

Here we have a production of 'Robinson Crusoe' taken in 1936 at the Royal County Theatre. It might be possible that Jack Stanley is the actor playing a 'Bosun' or 'Captain' character in this production. 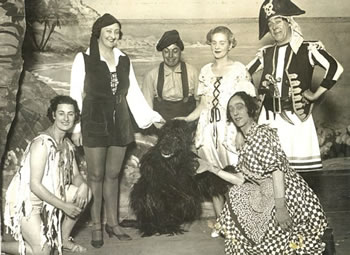 The Fire of 1937: It would appear that this is taken inside the burnt out auditorium of the Royal County Theatre. The man looking up towards the area where the stage would have been could be Jack Stanley again, but this is not certain. 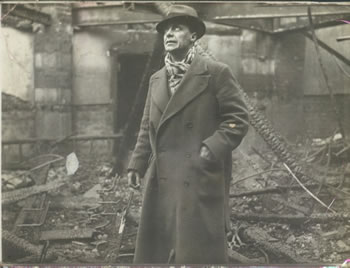 Another Ebay purchase - this time Cinderella from the Palace Theatre Reading - date unknown but 1940's. Featuring Reading's Favourite Comedian - Jack Stanley. Also interesting to note that whilst it opened on the 26th December, it ran until further notice! 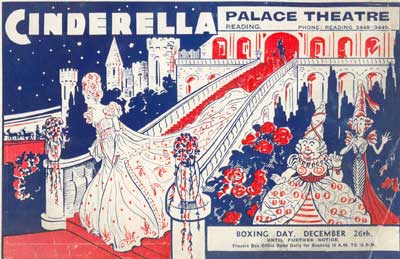 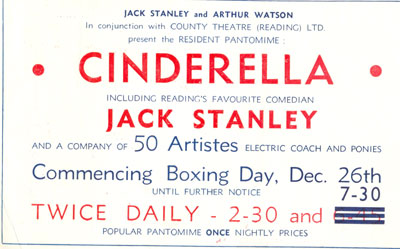 'Babes In The Wood' at the Palace Theatre, Reading is marked 1944-45 and starred Jimmy Ramsay as Dame and Joy Holman as Robin Hood. This photograph was in a very poor condition, and attempts have been made to restore it. The two 'Robbers' are seen on the left, dressed up as the 'Babes'. One has a pee-shooter in his mouth. We have recently purchased a copy of the Playbill for this pantomime from Ebay which shows that Jack Stanley was in partnership with 'Watson' as producer. 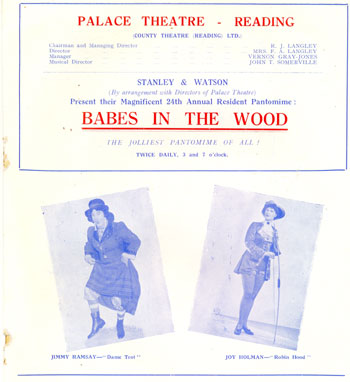 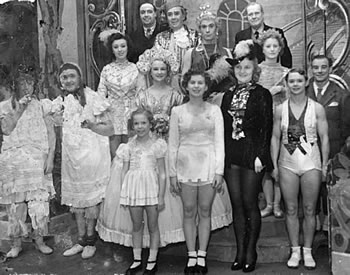 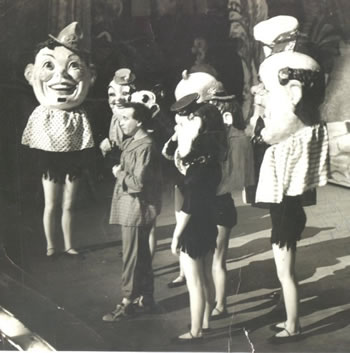 'Aladdin' at Reading- marked 1950 also features a scene with Widow Twankey in the Laundry scene. There is also a finale photograph of the cast. The Policemen are played by women, and the male cast seem to be of advanced age in many cases, possibly a reflection of the lack of younger actors available during and directly after World War Two? 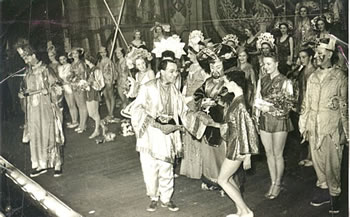 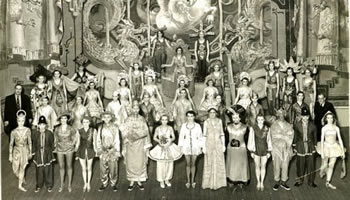 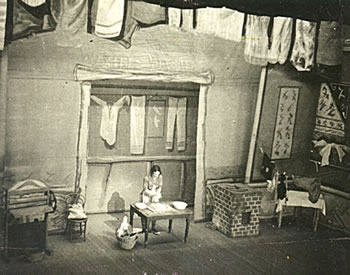 'Jack & The Beanstalk'. This photograph is labelled 'Barrie Baldrick's Grand Pantomime'. It is interesting to see that the actor playing the cow has removed his head for the curtain call. 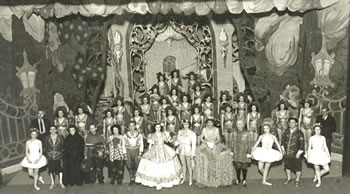 'Goody Two Shoes': This is the only photograph with names written on the back. Dated 1957. The names are as follows: In many cases they were illegible but we are grateful to Judith Roos and Carol English for providing us with some additional information. Judith and Carol's father is Jay Martel - who is in the picture in the back row in a white costume next to the tall Dame.  Jay Martel was a Comic and Panto Dame. 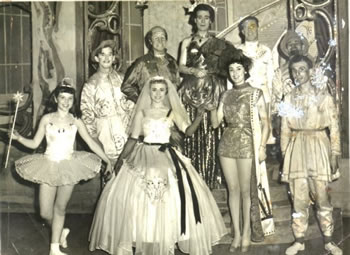 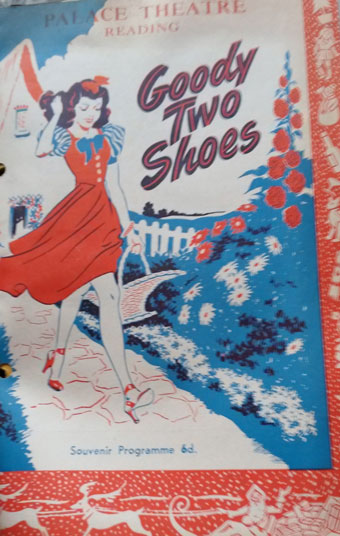 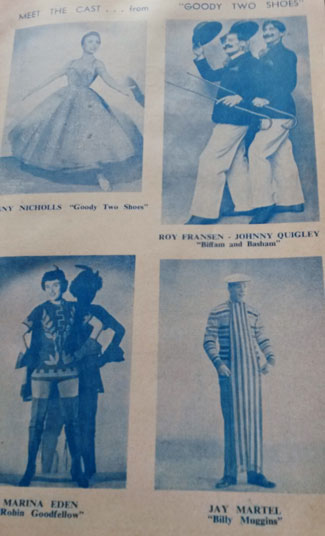 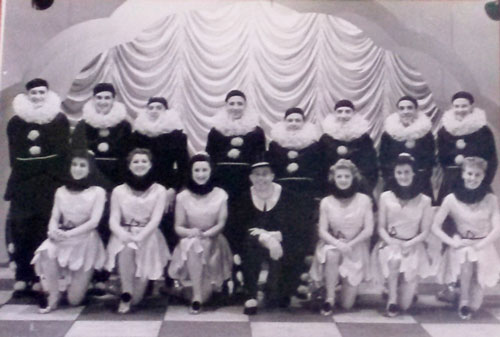 They also provided us with a picture of their father at the Rhyl Amphitheatre in 1955.

Finally there is a portrait of an artiste called Irene Leslie. It is marked 'Savoy Studios, Bradford' and has 'Dick Whittington' crossed out on the back, and 'Hot Punch Revue' stamped in red ink below. The Hot Punch Revue was a show that also starred Betty Jumel and Bunny Doyle. 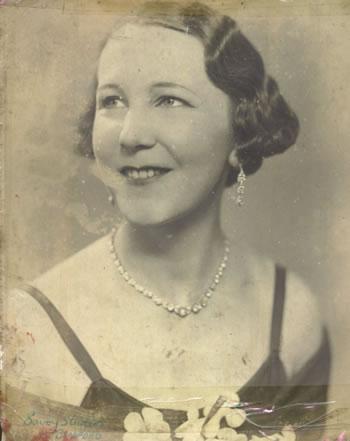 We have received some additional information from Keith Salberg, he recalls that Jack Stanley was at one time in partnership with Barrie Baldrick, producing shows and pantomimes- in particular touring revues which played the Woolwich Theatre. He thinks that the touring pantomime circuit mentioned in this article was most likely Barrie Baldrick & Reg Lever. Reg Lever also produced touring shows with Bobby Ash, formerly a floor manager at Granada Studios, Manchester. Lever & Ash produced some of the Frome pantomimes.

And finally the Hal Bryan mentioned was a Musical Comedy artiste who had toured in 'The Quaker Girl' for Emile Littler.

The following poster was supplied by Richard Norman:-

Barrie Baldrick is a name which has obviously come up with regards to the research we've done on Jack Stanley. We have been contacted by Stefano Biosa who has provided us with a picture of 'Barrie Baldrick's Baby Syncopaters' from the 1920's - it is not clear whether Barrie Baldrick is in the group or just formed it as a producer, but as he was to venture out into producing pantomimes in the 1930's it could probably be assumed that he formed it rather than performed in it. We are very grateful to Stefano Biosa for this item to add to our Jack Stanley collection 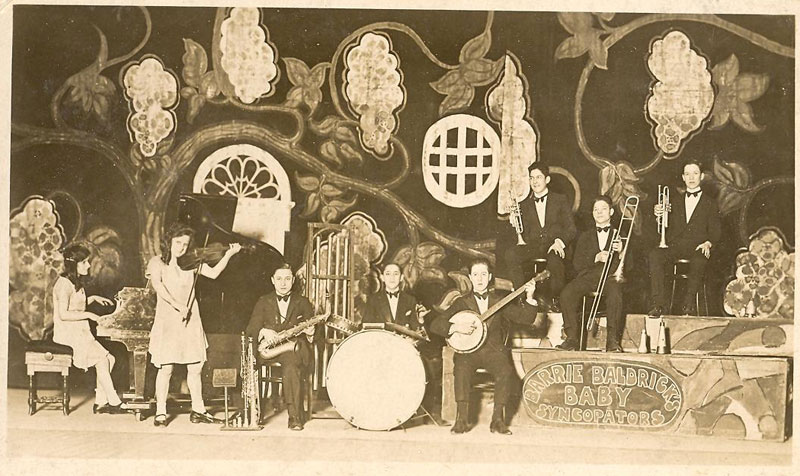 If anyone can shed any light on these photographs, or has any information on Jack Stanley, Barrie Baldrick's' Grand Pantomimes', or Irene Leslie, we would be delighted to hear from you. Please e-mail us at info@its-behind-you.com