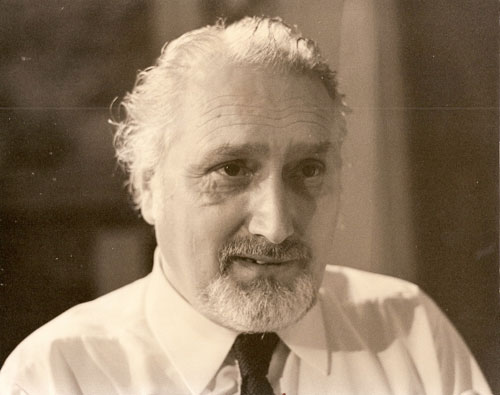 It is with deep sadness we report the death of John Chilvers at the age of 88 – following a short illness.  John served in the RAF  until 1947, and spent much of his time in the Services staging service revues.  After demob he started acting and directing in reps  and touring all over the country.  In 1956 he played the Swansea Empire in a show called “Call Girl” and paid a visit to the “opposition” at the Swansea Grand.  His chance meeting with the theatre’s owner led to a six week engagement, starting in February 1957, to direct a short rep season.

Those six weeks were to stretch into twenty-five years, during which time he became Swansea’s “Mr Theatre” and – without any doubt – was personally responsible for saving Swansea’s Grand from inevitable demolition.

During his 25 years he directed 504 plays, 20 pantomimes, 8 summer seasons with top variety names and a series of Gang Shows for the Scout Movement.  He served on the Drama Panel of the Welsh Arts Council and was honoured with an MBE in 1973 for his services to the theatre in Wales.

In 1982, after the pantomime season, he retired from the Grand due to some heart problems, but he continued working in a freelance capacity for several more years.

He was an extremely kind, witty and gentle man, superbly talented in many fields – especially pantomime and farce, and always supportive of young actors at the beginnings of their career.  There are literally hundreds of actors who owe their first break to “JC” and his passing will cause much sadness and many happy memories.

Our deepest sympathy to his life-long partner, Freddie Lees.

As a child, growing up in Swansea the local pantomime was always at “The Grand”. The Grand Theatre in Singleton Street was my local theatre, in fact, it was the only theatre in Swansea- I was too young to remember “The Empire”-it closed when I was four years old, although my Mother told me that she had helped chaperone the pantomime juveniles there for Rae Copp.

The reason I went into “The Business”, like so many actors in Swansea, was because of “The Grand”, and the influence of John Chilvers.

Like many other aspiring actors and working actors it was his influence that gave us inspiration. In the Twenty-Five years that J.C ran the theatre from 1957 until his early retirement in 1982  John employed nearly 900 people, and presented weekly repertory at first, and then in the mid 1970’s fortnightly “rep”, in addition to annual pantomimes produced “in house”,  which, like the rep seasons were , with a few exceptions, directed by John himself, in addition to the day to day management of this 1,100 seater theatre.

John was born on February 3rd, 1920 in Norwich. His family moved to Oxfordshire, and then Berkshire, and eventually to Chippenham in Wiltshire.

His stage debut was at Derry Hill school near Chippenham, playing Prince Charming. At the age of 19 John had moved to London, working as a book keeper by day, and working at night with the Unity Theatre.

Soon after the outbreak of the Second World War John Chilvers was in the R.A.F. Sergeant John Chilvers was posted to India. During this time he became experienced in producing revues, and had even played in these shows himself alongside artistes such as George Formby.

I can remember John telling me that when he worked with George and Beryl Formby, Beryl was extremely careful in doling out pocket money to George, but appeared to employ someone whose job, as far as John could see, was to follow Beryl around and ensure her coat was hung up!

Returning to this country, John’s first job was in a rep company at Amersham, followed by seasons at High Wycombe, Halifax, Westcliffe, Ashton-Under-Lyme, Blackpool and Colwyn Bay. Colwyn Bay was a particular favourite, and he played several seasons there.

A lifetime later- in the mid 1970’s I was playing in Summer Season in North Wales, and JC was on holiday in Colwyn Bay. He visited the shows (we did about six different ones) and insisted that we met up each afternoon, whereupon he would take me for afternoon tea. He also realised my salary could be bettered, and had a “quiet word”, and “Hey Presto!” I received a small but very welcomed increase!- I digress- back to the 1950’s…

John was by now working in repertory and on the touring circuit, playing in revues and in plays. One play was named “Call Girl”- it toured in 1955 and again in 1956. During Holy Week it played at the Swansea Empire. This was John’s first visit to Swansea. The Good Friday was not deemed a suitable day to perform a play with this particular title, so the company were given the night off, and a group of them, including John and Freddie Lees went along to see the opposition at the Grand.

The Play was called “The Widow’s Mite”- much more suitable for a Good Friday in Swansea! It was John’s first visit to the theatre he would become synonymous with. At that time the theatre had only recently re-opened, having been a cinema since the early Thirties. It was shabby, and struggling. In the following year the Empire Theatre was to close, and by 1957 “The Grand” was the sole supplier of professional theatre to Swansea and the surrounding areas.In the year immediately before John took over, no fewer than three Repertory Companies tried to make a go of it, and failed.

The Theatre was owned by the Willis Family. John got into conversation with the proprietor, and obviously impressed him with his enthusiasm. When the following Pantomime ended at the Grand he remembered John Chilvers, and asked him to direct a six week rep season, starting on February 4th 1957.

The season opened with Ivor Novello’s “We Proudly Present”, and the audiences were not bad, better than the previous season. When the six play run ended on March 16th Mr. Willis suggested that John mike like to stay on as Manager of the next few weeks’ programme, and resume the rep season on May 27th.

Growing up in Swansea, I was growing up around The Grand. By 1965 my brother Vivyan was working at the theatre as Assistant Manager (Later Theatre Manager, when the Council took over the building, and John became Administrator).

After school, and during the holidays I was often allowed to be around the theatre, the front of house, or backstage- helping out if asked, and generally becoming in thrall of this wonderful place. John was a man of routine- one ritual I always remember was sending someone out- sometimes it was me, to the local cake shop in the afternoon, and sitting in the box office handing sticky buns around to the ladies who worked there. John’s dog, “Tom” would be asleep in his office (tucked away behind the ice cream room) and, in between Tom and John’s desk would inevitably be a stack of flyers and hanging cards- if I was lucky I would get to distribute a few, giving out comps- and cartons of  sweets, as the kiosk wasn’t big enough to take all the stock.

The highlights of after school, and later, after college were watching the plays in the rep seasons, and of course the pantomimes that JC produced. Trips backstage to deliver something to wardrobe (then a series of small houses behind the theatre) or pass a message would last a very long time, as I was able to tuck myself away and watch rehearsals from the wings.

John always held his panto rehearsals in the Circle Bar. I’m sure I remember incorrectly, but at the time it seemed as if everyone kept their coats (and hats) on, and manoeuvred their way between the bar stools suggesting “bits of business” while Cherry Willoughby rehearsed her dancers in the foyer, or if space, on the stage. The theatre came alive during these afternoons, with panto folk rehearsing in every available corner. John held it all together, and presented the patrons with exactly what they wanted.

We had local names and we had big name stars from television, a huge chorus of dancers, often singers employed as well, then a cast of principals, with the costumes and scenery usually on hire from ex West End and major provincial pantomimes.

It’s little wonder that I’ve ended up in pantomime myself I suppose. Watching John create the magic of pantomime year after year, and getting to know the actors- often returning year after year- my fate was sealed the moment I went backstage. JC influenced and inspired a great many young actors, and, just as importantly, employed them for long pantomimes and even longer repertory seasons throughout the year.

I grew up watching Jess Conrad as “Colin” in “Puss In Boots”, Marty Wilde as “Robin Hood”, Grand and Mars as the Ugly Sisters in “Cinderella”, Reg (“Confidentially”) Dixon as Dame, Emerson and Jayne performing their amazing “Flying Carpet” speciality, “Dumart & Denzer's Skeltons Alive!” (John was an expert at employing superb ”spesh” acts) and later, after leaving Swansea I would return each year to see  the likes of Paul & Barry Harmon (later known as “The Chuckle Brothers”), Peter and Sue Barbour on stilts, Burdon & Moran as “Sisters”, Barry Hopkins as “Boy”, Sian Hopkins as “Girl”, Stan Stennet, Johnny Tudor-and of course Freddie Lees as Dame Trott. Freddie appeared frequently in the rep seasons, as well as being Swansea’s all time favourite Pantomime Dame. There are so many names in John’s pantomime legacy.

John was awarded the MBE for services to Theatre In Wales in 1973.

For a selection of some of John Chilvers’s pantomimes, see “Swansea Scrapbook” in our articles section.

I think it was my cousin, Anthony Lyn who summed it all up- when I contacted him in America to tell him of John’s passing, he had in fact that day been speaking to Ian Parsons. Ian is preparing a book on the history of Swansea Theatre, in particular the Grand.Anthony’s reaction was this: He said

'When I was speaking to Ian about the Grand, I didn’t realise that the man who WAS the Grand had passed away'

The following are extracts from the 1988 Stockport Davenport Theatre production of Mother Goose which JC directed. We are very grateful to Andrew Ryan for supplying these items. 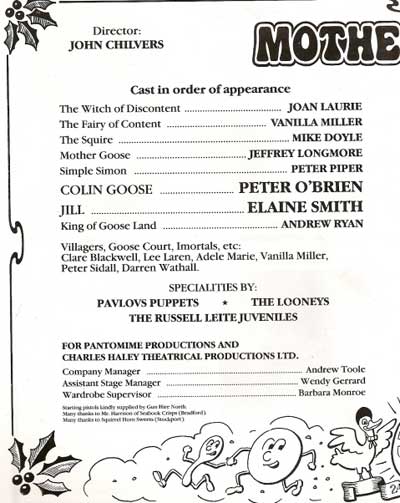 The Stage Obituary by Vivyan Ellacott 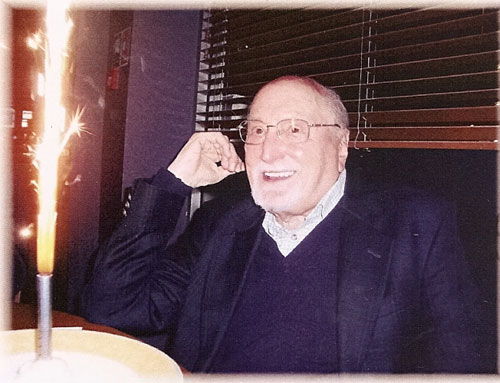 The funeral took place on the 25th March at 2.45pm. The venue was the West Norwood Crematorium. The following people were in attendance.

Taking part in the service: 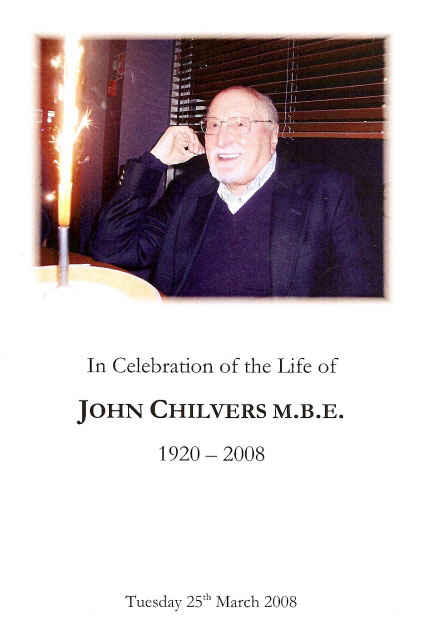 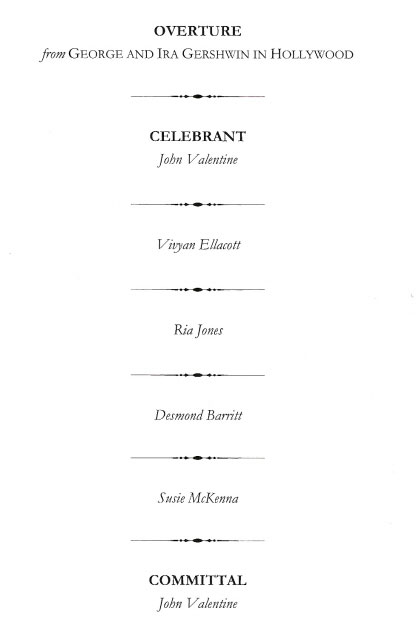