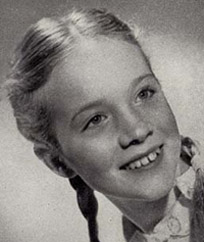 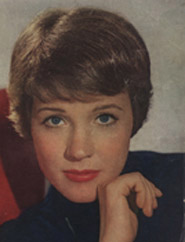 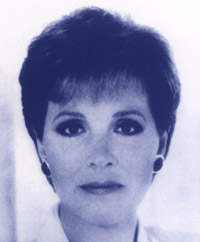 Julie Andrews, star of “The Sound of Music”, “Mary Poppins” and “Victor Victoria”, was born "Julia Wells" on Oct 1st 1935. Her mother and step-father, Barbara & Ted Andrews, were Variety artistes, and Julie’s extraordinary vocal talents were incorporated into the act from an early age. Her first big break was in the 1947 London revue “Starlight Roof”, the twelve-year-old stopping the show twice-nightly for a full year. She was invited to appear in the Royal Variety performance in November of 1948, a mark of the success and fame which she had earned, despite her years.

Julie Andrews appeared in five pantos, starting at the top, playing the title role in “Humpty Dumpty” at the Casino in London when it opened on December 21st. Producer Emile Littler’s series of Christmas entertainments were justly renowned, and for the 1948-9 season he proudly advertised “the largest star cast ever in London pantomime”. But Julie was far from the star, as can be judged by the relative sizes of the names on the poster. Who could have guessed that the thirteen-year-old egg would become everybody’s favourite film nanny a few years hence ? Vic Oliver and Pat Kirkwood, Andrews’ co-stars in “Starlight Roof” joined her in “Humpty Dumpty”, and Richard “Mr Pastry” Hearne shared top billing. The panto ran for 119 performances, closing on 5th March 1949.

For the next few years Julie toured the country, sometimes with Ted & Barbara, sometimes with a governess, beginning a gruelling schedule of twice-nightly Variety. When the 1950-51 panto season came around, she was not quite the novelty she had been in 1948-9, but did land the title role in a Nottingham pantomime, playing "Red Riding Hood" at the Theatre Royal. The show opened on 23rd Dec, running until 10th March 1951 and starred the great British comedian Tony Hancock.

Back to the London Casino, for another Emile Littler panto, this time playing Princess Balroulbadour in "Aladdin", opposite Jean Carson in the title role. The show opened on 19th December, and ran for 103 performances, closing on 23rd Feb 1952.

Public interest in panto tends to drop off rapidly after New Year, but Aladdin producer Emile Littler pulled a masterstroke on 2nd February, putting Julie on the cover of a booklet of "Julie Andrews' Nursery Rhymes" which was given free to readers of Woman's Companion magazine. Although it does not mention Aladdin, we can be pretty sure that the magazine itself informed Mothers that Julie could be seen on stage for another month !

Another year, another panto ! Opening on 23rd Dec 1952, the Coventry Hippodrome pantomime, "Jack and the Beanstalk", featured Julie as Princess Bettina. Julie Andrews co-starred with comedian Norman Wisdom and Eddie Henderson (as Dame). From her wages Julie bought her first car, a 1948 Hillman Minx, which she called "Bettina" !

The Coventry panto had been well received, and following a year in which she tried her hand at Revue, Julie was invited to the London Palladium to play the title role in "Cinderella”. The script was written by a young team, including the then virtually unknown Spike Milligan and Eric Sykes. Described as being one of the first of the “new” post-war pantos, it opened on 24th December and ran for 122 performances, closing on 6th March 1954.

Julie was joined by her old friend Richard Hearne, the future “Dr. Who” Jon Pertwee, and a young comic, Max Bygraves !

To read some reviews of "Cinderella", including rare images of Julie Andrews on stage in the show, click the button on the left

“Cinderella” was the springboard for Julie’s career. Sandy Wilson’s musical “The Boyfriend” was being considered for a transfer from the West End to America, and while producers Feuer and Martin were in London they saw the Palladium panto and found their star !  Julie had one more British commitment, the flop musical, “Mountain Fire”, but moved to New York shortly afterwards to star on Broadway. “My Fair Lady” followed, then a film career starting with “Mary Poppins” in 1964, and the rest is, as they say, history.

Simon Moss is a dealer in theatre memorabilia, based in the UK. His website, www.c20th.com, includes a full review of Julie Andrews’ stage career, with many items of ephemera for sale.