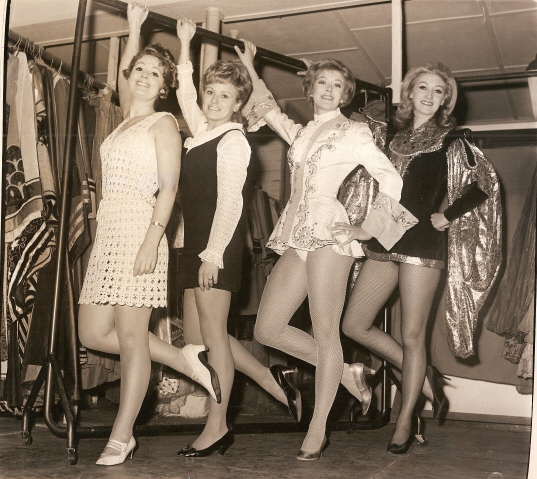 Forty years ago these fabulous Principal Boys had their photographs taken for the press by Barratt’s Press photographers of Fleet Street. The photograph was taken on the 4th December 1969 and features four leading ladies who were Principal Girls and Principal Boys in four major pantomimes of that year.

In 1969 PAULA HENDRIX was about to appear in “Robinson Crusoe” at the Coventry Theatre as Polly Perkins. The pantomime starred Ken Dodd and opened on Christmas Eve that year.

Paula had understudied Maria in the original stage production of “The Sound Of Music”, which also starred Olive Gilbert as Mother Superior, and  was the leading lady in the Drury Lane production “The Boys of Syracuse” in 1963, duetting with Bob Monkhouse. They had the hit number “This Can’t Be Love” and “You Have Cast Your Shadow On The Sea”. The show also starred Dennis Quilley, Maggie Fitzgibbon, Ronnie Corbett, Sonny Farrar and Pat Turner.

Paula was to work again with Ronnie Corbett in the 1966 pantomime “Cinderella” at the Alhambra Glasgow. The show starred Stanley Baxter and Ronnie Corbett as “Sisters” along with Lonnie Donegan., and appeared in major musicals and pantomimes.

In recent times Toni has become a familiar face from her appearances as receptionist Claire in BBC’s “Casualty”, and has appeared in Television productions that include “The Ties That Bind”, “Silent Night”, “The Knock” and in Eastenders.

Toni had made West End appearances in “The Student Prince” and “Bitter Sweet”, as well as appearing opposite and duetting with Howard Keel in the Musical “Ambassador”, in 1971,which also starred Danielle Darrieux, Margaret Courtney, Amelia Newsome, Judith Paris and Blain Fairman. It was choreographed by Gillian Lynne. She was a regular performers at the Players Theatre London and the City Varieties Leeds in Music Hall.

Recently Toni-Sue has appeared as Fairy , and as Fairy Godmother, often for UK Productions, and appeared at Sheffield Lyceum in “Dick Whittington” and “Jack And The Beanstalk” at the Grand Theatre Blackpool amongst other panto appearances.

JOYANNE DELANCY was appearing in Oxford at the New Theatre as Prince Charming inj Cinderella. The stars of the show were Roy Castle, Nicholas Parsons and Basil Brush.

Joyanne had previously appeared at Delfont’s “Talk Of The Town” nightclub, in what is now the Hippodrome, Leicester Square. She appeared in the 1966-67 season entitled “Dangerous Curves” alongside Peter Elliott, Pearl Ho, Penny France, Julie Cavell and Sonia Bendi. She was to return seven years later to appear in “A Touch Of Venus” at the venue with Peter Gee, Connie Reid, Dick Jordan, Pepsi and Elisabeth Elliott.

In 1967 she appeared in the London premier of “Sweet Charity” which starred Juliet Prowse and Josephine Blake, and in the same year appeared as a dancer in Tommy Steele’s film “Half A Sixpence” which co starred Julia Foster. She was in the film alongside dancers Paddy McIntyre, Lesley Judd, Bob Howe, Tom Merrifield and Rod McLennan. Featured were Fred Evans and Roger Finch, and uncredited was the voice of Marti Webb. Joyanne continued in Musicals and revues in the West End and around the country.

YVONNE MARSH, one of the country’s leading Principal Boys- often billed as “Britain’s Favourite Principal Boy”  was appearing that year as Aladdin at the Hippodrome Bristol with Bernard Bresslaw and Freddie Davies, along with the Dallas Boys. Her show also opened on Christmas Eve.

Well known to viewers from BBC’s “You Rang M’Lord”, Yvonne played Madge Cartwright in the series alongside Jeffrey Holland, Su Pollard, Paul Shane and the company.

In 1969 when this photograph was taken Yvonne was already a veteran of Stage Screen and Pantomime- having started in films as a child, and appeared in  the title role of “Goody Two Shoes” for Emile Littler at the Casino Theatre London  in 1950 playing opposite Arthur Askey and Charlie Cairoli.

Yvonne, the sister of actress Jean Marsh of “Upstairs Downstairs” fame, began in British films such as “The Little Ballerina” in 1947 with Marian Chapman and Doreen Richards. Her film career included appearing in the 1953 Bio-Pic on the life of Gilbert & Sullivan, and in “Come Dance With Me” in 1956 opposite Max Wall, Barbara Hamilton  and Anne Shelton. She made a small appearance in the original film “Casino Royale” in 1967.

In 1964 Yvonne had been leading lady in “Round About Piccadilly” with Max Bygraves at London’s Prince Of Wales Theatre. Other musicals included “The Water Babies” at the Royalty Theatre London and numerous television and theatre appearances in variety.

Yvonne appeared in major pantomimes, often for the Delfont organisation, and among her many seasons were Bristol Hippodrome “Aladdin” with Rod Hull & Emu, Birmingham in “Jack & The Beanstalk” with the Batchelors and Frank Carson, The Empire Liverpool with Norman Wisdom and Birmingham Hippodrome with Roy Hudd and Charlie Williams in “Robinson Crusoe”

Yvonne is a stalwart member of the Grand Order Of Lady Ratlings.