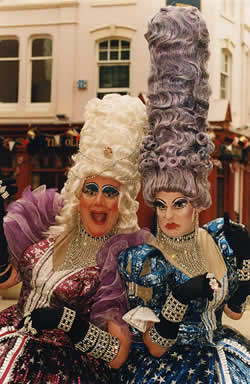 Nigel Ellacott and Peter Robbins made their first appearance together as the Ugly Sisters in the 1981 production of “Cinderella” at the Kenneth More Theatre, Ilford. They decided to establish themselves as pantomime specialists, and began to build up an extensive wardrobe of costumes, wigs and properties. Nigel has written over twenty six pantomime scripts, which have been performed throughout the country, and three performed in the United States.

In 1983 Nigel and Peter began their association with Paul Elliott’s “E&B Productions”, playing the Ugly Sisters at the Gordon Craig Theatre, Stevenage, followed in 1984 with “Cinderella” at The Beck Theatre, Hayes with Dennis Waterman and Rula Lenska. The next year they appeared at the Pavilion Theatre, Bournemouth with Rolf Harris, Bill Owen and Kathy Staff. Since then they have appeared with Rolf a further four times, with Rolf taking over the role of Baron Hardup. They have enjoyed a Royal Gala performance at the Richmond Theatre, and have appeared in virtually every major theatre in the United Kingdom.

Nigel and Peter have appeared in pantomime all over the country, including the Birmingham Hippodrome, Lyceum Sheffield, Wimbledon Theatre, Theatre Royal, Nottingham and for Qdos at The Darlington Civic Theatre and His Majesty's Theatre, Aberdeen, The Mayflower Southampton, Opera House, Manchester, Theatre Royal, Newcastle and the Theatre Royal, Plymouth.

Peter and Nigel were delighted to be invited to take part in the re-opening of the Hippodrome Theatre, Birmingham, in the Silver Gala and at the Birmingham Arts Fest 2001.

They were delighted to take part in the Birmingham Hippodrome’s 100th birthday celebrations, in a gala show featuring some of the stars of the Hippodrome’s illustrious pantomime heritage. They have also taken part in the Birmingham City’s “Arts Fest” playing in the main square to a crowd of 10,000! They have attended this event for the past five years . They were asked to take pride of place in the Manchester Lord Mayor’s parade in 2003, and later that year  they were invited to switch on the festive lights at Covent Garden and the following day in Manchester.

For several years they have returned to the Lyceum Theatre in Sheffield to present the Theatre’s annual open day festival, and have returned to the Theatre Royal, Nottingham to perform their “Introduction to Pantomime” onstage. Nigel and Peter have also presented the open day festivities at the Wimbledon Theatre for two years, The Kenneth More Theatre in Ilford’s Open Days, as well as various Pantomime and charity  events at the Theatre Museum, Covent Garden, the Strand Theatre, and at the Victoria Palace, London.

Nigel and Peter presented “An Introduction to Theatre” for a month in the Greater Manchester area, on behalf of the Coliseum Theatre, Oldham, and similarly for the London boroughs of Lewisham and Redbridge, through the Kenneth More Theatre.

As “The Ugly Sisters” they have hosted many corporate events, for companies such as British Airways as well as charity fund raisers. They were recently at the Brick Lane Music Hall, London appearing with Barbara Windsor, and at the Brick Lane Charity gala, along with Britt Ekland and Danny La Rue. Last year they hosted the Unilever-Faberge Summer Ball in Fulham.. what you might call “Soap Stars”!

On the 15th April 2009, Peter died suddenly and bought to an end almost 30 years of sisterhood. There is a page devoted to memories of Peter. 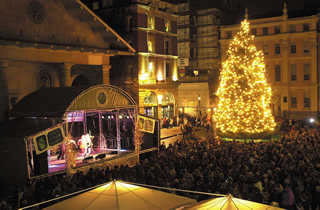 Switching on the festive lights at Covent Garden

Nigel and Peter have appeared as their characters, the Ugly Sisters, for BBC’s “Ready,Steady, Cook” in a Christmas special, causing mayhem in the kitchen with Fern Britton, Richard Cawley and Patrick Anthony. They had appeared with Fern in Southampton a few years back, with Fern as “Dandini”, and surprised her on camera with a photograph of her in “Thigh Slapping” mode!

They performed one of their Pantomime routines, and were featured guests on BBC’s “Lowri Show”  that explored the traditions of Pantomime along with Lionel Blair, Anita Harris and John Altman. Recently they performed as the Sisters in the documentary “Shop Till You Drop” for Carlton Television, and as guests on BBC Radio 4’s “Go4It” children’s programme. They followed this up performing during the interval of Prokofiev’s “Cinderella” on BBC Radio 3 in an expose on the character of Cinderella. 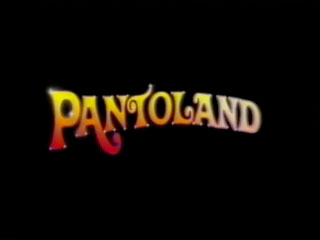 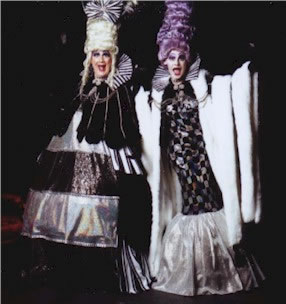 In 1997 Nigel and Peter were featured in Channel 4’s documentary “Pantoland” repeated again in 1999. The programme put the two artistes in the spotlight as they prepared for Pantomime at the Victoria Theatre, Woking, as they involved themselves in the preparation of costumes, the rehearsal period and the first night opening show. The programme also featured Nigel and Peter’s touring production of “The Pantomime Roadshow”, presented by E&B productions, as they took the history and tradition of Pantomime to schools around the country. 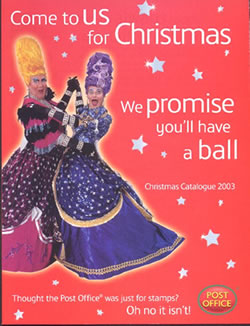 In 2003 Peter and Nigel were asked to be the face of the Royal Mail Post Office’s Christmas Advertising Campaign. Their images as the “Sisters” appeared as life-sized cut-outs, banners, in brochures and posters in every Post Office throughout the country. This was followed up with a series of radio adverts, broadcast nationally, and appearances on  Granada television and radio chat shows through to the New Year. 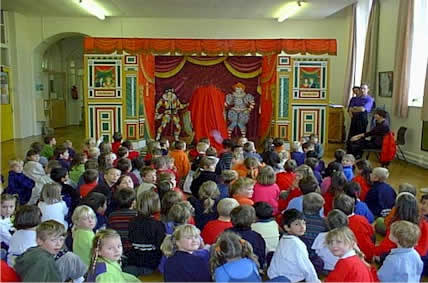 The idea for a touring Pantomime show began in 1996, when E&B productions approached Nigel and Peter with the  concept of taking a show to schools, outlining the traditions of Panto.

In their characters as “The Ugly Sisters”, they tour schools during the autumn term each year. So far the “Roadshow” has played to approximately 50,000 school children, giving ten performances a week. The idea of the show is to provide a humorous insight into the history of Pantomime, along with its traditions, involving comedy sketches, factual information, and a songsheet. The second half is in the style of a workshop, where the children are shown costumes and properties from various productions, get the chance to dress up and join in, and then ask questions of the three actors. 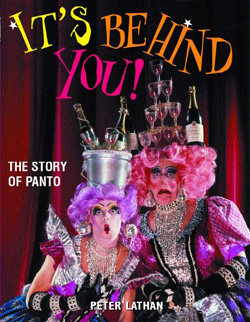 The Sisters were contacted to see if pictures from the site could be used in a new book about Pantomime written by Peter Lathan, they were then thrilled to be asked to be 'Cover Girls' and with the book released their faces will soon be filling the book shelves all over the UK. If you would like to order this book, why not make use of online seller Amazon by clicking on the link below, of course there are other sources which you can use. There is a foreword by late John Inman.

Nigel Ellacott and Peter Robbins appeared as the Ugly Sisters in:

“Nigel Ellacott and Peter Robbins are two reasons why pantomime still flourishes in Britain. With their reach-for-the-skies Marge Simpson wigs, eyelashes like lawn rakes, outrageous ballgowns, and a stage patter perfected over 16 years of playing Cinderella’s ugly sisters, Ellacott and Robbins were the unexpected stars of Channel 4’s Pantoland which ended its four part run last night. They play the same roles, year in and year out. The jokes don’t change either. When they arrive at the fancy dress ball- dressed as a hat and as a high-heeled shoe- Buttons asks what they have come as. “Hat!” says one sister. “Shoe!” snaps the other. “Bless you!” says Buttons!”

“…Nigel Ellacott and Peter Robbins might have been playing the Ugly Sisters for 18 years, but their routines and costumes are anything but tired. Scary and Sporty have a different outfit for every scene. They take care of the problem that there is no really hissable villain of the piece by scaring the pants (they should be so lucky) off every male in the place. And their jokes are spot on…”

“The evening really comes into its own with the expertise and electricity created by the good old pantomime experience of Buttons and the Ugly Sisters. The sisters, Nigel Ellacott and Peter Robbins are rightly hailed as the best Ugly Sisters in the business, and they prove their worth throughout.

The enormous wave of dislike for them- central to pantomime, as there must be at least one villain- comes when they force Cinderella to tear up her invitation to the Prince’s ball.

There was a pause of disbelief from the youngsters, then an outcry of such righteous indignation I realised that, as long as we have performers like this, Pantomime will live forever.”

“…If bravura performance alone equated to ownership of crystal slipper, the Ugly Sisters would walk it.

Played with gusto by Nigel Ellacott and Peter Robbins, these hysterical harpies establish an instant rapport with the audience-and while their material features more pure corn than the Niblets factory, well, that’s what Panto’s all about, isn’t it? After all. there’s no such thing as an old joke when you’re a young child…”

“..Humour by the bucketful, thanks to a wonderful script and outrageous performances by the Ugly sisters.

Nigel Ellacott and Peter Robbins made the most revolting Ugly Sisters imaginable, appearing in a series of common and totally riduculous- but quite appropriate- costumes. Their duet deservedly stopped the show, as did their strip as they retired to bed. Theirs is professionalism at its most exacting”.

“Peter Robbins and Nigel Ellacott are the crème de la crème of pantomime dames – they have made the parts their own in the past 20 odd years – and it is evident that they both enjoy and are very good at tottering about on ridiculously high platform shoes, spitting out risqué one-liners in some of the most lavish and ingenious costumes you will have seen in a long time”

The following images do not enlarge 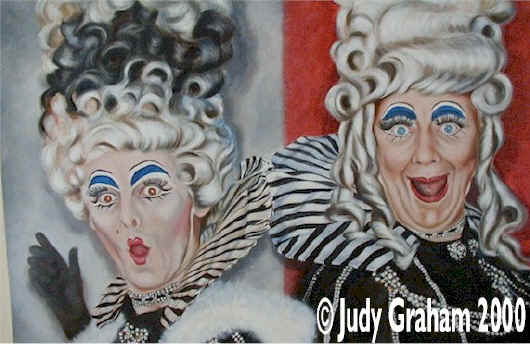 DISCLAIMER - All the pictures/vidoes included we either own or use with the permission of the copyright holder.

If you know any further information about these pictures, we would be grateful of any additional facts which will be added to the site and accredited.

Please email us on info@its-behind-you.com