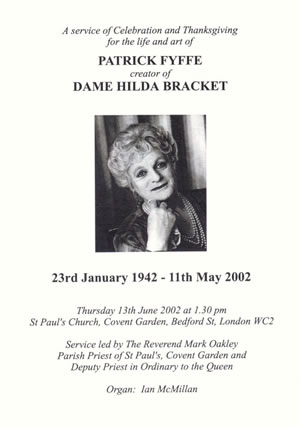 A service of Celebration and Thanksgiving was held today at the Actor’s church, St. Paul’s, in . The order of service has been reproduced here.

Entering St. Paul’s you couldn’t help but think it was the perfect setting for Patrick’s memorial service. Surrounded with stone plaques celebrating Ivor Novello, Evelyn Laye and Noel Coward you really were entering the world of Dame Hilda Bracket, with the organ playing selections from Gilbert and Sullivan as the congregation took their seats.

Ian McMillan played some of Patrick’s favourite melodies on the organ as a packed house took its seats for a celebration. The atmosphere was bright, with people exchanging their stories and memories of Patrick as the church filled up. After the welcome by the Reverend Mark Oakley, Bobby Crush gave a tribute to Patrick, reminding us of how Patrick always gave people new and quirky names when he worked with them- Bobby Crush being renamed “Betty Crunch” by Dame Hilda. He recalled his “Sleeping Beauty” pantomime season with Hinge & Bracket, and his early memories of working with them in variety when they stole the show.

George Logan played a selection of “Hilda’s Greatest Hits” on the piano- a wonderful selection of Gilbert and Sullivan, segueing into “The Night is Young”, Showboat and Keep the Homefires burning by “Dear Ivor”. He talked about Patrick’s love of music, and introduced Marilyn Hill-Smith who, accompanied by Ian McMillan sang “My Hero” from “The Chocolate Soldier”. 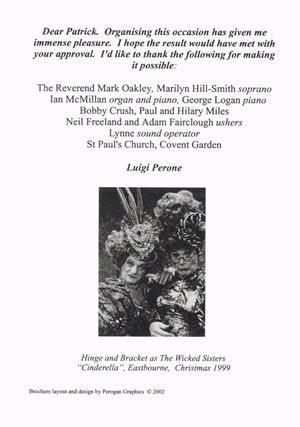 Symphonia to arrive-a duet which reminded us how those two voices blended together seemingly without effort. Finally, led by the voice of Dame Hilda the congregation rose to sing the final chorus of “ and Glory”, the tradition end to an evening with Hinge and Bracket.

Patrick and George’s friends packed the church, and among the many were several from the world of theatre and pantomime, most of whom retired to the Concert Artistes Bar opposite (or Association for Acts and Actor’s, as it is now known) for a drink, and a chance to remember Patrick. Among these were George, his sister Jennifer, Luigi, Bobby Crush, John Inman and Gyles Brandryth joined by Pamela Cundell, Maggie Stables, Sheila Burnette and Carole Todd. I counted at least nine pantomime Dames, including Kenny Gibson, Andrew Ryan, Michael Harrison, Peter John as well as Peter Robbins and myself. Management’s included Phil Dale, Paul Holman and Ian Liston, who along with Helen Watson and Sarah Whitlock fondly remember our time working with Patrick. It was Sarah Whitlock who took over Patrick’s role in Pantomime last year after he was unable, through his illness, to continue rehearsals. As one would expect at any such gathering it did not take long before the business of casting, broadcasting and gathering of “Show Biz” gossip and anecdotes took place, in an atmosphere I am sure Patrick would have loved. People who care about their business enjoying each other’s company- a true celebration for the irreplaceable Patrick Fyffe. 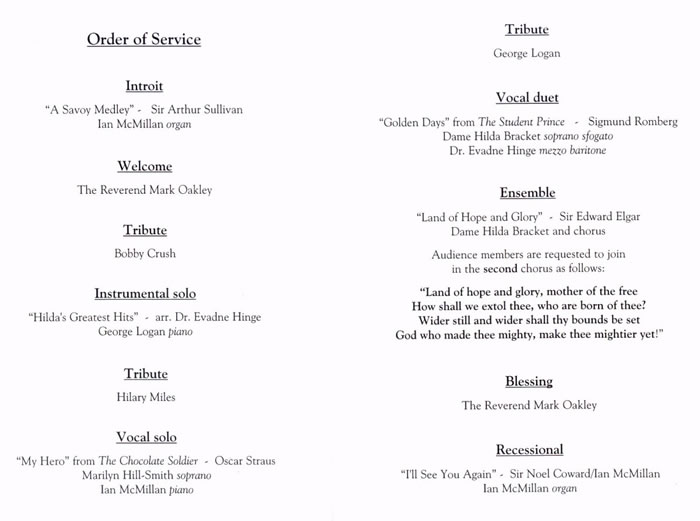 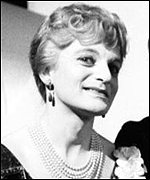 It is with great sadness that we hear the news that Patrick Fyffe, Dame Hilda Bracket has died peacefully at his home, after a long illness. Patrick was unable to perform this past pantomime season with his partner, George Logan, and passed away today. 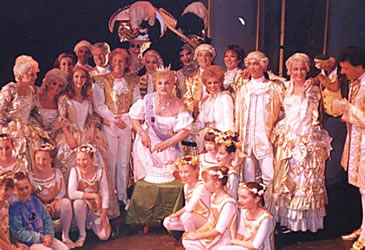 Peter and I had the enormous pleasure of working with Patrick when we were in “Cinderella” together at the Mayflower Theatre, Southampton, and then again the following year at the Cardiff New Theatre, and at the Grand Theatre Leeds. The actress playing Fairy Godmother was unable to play the part, due to an extended tour, and at the very last minute Patrick was asked to play the role of Fairy Godmother. At the time we wondered how this would turn out, as the script was specifically written for the actress in question, Carmen Silvera, but Patrick wrote his entire material, and brought to the role a true gift of comic genius. 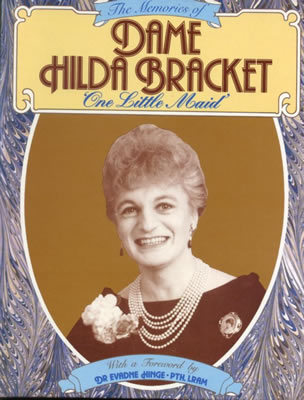 In all the billing matter the role was played by Dame Hilda Bracket, “following in the footsteps of such great names as Dame Anna Neagle and Evelyn Laye…”and the part was truly magical under his expert guidance and timing.  I can honestly say that hardened panto pro’s and stage crew alike used to gather by the tannoys, or slide into the wings each show to watch his kitchen scene- the transformation scene, performed with Fiona Kennedy as Cinderella, and the next year with Cheryl Taylor. It was a piece of theatrical magic in the making. In the second half Patrick as Fairy Godmother sang “The Night Is Young”, a “Boo” Laye classic to Cinderella, and the house (yes, a pantomime house!) was silent, before erupting into applause.

Patrick was a delight to work with- the Ugly Sister’s boudoir became a tea room during intervals and between shows, and Patrick entertained, nay held court during these wonderful sessions- I think we could have sold tickets for the interval had we wished!

To watch George and Patrick in one of their “Hinge and Bracket” evenings was an evening of sheer delight- of all “Double Acts” they were masters of timing, and Divas of delight. Patrick, we will miss you greatly- the theatre will miss you dearly. George Logan, with his wickedly brilliant performances as “Wicked Fairy” and as Dame in pantomimes will be delighting us even more in the future. Thank you Dear Ladies for those wonderful theatrical moments, and bless you Patrick. 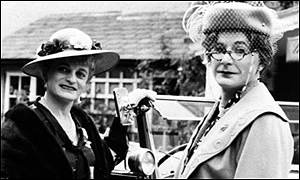 Actor Patrick Fyffe, best known as one half of the singing duo Hinge and Bracket, has died at the age of 60 after a battle against cancer. The stage and TV star, who played Dame Hilda Bracket, passed away on Saturday. The duo launched their drag act at the 1974 Edinburgh Festival to great acclaim and Mr Fyffe continued to tour with his partner George Logan, who played Dr Evadne Hinge. They have appeared on two Royal Variety shows, and performed before royalty on more than 15 occasions. They also hosted their own BBC Two series, Dear Ladies, in 1983 and 1984.

Mr Fyffe's agent and manager, Phil Dale, said: "He had been fighting cancer since Christmas when he suddenly had to cancel his pantomime." Although best known as a duo, Mr Fyffe also made several solo appearances. He appeared as Dame Hilda in The Mikado as the venomous Katisha and played Ruth in The Pirates of Penzance. One of the highlights of the duo's career was appearing on stage at the Royal Opera House in London. They appeared in a New Year's Eve performance of Die Fledermaus, conducted by Placido Domingo, and starring Kiri Te Kanawa as Rosalinde. They toured the UK in recent years in the Peter Shaffer play Lettice And Lovage.