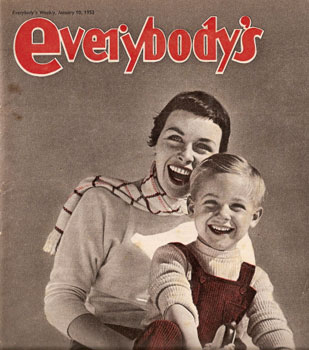 Up and down the country, Dames and Demons, Broker’s men and Principal Boys play their roles in the most characteristic English entertainment: And the majority are subjects of the Littler Theatrical Empire

Most playgoers agree that theatre programmes today are bad value for sixpence.

Not so long ago they were small magazines. There were pictures in them and stories to tell you what was going on in the world of theatre.

Yet there are still stories to be found in todays attenuated programme. Take the story of the man whose name is to be found somewhere near the top of the programme in nearly every big theatre in Great Britain.

You may have missed it. But there it is, above all the star names: “Presented by …..” or “Licensed by the Lord Chamberlain to….” Or “Chairman and lessee….-Prince Littler”.

Never before in the history of the English theatre has a man- a modest and shy one at that- come to the top so swiftly or commands so much power.

If Prince Littler suddenly went berserk, it could be within his legal power to darken the better part of the London and Provincial stages- for at least one night! All of which seems as melodramatic a “success” story as you could expect to find on any stage, for it started in an atmosphere of a Vincent Crummles Company, an old fashioned repertory theatre, two brothers whose ambition it was to produce their own pantomime.

You may have seen “South Pacific” at Drury Lane this year or perhaps “Annie Get Your Gun” at Glasgow or Newcastle? Or “Seagulls over Sorrento” at the Apollo in London or a show at the Coliseum or Her Majesty’s. Perhaps something on the end of the pier at Brighton? 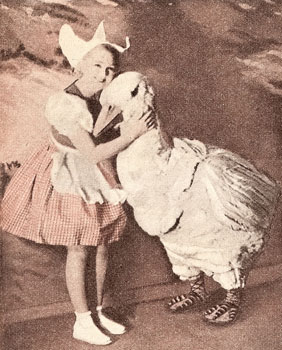 Bert Martell as Goose at the Opera House Leicester.

No matter where the trail starts, more often than not it seems to end at the desk of 51 year old Mr Littler, a pickwickian figure with something of one of the Cheeryble Brothers about him, as a happy farmer on market day- which indeed he is in Sussex.

Here is the story of how it all happened: How Littler, before he was fifty, had so many theatres grouped around him that if taxed today with enumerating them he finds it difficult to supply the correct answer.

The story might be made to start at that desk in his office on the first floor of the London Hippodrome.

There sat in his brand – new theatre, at the turn of the century, Mr. H. E. (later Sir Edward) Moss. The very word “Empire” was popular from the Golden Jubilee in 1887 onwards, and, starting with an Empire Theatre in Edinburgh, Moss had built up an “Empire” provincial chain of music – halls.

There was already a famous Empire in London, along the street in Leicester Square, so when the wonderful new theatre was built, it had to be called the Hippodrome. 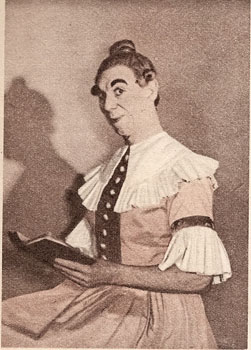 The millions who have visited this famous house of entertainment may not know that when it was first opened in January, 1900, there was a lake in the middle of the stalls which stretched back to embrace part of the stage, and for years aquatic spectacles where a speciality of the house.

Wild animals usually played some part in the show, and even today there are iron-barred cages under the stage.

There must have been a “classical” vogue just then, because nearby there was presently erected the huge Coliseum. Little did Moss, or his associate Mr. (later Sir) Oswald Stoll dream that by their suzerainty would one day be ruled by a “prince”. For Mr. Littler was not yet born 1900.

The Moss Empires and the Stoll group grew and flourished. Aquatic shows at the Hippodrome gave way to the first spectacular reviews staged by Mr. Albert de Courville just before the First World War. The Coliseum specialised in “refined” variety, being a “family” house.

So “family” a house was the Coliseum that until her death about 20 years ago, Sir Oswald Stoll’s elderly mother presided over the box-office in the afternoons, a rather dictatorial old lady with an assistant stationed at her elbow to see she gave the correct change.

Moss had come to London from Edinburgh and Stoll from Liverpool. One day another Edinburgh man was quietly to enter the lists.

His name was Alexander Stewart Cruickshank, and he was a local builder who had contracted to rebuilt a theatre in the city. This insight into the money to be made by provincial theatres led him eventually to become a director of the firm who owned the theatre- Messer’s. Howard and Wyndham.

There were five other fine houses in the chain, including the lovely Theatre Royal in Newcastle and the Opera House in Manchester.

All these big playhouses had to be supplied with new stage shows each week. It was all very well at Christmas-time when Cruickshank could indulge in his passion for Pantomimes, but there was the rest of the year to be considered.

It was due to this need for plays that a friend of Cruickshank’s, a Mr. Harry Tennent, who had been an amateur actor as an undergraduate, founded before the Second World War a production firm bearing his name. So the needs of provincial theatregoers were the cause of an enterprise which today, and for some years past, had produced so many “fine” plays in the West End. Cruickshank, of course, was on the board. 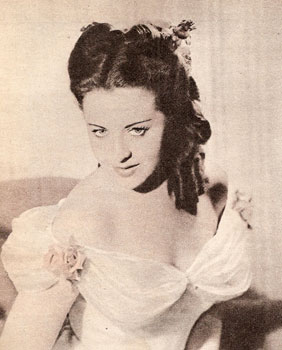 Very quietly, Cruickshank extended his interests, so quietly that a few years ago I asked a leading actor who was appearing in a London Theatre of which Cruickshank was a director, and in the show presented by two companies of which he was also a director, if he had ever met this man from Edinburgh.

He had never heard of him!

Few of the theatre-going public realised that six of their finest West End theatres were really controlled by two almost legendary Broadway brothers called the Shuberts. These theatres were the Apollo, Lyric, St.James, Adelphi, Aldwych and His Majesty’s.

A new figure now entering Theatre land in the person of Sir Harold Wernher, son of the great South African millionaire who enjoyed such favour at King Edward VII’s Court. Presently, Sir Harold bought control of the six houses, although having no theatrical experience. Now what- all this time- of Mr. Littler?

He and his sister Blanche and his brother Emile were born into the old Royal Garrison Theatre at Woolwich, of which their parents were the lessees. They learned every job from selling gallery tickets to manhandling baskets of “Props”, from dealing with rowdy audiences to pacifying artistes who had got their names printed too small on the “billing”.

At the age of 26, Prince produced his first pantomime. (Since then he has produced 113 of them, with six more this Christmas, his brother Emile presenting seven all over the country.)

Soon he turned from Woolwich to becoming a touring manager, and presently bought an interest in first a Cambridge and then in two Leicester Theatres.

Prince Littler’s name first appeared on a west end play bill as producer of another version of his first pantomime-“Jack and the Beanstalk”, at Drury Lane in 1935. yet when war came his reputation was still only that of a provincial theatre manager and producer of pantomimes.

The next ten years were to see a vast change in his fortunes. First, Sir Oswald Stoll died; then the energetic and enterprising Mr. George Black of the Palladium and Moss Empires died; and then, two years ago, Mr. Alexander Cruickshank was killed in an Edinburgh street.

Prince Littler stepped in and took over the Stoll theatres circuit, also the vast Coliseum and Stoll in London, with a couple of Hippodromes in the provinces and a circuit of music-halls around London.

Then Sir Harold Wernher decided to dispose of his theatre interest. There was brisk bidding for control, but it was Prince Littler who eventually took over the six west End playhouses.

Finally Prince Littler assumed the chairmanship of Moss Empires and moved into the Hippodrome. A rather extraordinary situation could have resulted. The executive control of the Moss Empire theatres is held by the energetic Mr. Val Parnell; but Littler- with executive control of the weekly running of the Stoll music-halls – found himself in a position where he might bid against Parnell!

Littler’s first move was to sell some of the Moss Houses unsuitable as theatres to Mr. Arthur Rank for cinemas and buy in some Rank theatre interests. Now the Palladium came wholly into the family circle. There were also the Prince of Wales and the Victoria Palace in the group. Littler found himself involved in a bewildering number of subsidiaries- firms dealing in advertising, catering, bottling and scenery. 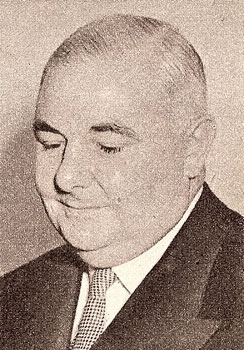 The playgoer might ask whether it is a good thing for so many English theatres to be under the same control. But Prince Littler has his heart and soul in the theatre and loves it for himself, not just for the money to be made out of it.