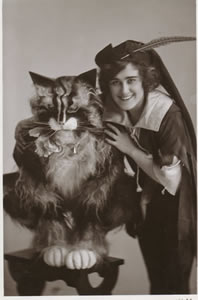 Not as old as the tradition of men playing women, but considerably older than Pantomime, is the tradition of the 'Principal Boy'. The romantic hero of every pantomime story being played by an attractive lady in a short tunic was at its height in the late Victorian era, surviving to today.

Today you will still find girls playing boys, but not as frequently as in the past. Since Norman Wisdom played 'Aladdin' at the London Palladium in 1957, the decline of the Principal Boy began. However, when Cilla Black played the role in 1971, once again the trend was reversed.

The fashion for ladies playing the 'Breeches Parts' as they were known was established in the eighteenth century. Peg Woffington was a popular figure in male roles at the time, and the influence of the 'Breeches Roles' in Opera made the convention a popular one - characters like Cherubino, for 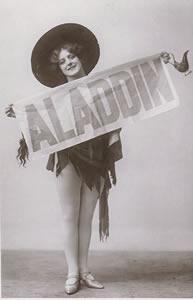 example in 'The Marriage of Figaro'. The first Pantomime principal boy was in 1819, when Eliza Povey played 'Jack' at Drury Lane, but the convention did not take hold fully until the 1880's.

The Victorian and Edwardian audiences were not accustomed to viewing the legs of a pretty actress, especially in an era when even piano legs were cloaked for modesty's sake! However, in a male or 'Breeches' role, the actresses were allowed to display as much leg as they dared, increasing the popularity of the pantomime. Audiences would compare which actress had 'The best legs in the business'. Soon the tunic replaced the breeches, and by the 1930's the tradition was at its height. A 'Boy' in pantomime always meant an actress, one who did not impersonate a man, but who retained her femininity in the role, wore short and flattering costumes, and could draw attention to her legs by giving them the occasional heart slap on each entrance.

The role call of 'Boys' is endless, but from the Edwardian age the names of Florrie Forde, Clarice Mayne and Dorothy Ward remain the most remembered. Later famous Principal Boys include Evelyn Laye, Adele Dixon, Noele Gordon and Pat Kirkwood.