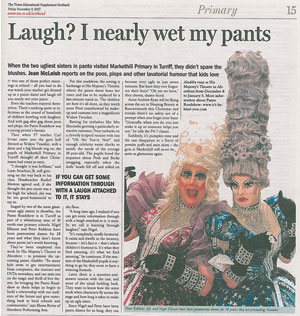 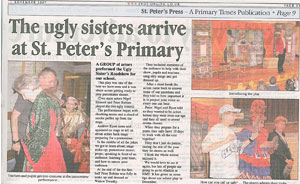 “They shouted and cheered, dressed up in funny clothes and joined in the actions for I Am The Music Man. And that was just the teachers. Happily, the three actors-Nigel Ellacott, Peter Robbins and Lewis Phillips- who took their Introduction to Theatre session to Top O’ The Brow County Primary School captivated the audience as well. A colorful theatre set with miniature stage was erected in the school hall and the actors entertained the children while painlessly imparting facts about theatre in general and pantomime in particular…..this month 40 schools will be visited across Greater Manchester, and the show seen by about 6,500 children.”

“Everyone knows that children are the theatre audience of tomorrow and it is vital that we create an interest in attending live theatre events at an early age. This tour has been used in other areas to foster a relationship between children, schools and venues with a great deal of success.”

“Before a set designed to look like an extra-large Pollock’s toy theatre, Nigel Ellacott and Peter Robbins are introducing Key Stage 2 pupils at Manor Primary School in Wolverhampton to the wonderful world of pantomime…..The show fits neatly into the curriculum, according to the deputy head, Anita Cliff….it brings to life the difference between a script and a performance.

The educational pill is sugared with dreadful jokes (what would you find in Ancient Greece? Ancient chips) that go down well with the children, particularly those about pooh, nose-picking and knickers. Lavatorial humour is peculiarly British, and very pantomime…

Afterwards, children and teachers are invited to model pantomime costumes and Ellacott explains their importance. A lively question and answer session gives the actors a chance to unveil facts about Victorian make-up, how actors get parts and the importance of reading and writing.. ”they had a wonderful time”, confirms Anita Cliff. “we’ll follow this up with a visit to Jack and the Beanstalk”.

…This clever, insightful and entertaining show took the youngsters on a whirlwind tour of everything theatrical. From scenery and lighting to terminology and superstitions, and history it was lapped up by the enthralled audience…it was much like a pantomime. This is unsurprising considering Nigel Ellacott and Peter Robbins are professional pantomime dames….I’m sure this show will have succeeded in its aim of capturing ‘em while they’re young, and it won’t be long before the youngsters are nagging mum and dad to go to the theatre…”

The following comments are taken from the Guestbook of www.its-behind-you.com

These Roadshows have played to over 100,000 children in schools and theatres around the country. The “Magic of Pantomime” Roadshow was also featured in the Channel 4 documentary “Pantoland” in 1999, and both shows have been featured on Radio 4’s “Down Your Way”, and on several regional arts and news television channels across the UK. The following Theatres have booked both versions of the Roadshow: