The Prime Minister of Mirth 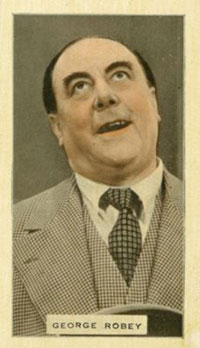 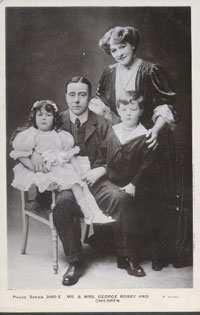 'I was sent to Cambridge till some of my father's speculations went wrong, and I had to face the facts of life and carve out a career for myself.'

These were George Robey's own words in his biography 'Looking Back on Life'.

George Robey was born George Edward Wade on 20 September 1869. Unlike many of his contemporaries on the boards Robey's upbringing was solidly middle-class. His father, also George was a civil engineer whose profession involved much overseas travel, and as a result he first studied at the University of Leipzig where he learned to speak excellent German and get involved in a duel which fortunately did not prove fatal.

On their return to England it was his fathers intention to send him to Cambridge but this was not to be and George found a clerical post with the constructors of the Birmingham tramway. In order to appease his family he took his stage name from a firm of Birmingham builders - at first Roby. He later formally adopted the name Robey by deed poll.

He already had many interests in the Arts, in music and song but once on stage discovered his natural talent for comedy. He was soon earning small fees but his big break came as an assistant to 'Professor' Kennedy, a stage hypnotist.

The 'Professor' was a popular act at the Royal Aquarium which by then had discarded its association with fish. Robey pretended to be hypnotised and sang as one 'under the influence'. He began to attracted attention in his own right and was booked to play the Oxford music hall in June 1891, still only 21

He was soon promoted from 'an extra' to star billing and adopted his own stage persona. In common with his contemporaries the red-nose was de riguer; but Robey added strongly blackened eyebrows and black frock coat and top hat, later discarded for a squashed bowler. Although he could have been mistaken for a funeral director Robey dispensed not grief but laughter 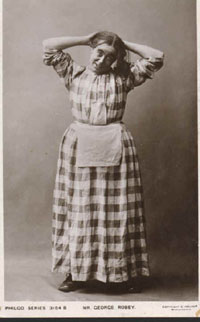 'Kindly temper your hilarity with a modicum of reserve', he begged his audiences; and as the laughter continued urged them to 'Desist !!' 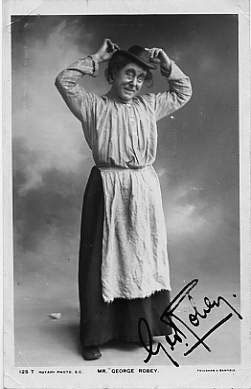 From the moment he appeared on stage he had the audience in his grip, demanding that they stop laughing in a manner still echoed in such comedians as Frankie Howerd and Tony Hancock. Not for nothing was he later billed as the 'Prime Minister of Mirth'.

He had many stage costumes to counter the grimness of the funeral parlour; his pantomime dame was a particular favourite - 'bonnetted and bridling, at once grotesque and genial, creating out of a termagants tantrums a fountain of geniality'.

Like so many others Robey must have seen the threat to his craft with the coming of the cinema but his career branched out into other disciplines and the song with which he will always be associated was never sung on the music hall stage.

During the First World War he entered revue to entertain the troops just returned from the front. The most popular show was 'The Bing Boys Are Here' which he produced with Alfred Lester and the hit of the show was - 'If you were the only girl in the world' - which he sang as a duet with Violet Loraine.

During this time he organised many other entertainments for the war charities and raised over Ł500,000. At the end of the war he was offered a knighthood for these services but he declined it as being too much for a comedian; and accepted the lesser honour of a C.B.E..

As is so often the case, the superb timing of the stage comedian was also suited to classic straight acting. He appeared in light operetta during the early 1930's, having by then forsaken revue

He moved into Shakespeare playing Falstaff in a revival of Henry 1V Part 1 at His Majestys Theatre. He had not quite mastered the lines but he completely won over both audiences and critics with his portrayal of one of the bard's greatest comic inventions.

So much so, that he later appeared, again as Falstaff in Olivier's film of Henry V . Although only described in passing by Shakespeare, Falstaff's deathbed scene was specially written for him. His classic parts continued with Menelaus in Offenbach's Helen, as Sancho Panza (twice - once in a silent version) and in Chu Chin Chow.

Robey's contribution to charity continued unabated, appearing in troops entertainments and concerts, helping to raise over Ł2m towards War Savings. Almost at the end of his life in 1954 he finally accepted a knighthood and died later that year on 29 November in Saltdean Sussex.

The following letter was recently discovered in a programme/script of Robinson Crusoe written by James Hewson. He was asking Robey if he would be interested in playing Will Atkins in the intended 1916 production. Robey obviously never returned this script as requested, and the letter remained tucked inside. 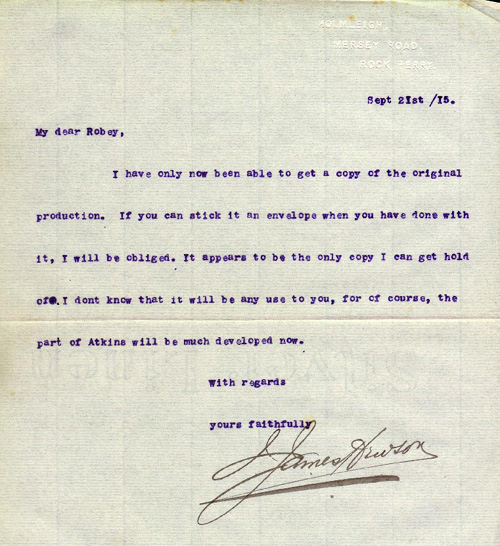