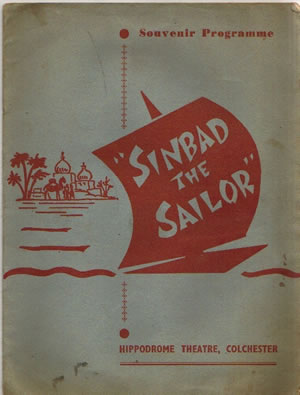 As my father often used to say, fitting a red indian sharpshooting act into traditional English panto wasn't easy. Even the most inventive scriptwriter would find it difficult to write the required scene into Cinderella or Jack and the Beanstalk. 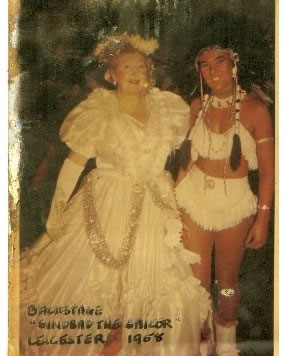 My parents were partners in the act Little Beaver and Maree, and until Sinbad the 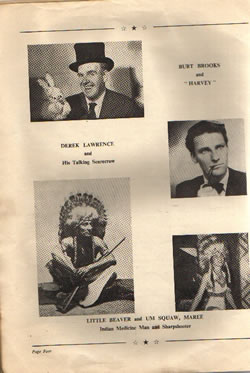 Sailor came along, they had never appeared in a panto. But Sinbad was perfect - he sailed the Seven Seas, and one of those ports of call included a red indian village - as well as that, my father, with his hawk nose and brooding onstage presence, was perfect for the role of the Lord High Executioner in the first scene. His nom de plume for this was Olaf Jak.

Sinbad was an annual treat after the first triumphant  year. We never had so much fun with a show. The cast became like old friends, and when newcomers were added, they quickly became part of the Sinbad `family".

Sinbad also kept with the times - the traditional `pantomime dame' started out with the inimitable Sydney Barnes, but eventually the role was taken by a woman - while the Principal Boy went from the leggy Pauline Lucas to the big voiced Brian Budge.

Every scene was magical, from the Port of Balsorah in the opening, with its thriving bazaar, to the underwater paradise that closed the first half.

I made my theatre debut with Sinbad, playing Yogi Bear in a parachute suit turned inside out, the sheepskin lining dyed yellow. Yogi helped entertain the children during the interval, and on one occasion, joined the rest of the cast tacking itself onto the tap dance marathon in Diamond Valley. I also appeared in the bazaar scene as a scrawny little harem girl.

Being with that panto was like have an annual family reunion. I will never forget it.