We at IBY were saddened to hear of Brian's death on Christmas Day 2015 and pay tribute to our friend with the article from 2012 celebrating his 25th year as a Sister/Dame for Qdos. 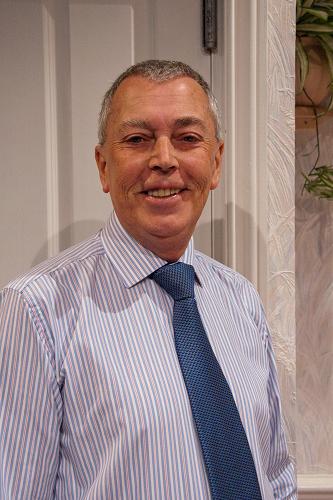 Brian Godfrey has recently celebrated Twenty-Five years as pantomime Dame and Ugly Sister for Qdos. This year, 2012 he will be appearing as 'Sister' at the Alhambra Theatre Bradford enjoying one of the longest panto seasons in 'Cinderella'.

2012 has been a busy year for Brian. The New Year was spent at the Civic Theatre Darlington in 'Cinderella' with Jimmy Cricket, Deena Payne and Ray Quinn. He has just finished appearing and co-directing 'Wife Begins At Forty' at the Yvonne Arnaud Theatre in Guildford.

Brian's career has spanned all aspects of Theatre, Musicals, Farces, Films, Television and, of course Pantomime. IBY is proud to turn the Spotlight on this versatile Performer and Director! 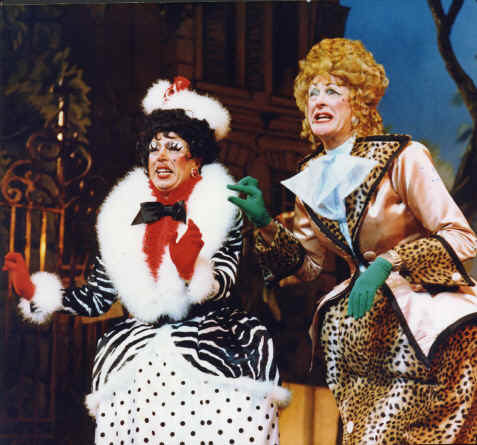 Brian Godfrey was born into a family that already had Theatrical connections. His Grandmother was an actress, and had appeared in pantomime at the old Surrey Theatre. His Uncle - his Father's brother was the television and film actor Tommy Godfrey.

Tommy Godfrey was a familiar face on TV in the 1960's and 70's from appearances in Sit Coms like 'Love Thy Neighbour' and 'Mind Your Language', and had appeared in the Ealing comedy 'Passport To Pimlico'. Tommy was a seasoned Variety performer who specialised in comedy and dance, and appeared as one of 'The Crazy Gang' in 'Underneath The Arches' with Roy Hudd in the West End.

Both Tommy and Brian were South Londoners, Brian continues to live South of The River today. He saw his Uncle Tommy in pantomime as Captain in 'Dick Whittington' at the Streatham Hill Theatre when he was a boy.

At the age of fourteen he had the distinction of appearing in the Judy Garland film 'I could go on Singing' in 1963. The film starred Judy Garland and Dirk Bogarde, with scenes filmed at the London Palladium.

Brian made his  early Television debut in1964 when he made appearances in 'Z Cars' and 'Dr. Finlay's Casebook

In 1965 The BBC opened their second channel BBC2. Previously the Television picture was composed of 405 lines. Now it was changed to accommodate 625 lines  for a clearer picture. BBC2 celebrated with an hour long drama as part of their 'Theatre 625' series. Brian appeared in this.

That same year Brian made his film appearance in 'Queen Kong!'- a film that has yet to appear on cinema screens! Due to an injunction by the Film Director Dino De Laurentis, the film was withdrawn- De Laurentis produced a Kong remake that year and this spoof version has now achieved cult status! It starred Robin Asquith as Ray Fay, with Rula Lenska in the role of Luce Habit, British Film Star and pantomime Principal Boy Linda Hayden as a singing nun, and Hammer Horror Star Valerie Leon as The Queen Of The Nabongas!

Brian continued to appear in theatre and in television that included a season with The Kenny Everett Television Show (1982-83) and playing the role of Jimmy Jasper in 'Hi De Hi'. In this episode Paul Shane's character Ted Bovis is sacked from Maplins Holiday Camp, and the boss Alec Foster employs comic Jasper to replace him. Brian appeared in 2000 in Carlton Television's series 'Barbara'.

Paul Elliott produced 'Run For Your Wife' in London's West End, and around the world. He recalls Brian's first entry into the world of Farce for Elliott and Cooney:

' Brian was introduced to the team by Robin Askwith when we were at the Criterion Theatre and Ray Cooney and I cast him as "Bobby Franklin" in "Run For Yor Wife" [which I produced in London and around the world] and he played the part more times than any other actor...and was by far the best "Bobby" the play has ever had.

On the tour of "Wife" with Les Dawson I was forced to cast another actor..and with 2 days to go before we opened in Blackpool I fired him and Brian stepped in and did the entire tour and Les loved him so much that when we did the show again with Les he insisted that Brian was in the show.

Brian also was in my play "There's No Place Like A Home" which did 2 tours with a wonderful "geriatric" cast of Gorden Kaye, Ray Allan and Lord Charles, Brian Cant, Ken Morley, Tony Adams, Joan Savage and Peter Byrne and was the associate director...[ I hope he will be in it again at the Mill at Sonning in April of next year!]

If all people in this industry were as nice and as talented as Brian Godfrey it would be a better world! '

Brian has a long working relationship with 'The Master Of Farce', Ray Cooney, and has appeared in many of his comedies- Brian played Bobby Franklyn in 'Run For Your Wife' in 1985 at The Duchess and The Whitehall Theatre, as well as 'Caught In The Net', 'Two And Two Make Sex', 'Cash On Delivery' and 'Wife Begins At Forty' at The prestigious 'Mill At Sonning'.

He has toured in 'Run For Your Wife' in Canada- North and South, and Ireland '“ North and South and throughout the UK alongside the legendary Les Dawson.

Ray Cooney had this to say about Brian recently:

Brian became a member of the 'Ray Cooney Players' early on in his career - I think it was 1602. Now, whenever the opportunity arises, I cast Brian in my productions - and, even if the opportunity does not arise, Brian insists I cast him. So, the fact of the matter is, Brian has been in all my productions since he was sacked by William Shakespeare for corpsing in the Graveyard Scene.

Brian has appeared in  'Funny Money' by Ray Cooney in the Far and Middle East tours for Derek Nimmo, and on board the QE2 appearing and directing two plays and a musical. He directed 'Cash On Delivery' in Israel, and in 1999 directed 'Run For Your Wife' at The Churchill Theatre Bromley and for the Summer Season at Bournemouth. At The Mill Sonning Brian appeared in 'Two Into One' in 2010, and recently directed 'Wife Begins At Forty' appearing with Vicki Michelle at Sonning in 2011, and in the comedy 'Holiday Snap'.

Most recently Brian has appeared alongside many of Ray Cooney's 'Repertory Players' '“ the stars of his hit comedies, in Ray's forthcoming feature film 'Run For Your Wife' due for release this year.

Outside of the world of Cooney, Brian has appeared in London's West End in the revue 'Off The Peg', and in the musical 'You're A Good Man Charlie Brown' in the role of Linus.

Brian has toured extensively and tours include 'Lend Me A Tenor'- another Middle and Far East engagement,  'The Mating Season' with Sid James, 'Come Blow Your Horn', 'Babes In Arms', 'Let's Go Camping!' and the Stage Version of 'It Aint Half Hot Mum'.

Paul Elliott produced  'Run For Your Wife' in the West End  and tours in the UK and abroad. His Pantomime company E&B Productions first cast Brian as Ugly Sister in 1987. After playing 'Sister' for eighteen years Paul devised and directed Brian's solo Dame in 'Aladdin' at the Orchard Theatre Dartford, with Brian Conley starring as Aladdin.

I do remember over 25 years ago I was in the dressing room at the Criterion theatre doing RUN FOR YOUR WIFE when Paul Elliott called in and asked me if I fancied doing Dame for him. I thought about it for a few seconds and said " Not sure, don't know if I'd be any good at it. But I don't mind having a go at Ugly. Because if it all goes wrong I can blame it on the other  bloke!!!" So that's where it all started!

This pantomime ran until February 6th 1994. 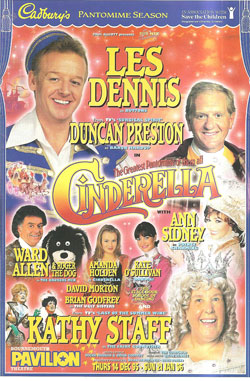 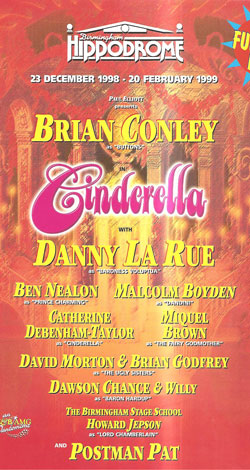 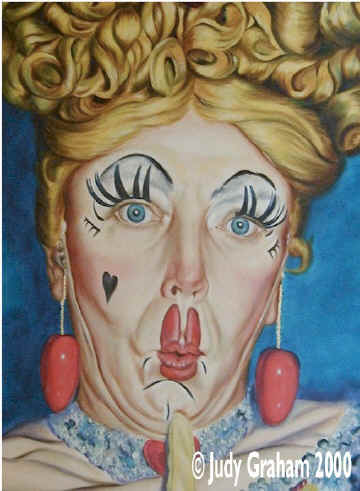 This imagremainremains the copyright of Judy Graham and cannot be used without permission.

Brian Godfrey Directed pantomime here for the first time. The Pantomime once again starred Bobby Davro and Melinda Messenger. Melinda was pregnant, and her role was played by Melanie Marshall. 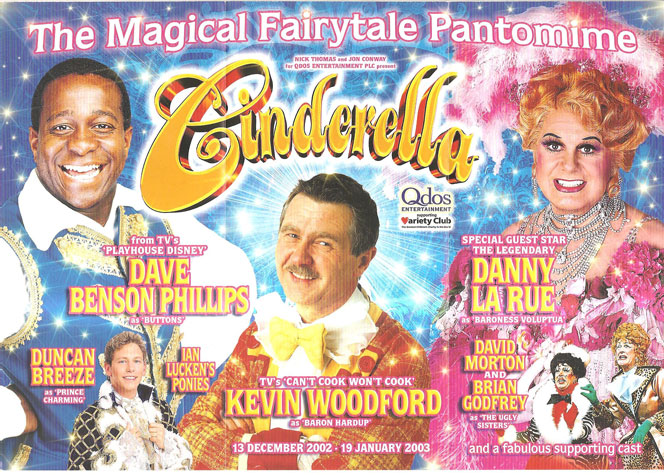 Brian Godfrey directed this pantomime. He did not appear that year. Sisters were played by David Moreton and  Simon Butteriss. It starred Danny La Rue, Kevin Woodford and Dave Benson Phillips. 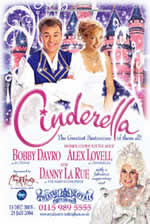 Directed and devised by Paul Elliott - Brian Godfrey in his first Dame role as Widow Twankey with Brian Conley starring as Aladdin, and Dawson Chance. 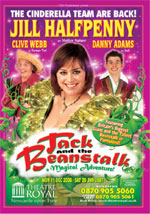 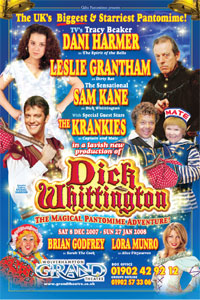 Brian Godfrey as Sarah The Cook. The Pantomime directed by Sam Kane who played Dick, The Krankies as Captain & Mate with Leslie Grantham as King Rat., Dani Harmer . 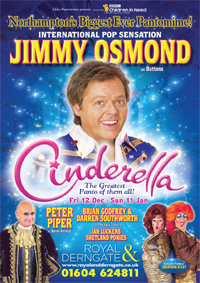 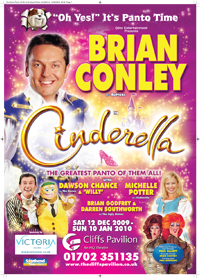 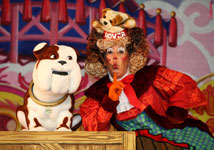 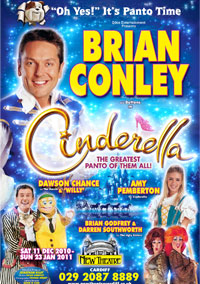 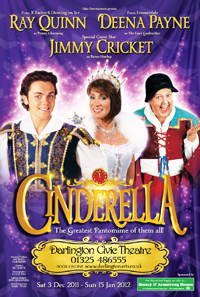 I have known Brian for over 30 years, we first met in Guildford where Brian was giving his '˜Ugly' and I was directing Cinderella starring Bonnie Langford, we became great friends and have worked together every Christmas since. Brian is a one off, a consummate professional, and genius comic actor, whether in farce or pantomime, his attention to detail and timing are spot on.

It's not often one meets actors who are happy to graft at their craft, never moan, and always approach every job with incredible enthusiasm, be it in performance or directing,  Brian has all those qualities. With a great sense of humour, he is a lesson to us all in dedication and is the ultimate pro! A Panto legend!