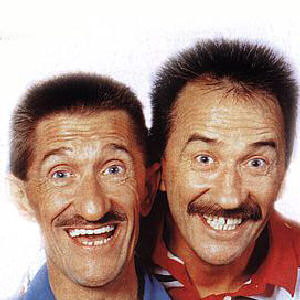 Barry and Paul- 'The Chuckle Brothers' have combined successful careers in variety, pantomime and television to become the top 'double Act' to appear each year in pantoland.

They come from a 'Showbiz Dynasty'-their Brothers, the 'Patton Brothers' continue to appear in panto every season, and their Father, Gene Patton was a popular variety star. See also our Patton Brothers article.

Gene Patton began as James Patton Elliott- Jimmy Elliott, a whistling comedian and dancer. His wife Amy was a dancer with the Rodney Hudson Troupe. Their family consisted of Jimmy and Brian, Sheila, and Paul and Barry, The family lived in Rotherham, and were constantly on tour.

Whilst principal comic in the Number 10 RAF Gang Show in 1943, Jimmy (Gene Patton) discovered the 19 year old Peter Sellers was in his company- with a great desire to be a drummer in the five piece band. The Gang Show toured India and Burma, covering over 30,000 miles, and during this time Jimmy encouraged the young Sellers to take part in sketches and routines. By the end of the tour Peter Sellers was Gene Patton's feed, as well as performing his own solo impersonation spot!

The eldest brothers formed the 'Patton Brothers' while Paul and Barry later adopted the working names of 'Harman & Elliott' before becoming 'The Harman Brothers' and appearing in Summer Season, Circus and in Pantomime

Barry (born 24th December 1944) and Paul (born 18th October 1947) began entertaining from a very early age. In the 1980's they underwent another name change, and became 'The Chuckle Brothers' â€“ they had already appeared in over a decade of pantomimes as the 'Harmans' before they appeared on bills with their new name.

In 1967 they won 'Opportunity Knocks' on television, and later went on to become 'New Faces' winners in 1974.

In 1983 they appeared on television screens with a canine companion- not the Chucklehounds- that was to come a couple of years later- but with Roger The Dog and Ward Allan, in Ward's BBC 1 series 'The Roger The Dog Show'. Paul & Barry had previously been the 'warm Up' act to Ward Allan's ventriloquism in his stage tour. It was during this tour that a management saw them perform, and the road to 'Chucklevision' via the 'Chucklehounds' began. In 1985, after appearing at Cardiff in pantomime, they got their break into the world of television appearing as 'The Chucklehounds' on children's TV, and released from the confines of the lovable dog costumes, they followed in their success in 1987 with 'Chucklevision', as popular now as ever with children and- it has to be admitted- adults throughout the country! They have a large student following for their TV and stage tours in the UK. The series is shown throughout the world- The Chuckles brought the skills and routines of pantomime into the living rooms, attracting new audiences with every series. 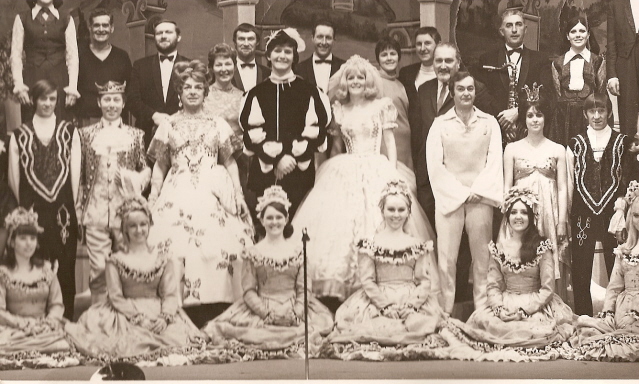 The cast included Jonathan Prince (King Hearty), Jean & Peter Barbour as Spite & Blunderbore, Sandra Wrennall as Fairy and the Harmon Brothers as Village Policemen AND Daisy the Cow! Paul & Barry can be seen 4th from left and 4th from the right.

As 'The Harman Brothers', AKA Paul & Barry Harman AKA Harman & Elliott. 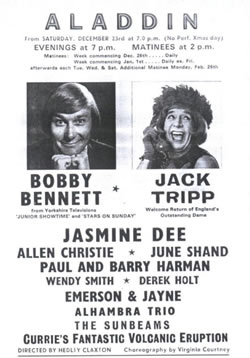 Pantomimes as 'The Chuckle Brothers'