Sleeping Beauty was once one of the most popular pantomimes in the United Kingdom. Recently it has seen somewhat of a revival.

The origins of the story are by Charles Perrault.

In Perrault’s version the story tells of a King and Queen who long for a child, and finally are rewarded. They arrange a christening and invite all the known fairies in the Kingdom. They find seven fairies. Each fairy will bestow a gift upon the Princess Aurora.

Each fairy has a gold and jewel studded place setting, with a gold cover for the dish. The Christening commences. Unexpectedly an old crone appears- she is in fact the eighth fairy who, shutting herself away in a tower for fifty years has been forgotten.

The “Bad” fairy, called Uglyane by Perrault, is angry that she was not invited. She is however treated with courtesy by the King who arranges an extra setting at the table. Unfortunately there is no gold cover for the dish- only seven were made, and Uglyane takes offence.

Seated next to her the Fairy Hippolyta hears the old crone muttering, and fears she will do harm to the child in her gift. Hippolyta leaves the table and hides behind the curtain awaiting Uglyane’s gift.

Uglyane brings no gift to the child, she brings a curse. She vows that the Princess will reach her sixteenth birthday and will prick her finger on a spindle (the sharp point of a spinning wheel) and die. She then leaves the Christening and returns to her tower.

Hippolyta tells the stricken court that, although she cannot reverse the spell of Uglyane, she can alter it. The child, with her blessing, will not die, but will merely sleep for a long period of time. She will then be awakened by the kiss of a handsome Prince who will fall in love with her.

Sixteen years pass. In Perrault’s version the Princess Aurora is wandering the palace one day, on her sixteenth birthday, and finds a room in a tower she has never been to before. Inside the tower she finds an old servant spinning. The servant is unaware that the King has prohibited spinning wheels throughout the Kingdom. The Princess is invited to watch her spin- something she has never seen before, pricks her finger on the spindle, and falls to the ground, apparently dead.

The old servant rings the alarm bell, and the court is summoned. The King dispatches a dwarf wearing seven league boots to find Fairy Hippolyta. The Fairy arrives from many thousands of leagues away, and casts her spell over the court, so that everyone within the palace will fall asleep too, ensuring her Princess will not be lonely when she wakes up.

Thorns and Briars grow around the Castle, and soon it is almost invisible and nearly forgotten. A passing Prince, and his father the King hear of the legend of “The Sleeping Beauty”, and Prince Florimond declares he will rescue her from her sleep.

The Briars and thorns part to admit him to the Palace. He discovers the court  where they lay asleep. On exploring he discovers a bath has been prepared for him, and a fine suit of clothing laid out. The clothing is of the era when the court fell asleep.

Prince Florimond reaches the tower, discovers the sleeping Princess and awakens her with a kiss. The court awakes, and the briars part to admit the Prince’s father. The Two Kings discuss how they are reaching an age when they will not be ruling for very much longer, and, Prince

Florimond, declaring his love for Princess Aurora, they agree to the marriage. The two kingdoms will become one. Prince and Princess live happily ever after.

THE PANTOMIME- a “Time” Pantomime. 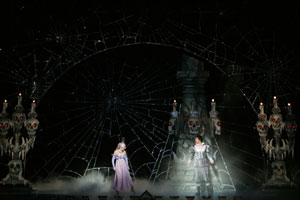 The Pantomime version of “The Sleeping Beauty”  tells the story as outlined by Perrault, and often follows this plot:

The Panto often opens with the Christening Scene. The Bad fairy gives her curse, and vanishes. The Good Fairy casts her spell- that the Princess will not die, but sleep for one hundred years. In some versions the pantomime opens with the Princess’s birthday  party, and the christening scene is performed as a “flash-back”- the Fairy telling us what happened in the past.

The next scene is usually set outside the Palace, and celebrates the forthcoming birthday of the Princess. Generally it is her eighteenth birthday, 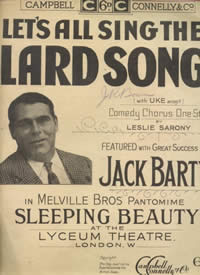 but it can also be her sixteenth birthday. The King is seen to be banning all spinning wheels from the realm.

The Princess often has a friend, sometimes a jester, sometimes a lad who works in the Palace kitchens.- the comic. In “Sleeping Beauty” The Dame was traditionally the Queen, and sometimes (especially more recently) the dame can often be the nursemaid to the Princess, or her nanny. On odd occasions there have been two dames- both Queen and Nursemaid.

There are two differences to the original Perrault story- when the Princess encounters the spinning wheel in the palace, it  has generally been placed there, and is being worked by the Evil Fairy. She witnesses the Princess prick her finger, and leaves believing she has triumphed.

The other main difference to Perrault’s version, and the version of “Sleeping Beauty” the ballet is the Prince. It is not really economical to employ an actor as Principal boy, and then not let him enter until Act two.- Although this has been done. Generally the plot is worked so that the Prince arrives to attend the Princess’s birthday party, they meet, fall in love and are able to sing a duet or two before she pricks her finger and falls asleep. 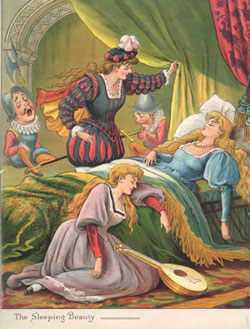 Whatever happens, of course, they cannot kiss in Act One! That would ruin the plot- after all, it is “Love’s First Kiss” that will awaken her in Act Two!

By working the plot, the Princess sleeps, and the Good Fairy casts a spell to make everyone else fall asleep for one hundred years. The Prince is often kept away from the Palace so he does not get affected by her spell. Act one usually finishes with a tableaux- the Sleeping Beauty and the court starting to fall asleep.

In Act Two- remembering that the story is almost finished- there is often a device where the Prince, aided by the Good Fairy will travel through time- one hundred years into the future. He is often given a magic sword by the Good Fairy, and has to cut his way through the thorns that spring up around the Palace- created by the Bad Fairy’s magic.

He enters the Castle and wakes the Princess with a kiss. This however is often too near the start of Act Two to finish the pantomime, and all that remains is to defeat the Wicked Fairy. Often there is a sub-plot: The Prince, or Princess may be kidnapped by the Evil Fairy- the comedy characters- Dame, Comic and King might well go to her Lair to seek the kidnapped Boy or Girl.

Sometimes the influence of Disney is felt, and the Bad Fairy will “transform” into a dragon, and be slain by the Prince. Evil is defeated, true love has won through, and the pantomime ends- happily ever after.

There are no straight forward traditional character names for “Sleeping Beauty”

Perrault gave the Princess the name “AURORA”-as beautiful as the dawn, but she can be called ROSE, or BRIAR-ROSE. She has had many names including  “PRINCESS BEAUTY”, (Prince & Emile Littler’s pantomimes, Drury Lane 1920’s, Lyceum 1933) “PRINCESS MELANIE” (Palladium * again 1964)PRINCESS SABRINA, amongst others. In general the most common name for her would seem to be PRINCESS BEAUTY.

Again, there is no set traditional name. Perrault called him PRINCE FLORIMOND, he has also been called PRINCE FLORIZEL, PRINCE HAL, PRINCE RUDOLPH, PRINCE MICHAEL, PRINCE SILVERTHISTLE (The Emile & Prince Littler pantomimes that had a Scottish Waterfall scene) THE PRINCE OF CALEDONIA, but in General the name PRINCE FLORIZEL seems to be the most common. Today it is more than likely that Florizel would be dropped in favour of less “florid” names, and he might well be a Prince Michael, William or possibly even Harry!

Disney named her MALEFICENT- a copyrighted character name, and she has frequently been called CARABOSSE- the character in the Ballet version of “The Sleeping Beauty”. She has also been named simply “THE WITCH”, “THE WICKED FAIRY”, SOMNIA, (in the Littler pantomimes) MALIGNA (Drury Lane) FURIOSA, FURIOSO, but overall the most common name is CARABOSSE. She is almost always described in Programmes as “A Witch”- she is, in fact just a Fairy who has gone to “The Dark Side!”

Mostly she is simply referred to as “THE GOOD FAIRY”, but she has been named at various times “FLORIZEL-guardian of Fairyland”, FAIRY ROSEYDAWN, “FAIRY STARDUST”, “FAIRY CLARIBEL” and “FAIRY FLORA” among other names. She has even been called “FAIRY GODMOTHER”, which, of course, she is!

Traditionally the Dame was the Queen, and is most often referred to as “THE QUEEN”. She has also become “QUEEN QUIBBLINA” (Littler pantos) “QUEEN GUINEVERE” and “THE QUEEN OF HEARTS”. In one recent pantomime the King and Queen were “KING RICHARD & QUEEN JUDY”-nice to see panto keeping up with the times!

When the Dame is not the Queen, she has had various names- none of them traditional- they range from “DAME DOLLY”, “NURSE NELLY” and recently “DAME DOT COM!”

Most often referred to as simply “THE KING”, he has at times been known as “KING ROLO BOLO”, “KING SATUPON”, even “OLD KING COLE”- drawing from the nursery rhyme. Since Perrault did not name him, his name is also not a traditional one.

In some versions of “Sleeping Beauty” the chief comic is the court jester. He has been called “PRESTO THE JESTER”, or CUTHBERT THE JESTER”, he has been a page- “RUDOLPH THE PAGE” and when he works in the Palace kitchens, he is most frequently known as “MUDDLES”. 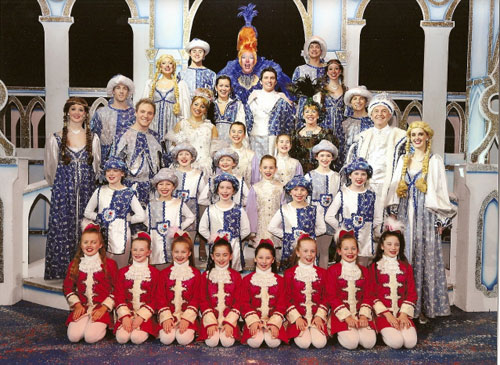 Other links which may be of interest 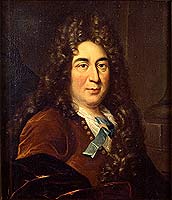 Perrault is responsible for the popularity of six Fairy Stories that have all become pantomimes. A Retired Civil Servant in France during the 17th Century, he published his book “Histoires ou Contes du temps passé. Avec des Moralitez” in 1697.

Perrault, like the Brothers Grimm did not create these stories, but simply wrote them down, generally without embellishment or alteration from the folk lore he had heard. The tales are simple, and made his book world renowned.

He wrote eight tales- two of these did not become popular , but the others have been transformed into Pantomime. His book contained “Sleeping Beauty”, “Little Red Riding Hood”, “Cinderella”, “Puss In Boots”, “Bluebeard”, “Hop o’my Thumb” and the lesser known “Diamonds and Toads” and another “Riquet A la Houppe”.

“Bluebeard” and “Hop o’ my Thumb” were popular Victorian subjects for pantomime, but have now vanished, and “Little Red Riding Hood” and “Puss In Boots” are rarely performed professionally today.

Perrault did not explain where he had heard or learned of these stories, many of which dated back to the ancient East- developed from ancient folk lore and passed along verbally. There is a possibility that it was actually his son, Pierre, aged eighteen when the book was published who put the stories down on paper, aided by his father. They were translated into English by Robert Samber as “Histories, or Tales of Past Times, by M. Perrault “ in 1729. This version introduced his world of fairy tale into the English language.