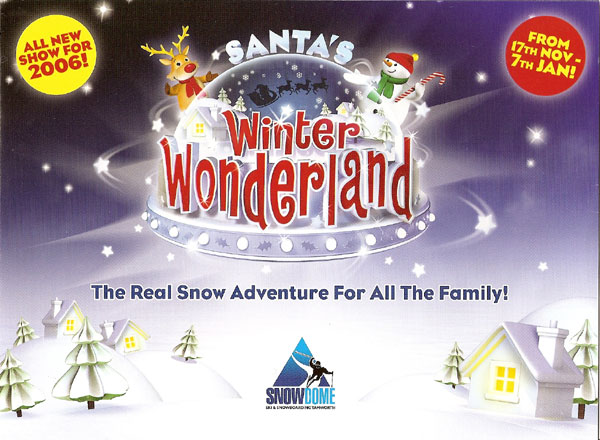 The SnowDome in Tamworth

Nigel has just returned from the Frozen North- well, Midlands actually, where his production of “Santa’s Winter Wonderland “ opened on Friday. He wrote and directed the show which is now packin’ ‘em in on the slopes of Tamworth!

The Show is in a unique setting- a venue where it snows every day of the year, and consequently made the perfect site for Father Christmas to join some pantoland characters for a season.

The show is the finale of an adventure through Winter Wonderland- children enter a snowy world where they can choose to spend half an hour playing inside in the snow (not often you hear that is it?) or can take a journey on a motorised sleigh-mobile around the complex. After spending a while in the “Brum” cinema- the car, not the City- they enter a purpose built auditorium to watch a twenty minute production featuring Santa and some familiar panto folk- The Fairy Godmother, The Wicked Abanazar, The Pantomime Dame and “Billy”- the lad who blunders into the magic world of Pantoland.

The Show runs throughout the day and into the evening at regular intervals. Produced by Ian Sandy of TPO, and the Snowdome Tamworth, there are two casts sharing the stage, ensuring that the show continues in “Windmill” fashion from morning to night!

Cast One has Marcus Fernando as Abanazar, Tina Hoffman as The Fairy Godmother, Andrew Cullum as Dame, and Robert Jay as “Billy”.

Cast Two has Edward Thorpe as Abanazar, Clair Sladen as The Fairy Godmother, Phil Hemming as Dame and Phil Beck as “Billy”.

Both companies have just the ONE Santa of course- as there is ONLY one. He sometimes uses the alias J.J.Teague.

At the end of the performance the audience continue on their journey visiting Santa’s real reindeer, his farmyard of sheep, pygmy goats (very cute, slightly whiffy), pigs and piglets, rabbits and guinea pigs, passing by Santa’s house until they reach Santa’s sleigh.

As they leave the Snowdome they can sit and gaze at the ski slopes with it’s snowboarders, and ski-ers with a warming drink before heading off into the tropical balm of Tamworth itself.

Nigel wishes to say “A Merry Christmas and Many thanks!” to both the casts who are, as we speak, creating a little panto magic every half an hour!

Now Onto THE BIRMINGHAM DIARY 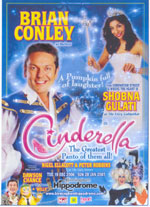