The Peacock Pantomime Theatre at Tivoli 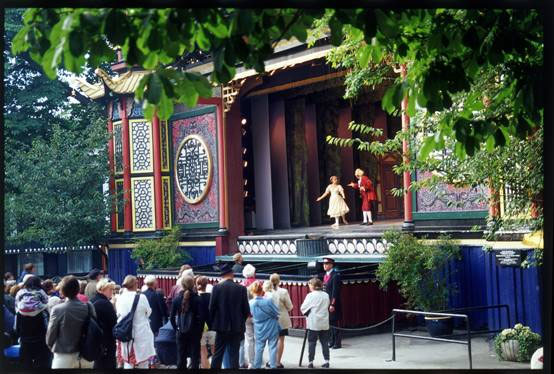 It was the Tivoli pleasure grounds in Copenhagen that gave Walt Disney the idea for Disneyland. Tivoli is still a fascinating place to visit and it contains a remarkable survival in the form of the Peacock Pantomime Theatre. Harlequinades are still performed every summer in this open-air stage (the stage is under cover but the audience are not). Just as once happened at the end of Victorian British pantomimes, stories of Harlequin and Columbine are played out with original scenery, costumes and stage effects, as they have been for more than 125 years in this theatre, where Pierrot himself first appeared in 1843. Two visiting troupes, one from England and one from Italy, started the tradition – so it is perhaps not so surprising that the performances contain so many echoes of pantomime in the British sense.

The characters vary but will always include the crotchety old Cassander, his beautiful daughter Columbine and his servant the white-faced clown (and star of the show) Pierrot. At some point Harlequin will appear, perhaps in disguise but usually in his traditional diamond-patterned tunic and tights and carrying a slap-stick. The convention is that, if he is wearing a mask, he is invisible to the other characters. There are usually a variety of magicians and fairies as well as villagers and drinking partners. Interestingly, in all the performances I have seen, the fairy enters Stage Right, although magicians and sorcerers tend to arrive through the central trap door. This may be a later change however as there is a Stage Left trap door in place. The whole show is performed in mime to the live music of the likes of Strauss and Mozart as well as some composed at the theatre when the various pieces were first performed. There are seats for 120 but up to 1000 can stand – although I have never seen more than 200 or 300.

The company perform many different plays from their repertoire, most of them more than a hundred years old. Each play lasts around 30 minutes and a description of one seen last summer will give a flavour. Pierrot’s Outing to Dyrehaven (first performed in the 1850s) has a bigger cast than usual, with a group of children as well as a large chorus, and tells us a trip to the original pleasure grounds outside Copenhagen – still in place and much older than Tivoli itself. Since this pleasure ground also has a resident Pierrot, there are in fact two Pierrots on stage at some points – leading to some false mirror routines familiar from many British pantos. The scene changes instantly from a Copenhagen street to a drinking tavern, and from the deer park to the pleasure grounds. There is lots of slapstick, drunkenness and falling over, as well as collapsing props and transformation scenes. 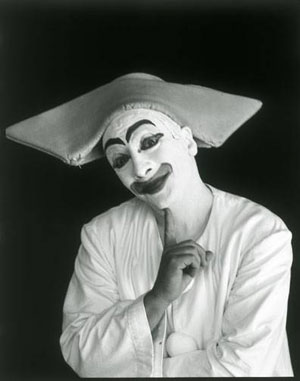 The theatre is designed to look Chinese and is very striking, with its curtain of a peacock’s tail splitting in the middle and sinking below the orchestra pit (which takes 5 men to operate). Sets consist of backcloths (Roman blind style as there is no fly tower) and ranks of wings which change in unison through clever use of rope controls (and cued by whistle as was once the case in all theatres, leading to the common superstition about unwarranted whistling). The only scenery get-in is by way of a special large window in the only original backstage toilet. The backstage tour now offered to visitors includes plenty of opportunity to see the rather basic under-stage dressing rooms as well as the stage itself where wing space is tiny. The stage has a very steep 6% rake. Set changes are demonstrated to tour groups and the enthusiastic guide (the Director of the theatre) speaks good English – although he mostly kept to Danish during my visit as all the other participants were Danes.

The stage has several traps operated manually by winding a geared wheel very quickly. Small traps are used for costume transformations, with an old woman gathering sticks in the woods (definite link with Cinderella there) being transformed into a fairy as her cloak is rapidly pulled below the stage and disappears. Until very recently, sudden flames and smoke were still produced by the use of lycopodium powder made from dried moss, and may still be now – I am not sure about that. Fireworks were used for pink Bengal light till recently, but since that is toxic, I was told last year that since 2002 modern lighting is now used. Lighting is also modern and electric, although it does not play a major role as most performances are by daylight. Costumes are still made as traditionally as possible, with the use of rice starch.

The one part of the performance which is mystifying to non-Danish speakers is the very end, when the audience shouts to Pierrot and he leads them in a chant. This all sounds remarkably like “Oh no he isn’t” but according to Erik Řstergaard’s detailed website, the children shout “Speak up Pierrot” and he asks them if they enjoyed the performance. One last unique quirk is the practice of hiring out periscopes to the audience members at the back – a fascinating survival as this has been going on since the 1920s and still uses 40 of the 200 originally made.

Every pantomime fan should visit this theatre; who knows for how much longer it will survive? The season opens in mid April and continues till mid September. Entry to the Pantomime Theatre is free once you have paid for your ticket to Tivoli, and there are two different performances on most days – although only one is a Harlequinade, with the other one being a ballet. The dancers (who are from the National Theatre) have one day a week off so it is best to check the schedule outside before buying a ticket. Guided tours backstage are a new event and are usually on Wednesday afternoons – and recommended!

Further information about Tivoli and the Pantomime Theatre on the following websites:-

www.erikoest.dk/panto.htm - Erik Řstergaard's website about the History of the Pantomime Theatre at Tivoli