This is another one of those 'work in progress' things - whilst browsing the internet we stumbled across www.tvchronicles.com which has some pantomimes from the late 60's, alongside the now regular ITV pantomime. That site has now disappeared and been replaced by www.memorabletv.com but there is no mention of the Television Pantomimes! We are very grateful to Julian Lane who has furnished us with a full listing of BBC Television Pantomimes from 1963 to 1973, and also very grateful to Chris Law at the BBC who filled in the blanks!

If you know of any more information or any more productions, please let us know at info@its-behind-you.com. 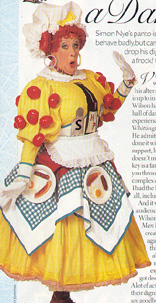 With:- OWEN MONEY as Wishee Washee / KELLY MARIE as Aladdin / MAUREEN REES as Maureenie the Genie

We are very grateful to James Brandon for the information on this production. 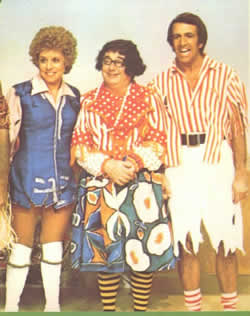 This was transmitted as a one-off Christmas Special, broadcast on Rediffusion TV on Christmas Day, 1967.   It was a shortened and adapted version of the 1964/65 Palladium pantomime.  Several songs were cut out of this TV version (including “Having Fun” and “Genie With the Light Brown Lamp”)  but several extra Shadows’ songs were included  (songs which had not appeared in the original panto version, including a new song, “Everybody Loves Me” for Abanazar.)

A number of the songs were actually mimed to the original LP recording, but some were performed in new versions, probably because they needed to be shortened or altered for the TV production. 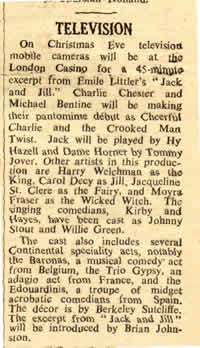 On Christmas Eve television mobile cameras will be at the London Casino for a 45 minute excerpt from Emile Littler’s “Jack and Jill”. Charlie Chester and Michael Bentine will be making their pantomime debut as Cheerful Charlie and the Crooked Man Twist. Jack will be played by Hy Hazell and Dame Horner by Tommy Jover.

Other artists in this production are Harry Welchman as the King, Carol Decy as Jill, Jacqueline St.Clere as the Fairy, and Moyra Fraser as the Wicked Witch. The singing comedians, Kirby and Hayes, have been cast as Johnny Stout and Willie Green.

The cast also includes several Continental speciality acts, notably the Baronas, a musical comedy act from Belgium, the Trio Gypsy, an adagio act from France, and the Edourdinis, a troupe of migit acrobatic comedians from Spain. The décor is by Berkeley Sutcliffe. The excerpt from “Jack and Jill” will be introduced by Brian Johnston. 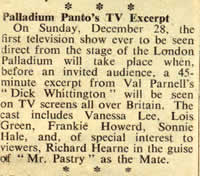 On Sunday, December 28th, the first television show ever to be seen direct from the stage of the London Palladium will take place when, before an invited audience, a 45 minute excerpt from Val Parnell’s “Dick Whittington” will be seen on TV screens all over Britain.

The cast includes Vanessa Lee, Lois Green, Frankie Howerd, Sonnie Hale, and, of special interest to viewers, Richard Hearne in the guise of “Mr Pastry” as the mate.

With:- Ann Maitland as Dick / Fred Douglas as the Cat / Betty Astell as Alice