from the collection of the late Mrs Mae Rogers

The illustrations shown here are from a collection acquired by Mrs Mae Rogers.

Mae Rogers was the Wardrobe Supervisor for Prince Littler, the impresario for a great number of years. As head of wardrobe she was responsible for upwards of six pantomime productions at a time, as well as the Prince Littler touring companies of plays and Musicals, including the long running 'White Horse Inn' and Brigadoon.

She worked out of the littler offices and West End theatres, such as the Aldwych and at times the Lyceum, and having made and supervised the pantomime wardrobes would be called upon to tour the Littler circuit overseeing the productions. Prince Littler had productions running at the Coliseum Theatre, in the 1930's  and around the country- at the Royal Opera House, Leicester, the Prince's Manchester, Streatham Hill, Brighton Hippodrome, Golders Green Hippodrome, Bristol, Cardiff and dozens of other venues through until the 1960's. Mae Rogers collected a vast wealth of theatrical memorabilia on her travels and in the course of her work.

Recently I got a call from her niece to ask if I would take a look at some of her late Aunt's collection of programmes and posters, and if the Kenneth More Theatre would like some of her trimmings for their wardrobe department. While I was there we looked at a lifetime of Mae's memories working with the Littler family, and with Blanche Littler, who had married George Robey (The Prime Minister Of Mirth) and became Lady Robey. Among the photographs and memorabilia were three small packages, wrapped in brown paper and tied with string.

Marked on one package in copperplate handwriting were the words 'Olympic Theatre. Dick Whittington 1892'

I can safely say I have never been as astonished as I was at the contents! By the time we had opened the other two packages- marked  'Crystal Palace 1890'  and 'Adelphi 1893', we were looking at over 130 hand painted designs by Charles Wilhelm, along with copious notes, fabric swatches and samples. A complete history of Victorian pantomime had been tucked away in a drawer since Mae Rogers acquired them sometime in the past seventy years!

The designs in the main can be catalogued in three sections: there is a great number of designs for either 'Whittington and his Cat' or 'Dick Whittington' from 1890, 1892 and 1898. The Theatres are the Olympic, The Adelphi and the Crystal Palace.

There is also a small collection of 'Cinderella' designs from the Lyceum Theatre's 1893/4 production in which the producer wrote in the programme: 'The costumes and accessories have been specially designed by WILHELM (to whom Mr.Oscar Barrett is pleased to acknowledge his indebtedness for many valuable suggestions'.

Looking through this amazing collection the first thing you notice is the skill of Wilhelm as an artist, and then, as we came across his notes and swatches, the great attention to detail that went into each and every one of them. There is a letter, presumably from his address in Chelsea to Oscar Barrett the producer outlining some of his designs for the 1890 Dick Whittington. 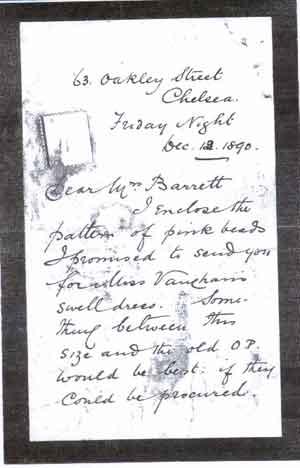 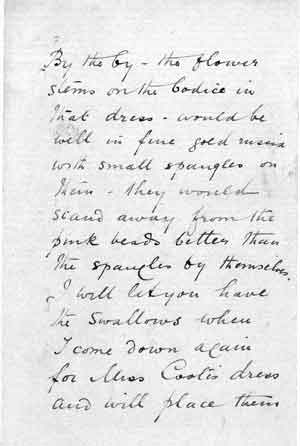 I enclose the pattern of pink beads I promised to send you for Miss Vaughn's swell dress. Something between this size and the old O.P would be best: If they could be procured By the By '“ The flower stems on the bodice in that dress '“ would be well in fine gold Russia with small spangles on them '“ they would stand away from the pink beads better than the spangles by themselves.

I will let you have the swallows when I come down again for Miss Coote's dress and will place them'¦'¦..

Sadly the rest of the letter is missing. The 'Swallows' refer to a dress created for Alice Fitzwarren, played by Miss Cootes. The illustration for that can be found below. 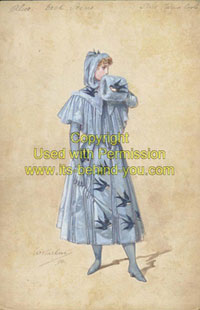 As someone who has been designing costumes for pantomimes for over twenty-five years, I find these notes and comments as fascinating as the beautiful designs themselves. My sketches are crammed away in a drawer somewhere in the Kenneth More Theatre, and others probably strewn across the country, in the desks of the makers and beaders. I took a quick look at some of mine, and discovered scrawled notes and faded faxes stuffed in amongst them- so nothing changes! I have to admit, having looked at this treasure trove belonging to Mae Rogers, I will now try to keep my sketches and notes in slightly better order- just on the off chance that someone will come across them in 110 years time!

Wilhelm even made what can only be described as 'Choreographic' notes as to how he envisioned seeing the chorus moving in his costumes- 'Effects to be gained by 16 children in 4 groups of 4 different blues'. How many times have I wished I had done that when designing a set of costumes graduating in colour and not being at rehearsal to point it out! 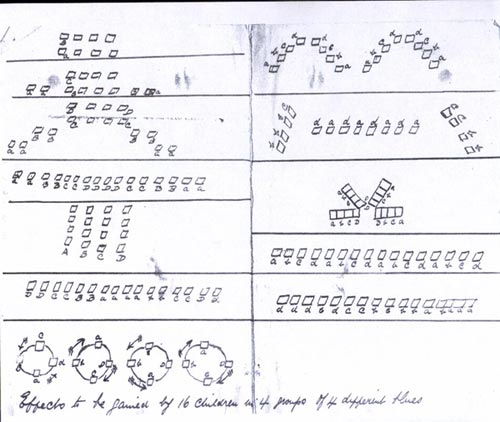 It was only when we laid all the designs out that I realised a few of the names of the cast were familiar. While Mae Rogers had the designs in her house since who knows when, I had two copies of the programme that accompanied the sketches in my house, programmes I'd bought over twenty years ago. It was fascinating to put that programme next to the original drawings and check off the cast list one by one. History was really starting to come to life! 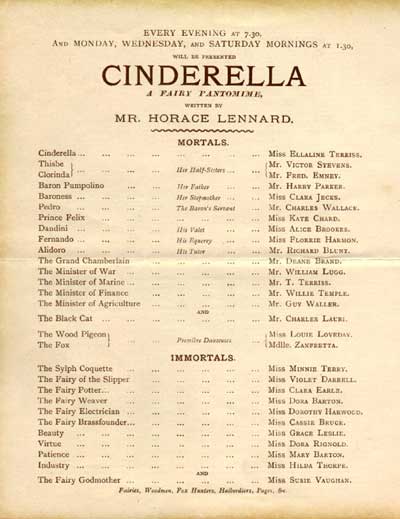 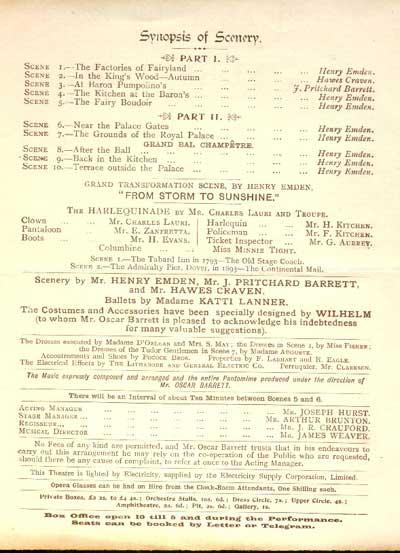 Although I knew that Victorian pantomimes employed vast numbers of performers, and large numbers of juveniles, I hadn't realised the full extent of it. Seeing a design with '12 Chorus Ballet',' 8 Large children', 8 Smaller Children', '16 Ballet costumes in this' and realising they are all in the one scene, along with 'supers' (Supernumeraries) as well as the cast of Principals- the full effect came to life. Every so often a swatch would appear, with a sample of the fabric pinned to it, accompanied by detailed notes: For example:

Mandolin tied up with big bunches of gold gauze ribbons about 1' wide.

When you look at the number of costumes involved in the 'Moorish Scene'- presumably when Dick Whittington is shipwrecked in Act Two, the detail on these eight 'secondsize' children is astonishing!

The costume of the Emperor of Morocco in that scene, played by Miss S. Vaughn is described as needing:

Interestingly too, Charles Wilhelm often grabbed whatever scrap paper was to hand to jot his notes down. Some are Comp Slips printed with the legend 'Mr. Oscar Barrett will feel honoured by the company of M'¦'¦'¦'¦'¦'¦'¦.. to witness the first performance of the Crystal Palace Pantomime entitled 'Cinderella', on Monday next December 24th, at 3 o'clock. Reserved Seat Ticket Enclosed.

Across this (presumably from the previous year) Wilhelm has scribbled notes for a Dick Whittington Moorish Scene, which then reappear on a more formal piece of paper attached to the sketch. There is evidence of 'recycling', where one sketch has the name 'Alice Fitzwarren' crossed through in pencil, and 'Maid Marion' replaced for example, but I tend to think this is not Wilhelm's hand. I imagine it is the hand of Oscar Barrett, the producer. I also presume this collection ended up in the hands of Mr Barrett, since Wilhelm would be unlikely to be in receipt of his own letter posted to Oscar Barrett. I imagine they were left in the Lyceum or the Adelphi for a great many years, recycled and used in other pantomimes before Mrs Rogers acquired them. 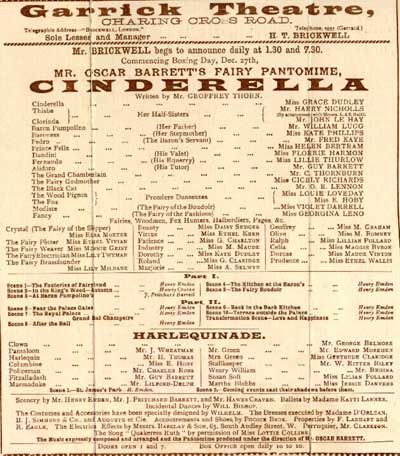 Wilhelm's design for Miss Genee's Hunting Costume in the ballet 'High Jinks' was obviously a trying time for him.

'She danced both hunter and hunted, depicting the exhilaration of the rider and the nimbleness of the pursued fox. The designer Wilhelm meticulously recreated a riding habit for her, but Genee objected to the accurate but uncomfortable woollen breeches. She got her way and had them changed to silk!'

Mander & Mitchenson  acquired designs and photographs of Wilhelm's productions such as 'Little Bo-Peep, Little Boy Blue and The Little Old Woman That Lived In A Shoe' (a bit of a mouthful when ordering tickets I would imagine?) in Covent Garden (1881), as well as 'Little Red Riding Hood', Her Majesty's (1883), 'Dick Whittington', Theatre Royal Manchester (1885), 'Sleeping Beauty' (1886) and 'Puss In Boots' at Drury Lane in 1887.

This collection of Mae Rogers solves many questions, but also leaves some unanswered. Perhaps scholars and historians reading this item might be able to answer them? There is evidence in this collection of several productions of 'Bluebeard'- references to an 1891 production costumed by him, and of  a 'Robin Hood' or possibly' Babes In The Wood' in 1892 with his designs. A 'Forty Thieves' in 1890 perhaps, a production of 'A Midsummer Night's Dream' (Ballet? Or Play?) and the mystery of 'Cinderella''¦ The sketches we have are male actors only- there are no sketches for Ellaline Terriss as 'Cinderella' in 1893 at the Royal Lyceum, or Kate Chard as Prince Charming, nor Alice Brookes as Dandini for example. Were these sketches left in the hands of the costumiers who executed the ladies gowns? The hands of Madame D'Orlean and Mrs.S.May perhaps, or are they in a collection somewhere else?

Sadly, when Mrs Roger's niece found these three packages there were a further two that had not fared anywhere near so well. Two sodden packages that had turned to mush. Who knows what other pieces of Theatre history might have been in them. Sadly they were too damaged even to hint at their contents.

WHAT HAPPENS TO THEM NOW?

For the moment the designs are to be valued as part of Mrs Rogers estate, and are in safe keeping. They are a major piece of research for scholars of design, costume and theatre. They are a magnificent reminder of how beautiful and lavish those late Victorian pantomimes must have really been. In this collection we have 130 pieces of art and 130 pieces of history, and I for one am incredibly lucky that I got to see them. I hope in the future everyone else will get this opportunity as well.

We are pleased to announce that the entire collection has been purchased by the Theatre Museum and a private collector, who in turn will bequeath them to the Theatre Museum. This guarantees their preservation and will allow them to be properly catalogued and displayed in all their glory.