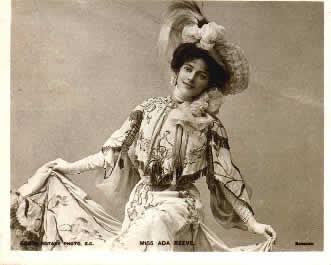 A 'True Artist' of Pantomime

Ada Reeve was born into a minor theatrical family in London, the first of many children, on 3 March 1874, and was registered as Adelaide Mary Isaacs. Her father Samuel Isaacs changed his name to Charles Reeves when he left home at sixteen to pursue an acting career.  Her mother, Harriet Seaman was a dancer billed as Harriet Saunders prior to her marriage in 1873 to Charles Reeves. During her childhood career in music hall Ada Reeve was billed as ‘Little Ada Reeves’ but by 1886 she had shortened her surname to Reeve.

Ada Reeve made her theatrical debut at the age of four in the pantomime Red Riding Hood at the Mile End Pavilion in Whitechapel, London on Boxing Day 1878. She gained valuable stage experience and on-the-job training playing minor pantomime roles at the Mile End Pavilion between 1878-90.  For example, she appeared in the children’s chorus in Jack and the Beanstalk in 1880.  At the age of ten, she toured in association with the Fred Wright Dramatic Company, a stock company of mostly family members, playing chambermaid parts, and she was cast as a tiny Salvation Army girl and also sang a solo in Dick Whittington at Dewsbury in 1882. Although Reeve was engaged to play child parts during her tour, she quickly learned that acting required versatility and flexibility and in an emergency she was required to wear adult attire and perform general utility work. She performed at the Pavilion Theatre, Mile End, in 1883-84 as the Old Man of the Sea in Sinbad the Sailor, and “was equipped with a long grey beard”. Reeve notes in her autobiography Take It For A Fact that:

This was an innovation, which drew considerable attention to me for in those days the part was usually played by a powerful character actor (such as George Conquest at the Surrey Theatre), who would burlesque the delirium tremens scene from that popular melodrama Drink. A child with a light little voice was certainly not what the audience expected.

In 1884 Ada Reeve was cast as Fairy Kindness in Little Red Riding Hood at the Mile End Pavilion, with her attendant sprites Marie Kendall and Lillian Bishop. The following Christmas season, she was teamed up with Ida Heath and Baby Langtry and they were billed as ‘the three wonderful infant artistes’ in Jack the Giant Killer again at the Mile End Pavilion. 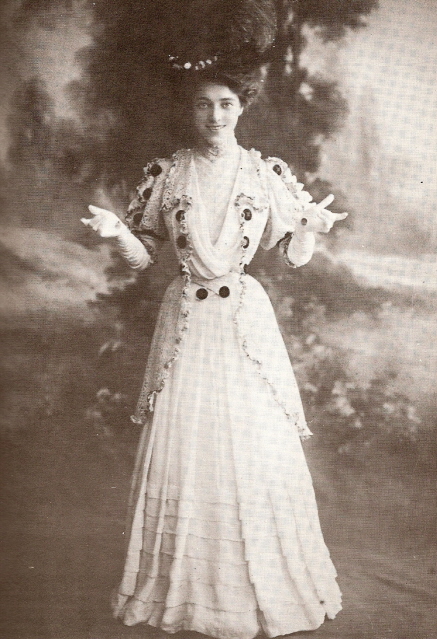 Ada Reeve’s adolescence was marked by her progression to more substantial parts. In 1888, at fourteen, she played the minor role of Boy Babe in Babes in the Wood at the Whitechapel Pavilion and in 1889 she had a good part, but still a minor one, as the Genie of the Bells in Dick Whittington at the same theatre. In 1890 Reeve was promoted to the Second Boy, Ah-Rong, in Aladdin again at the Whitechapel Pavilion and sang ‘I’m a Merry Little Devil’. Finally in 1891 Reeve was promoted to principal boy in The Old Bogie of the Sea at the Britannia Theatre. Reeve’s early training in pantomime culminated in her title role in Aladdin at the Prince of Wales’s Theatre, Birmingham, 1892, when she sang her hit song ‘What Do I Care?’  In 1893 Reeve was cast as Bo-Peep in Bo-Peep and Bonnie Boy Blue performing with Maggie Duggan as Boy Blue and Bert Gilbert as John Horner at the Prince of Wales’s Theatre, Birmingham. Ada Reeve later married Bert Gilbert (Gilbert Joseph Hazlewood) on 5 May 1894 in Nottingham, and they performed together in Jack and Jill at the Comedy Theatre, Manchester that year. Reeve was cast as Jill and Connie Ediss played the principal boy Jack, while Nellie Wallace was second girl and Reeve’s understudy. In 1896 Reeve starred in Dick Whittington at the Grand Theatre, Leeds where she played Alice and scored acclaim for her duet ‘I Want You, Ma Honey’ with Wally Huntley Wright.

It was whilst playing Bo-Peep at the Prince of Wales Theatre, Birmingham, in 1893, that J. C. Williamson first saw Ada Reeve. He engaged her to play the principal role of Robin Hood in his sixteenth annual pantomime Babes in the Wood or, Bold Robin Hood and His Merry Men, which ran between 27 December 1897- 11 February 1897 at Her Majesty’s Theatre, Sydney. The cast for Babes in the Wood included Bert Gilbert as the wicked uncle, Baron Bounder, with Alice Leamar as Maid Marion and George De Lara as Dame Tabitha Durden. Carrie Moore and Lily Titheradge played the babes, and John Coleman and John Burke appeared as the robbers. The pantomime “was in three acts and the final scene, ‘The Wedding Breakfast’ was the talk of Sydney at the time” according to the Sydney Morning Herald. The pantomime transferred to the Princess’s Theatre, Melbourne for Easter 1898, running between 2 April – 5 May 1898. Alice Rene assumed the role of Robin Hood because Reeve was too fatigued. Reeve continued in the less strenuous role of Maid Marion and introduced her popular song ‘What Do I Care?’ into the programme. The Argus praised Reeve for her “charm of manner, sprightliness, and high spirits, and the piquancy of her singing”. The Age noted that “Miss Reeve’s songs, Little Mascotte, The Simple Little Maiden of To-day and some others, were frequently encored; and Miss Reeve’s suggestive solo, She Was One of the Early Birds, met with similar tokens of appreciation”.

In December 1899 Ada Reeve revived her titular role as principal boy in Aladdin at the Prince’s Theatre, Bristol, until March 1900.  She was again cast as Aladdin when the pantomime opened on 22 December 1900 at the Prince’s Theatre, Manchester with George P. Huntley as Widow Twankey, and Horace Mills as Abanazar. In 1902 Reeve played the young Santa in Santa Claus Junior by Walter Summers at the Royal Court, Liverpool. She was to have revived her title role in Aladdin at the Eden Theatre, Brighton in December 1903 subsequent to her purchase of the theatre’s lease on behalf of her second husband Wilfred Cotton. However, she caught typhoid fever on a trip to Germany and consequently was too ill to perform.

Reeve describes her stint as Aladdin during Christmas 1904-05 at the Theatre Royal, Birmingham as “one of the happiest pantomime seasons that I ever remember, with none of the internal friction that only too frequently mars the relations of a company. Fanny Dango, sister of Lettie Lind, was my principal girl, and we were great friends. The Abanazar was Harry Tate – a really nice person, quite devoid of the selfishness sometimes found in good comedians”. Perhaps it was this positive experience that induced Reeve to revive the role at the Theatre Royal, Birmingham from 26 December 1905, working again with Harry Tate as Abanazar, and Harry Brayne as Mrs Twankey. 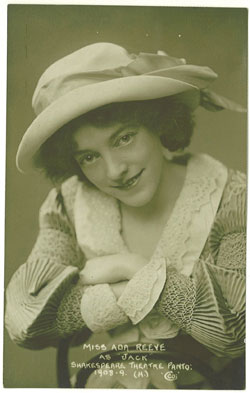 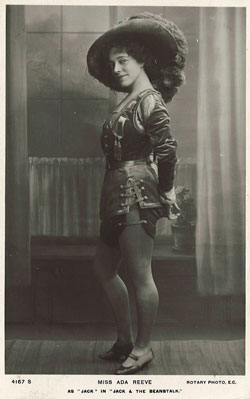 Ada Reeve was cast as principal boy in Jack and the Beanstalk during the Christmas seasons of 1908-09 and 1909-10. Her first stint as Jack was at the Shakespeare Theatre, Liverpool, and the following year she revived the role at the Theatre Royal, Birmingham, with George Robey as her stage mother. She describes her season at the Shakespeare Theatre as a very enjoyable one.

In 1917 she was fulfilling a return engagement at the Tivoli in Melbourne in You're in Love. 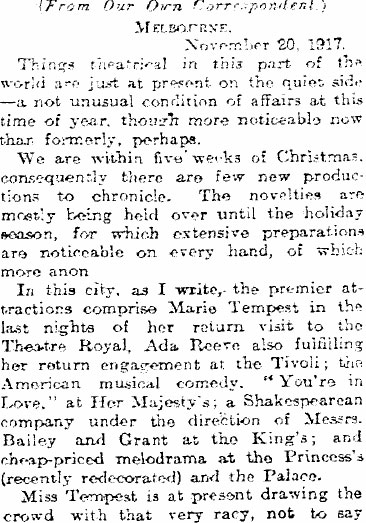 Ada Reeve starred in the title role of Aladdin for J.C. Williamson’s theatre company, opening on 24 December 1923 at Her Majesty’s Theatre, Melbourne.

This was the first time Reeve had worked with Williamson’s since her inaugural tour to Australia in 1897, however her professional acumen, particularly in the role of Aladdin was acknowledged in the Australian press. Theatre magazine, for example, reported that “Ada Reeve’s Aladdin is a well-known impersonation on the London stage, and Australian audiences can look forward to a delightful piece of characterisation”. Reeve’s professional status as a partner in a profit-sharing arrangement was also underscored in a contract between herself and J. C. Williamson’s theatre company for Aladdin dated 29 September 1923. Reeve also had management responsibilities with the production to be under her personal supervision. Indeed, theatre programmes for the pantomime endorse Ada Reeve’s production responsibilities in association with George Shurley.

In accordance with the contract for Aladdin Ada Reeve was to be available for rehearsals for at least three weeks prior to the pantomime’s opening. J. C. Williamson agreed with Reeve that “her name was to have the premier position and prominence in all advertisements”. Furthermore, she was to be allowed a manager, whose salary (not exceeding £12 per week) was to be paid from the joint venture. The cost of a maid and a dresser for Reeve was also to be borne by the venture, including travel expenses. Reeve was to be paid £150 per week for twelve weekly performances.

Ada Reeve was supported on the Aladdin tour by Tom Payne as Widow Twankey, Hope Charteris as Princess So Shi, George Welch as Abanazar, and a young Gus Bluett as the policeman Boo-Bee. The pantomime consisted of eighteen scenes in two acts and Reeve, as Aladdin, was acclaimed by the press as an immediate success. Reeve led the company in an Aladdin Gala Performance on 15 January 1924. This performance was tendered in honour of the visit of His Excellency Vice-Admiral Shichigoro Saito, C.B. and Officers of the Japanese Training Squadron. Dignitaries at this performance also included the Acting Prime Minister, Members of the Federal Ministry, the State Premier, Members of the State Ministry, the Lord Mayor and Lady Mayoress, and the Consul for Japan. Aladdin transferred to Her Majesty’s Theatre, Brisbane on 29 March 1924 after a short regional tour of Victoria.

Aladdin was acclaimed an annual pantomime extravaganza that had enjoyed tremendous success in Melbourne. The pantomime later opened at the newly renovated Palace Theatre, Sydney on 19 April 1924 and there was a daily matinee during Easter week. Ada Reeve and the Aladdin Company later made their farewell Sydney appearance on 15 May 1924 to tour New Zealand.

Ada Reeve acquired stagecraft and honed her skills with on-the-job training during her nascent career in pantomime. She progressed to starring roles as principal boy as an adult and became a renowned pantomime veteran. Reeve in an article for the Brisbane Courier-Mail, in 1924, connected her passion for pantomime with her love for “the many true artists associated with it in my memory”. Ada Reeve deserves to be remembered still as one of these ‘true artists’ for her contribution that enriched and enlivened the pantomime genre both in England and in Australia.

Reeve, Ada. Take It for a Fact: A Record of My Seventy-Five Years on the Stage. London: Heinemann, 1954.

Tait, Viola. Dames, Principal Boys and All That. Melbourne: Macmillan, 2001. 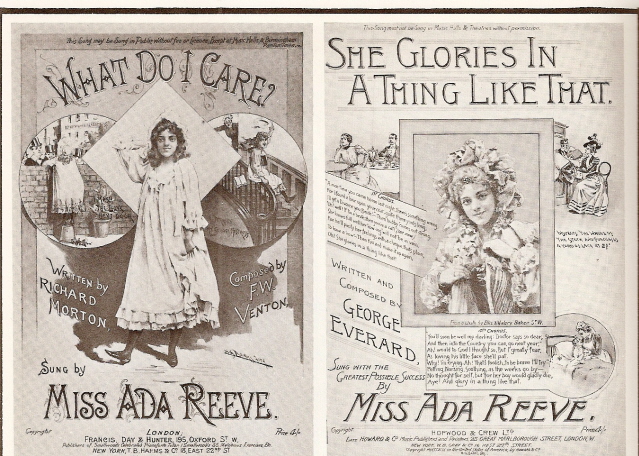