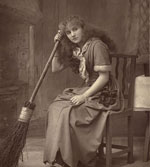 [Synopsis: Part I. Sc. 1: The Factories of Fairyland: Elfin workmen and fairy artificers work making all the articles required for Christmas. The Fairy Godmother appears seated on the moon and the craftsmen tell of their work--the Electricians have made a lamp for Aladdin; a Smith, bells for Bow Church chimes; a Weaver, a cloak for Red Riding Hood; a Potter, a jar for the Forty Thieves; the Glass-blowers, crystal slippers for Cinderella. The Fairy Godmother says Cinderella is the one she loves and decides to bless her with four gifts: Beauty, Virtue, Patience, and Industry. Sc. 2: Autumn in the King's Wood: Hunting choruses as the Fairy Godmother enters disguised as an old woman. The hunters scorn her but Cinderella gathers sticks for her and is kind. FG promises Cinderella a husband "wealthy, handsome, wise, and witty." FG and Cinderella sing a duet after which Cinderella sleeps. FG throws off her disguise and presents a Grand Autumn Ballet, with Mother Wood-Pigeon, Young Wood-Pigeons, a Fox, and many leaves. (The text provides ink drawings of the costumes for all the various roles.) After a hunting chorus the Prince appears as the valet and sings a love duet with Cinderella--"Life of my Heart." Sc. 3: At Baron Pumpolino's: Thisbe and Clorinda are Girton College girls who can jabber Greek and Latin, read French, play golf, and indulge in manly exercises. Thisbe has an affectation for intellectuality--Ibsen, Spooks, and the new humor. Fernando announces the ball and flirts with the Baroness. Dandini enters and is mistaken for the Prince. They sing a double quartet and dance. Sc. 4: The Kitchen at the Baron's: Cinderella sings "For Love's Sake Only"; Pedro brings in boxes of new clothing and the abused Cinderella is compelled to dress the others, not-with-standing her father's attempts to protect her from the malignity of her stepsisters. After they leave FG appears and changes the cat into a page, a pumpkin into a coach, etc. A magical change of scene to Sc. 5: The Fairy Boudoir, where fairies enter as Perruquiers (hairdressers), Looking-glasses, Pincushions, Gloves, Handkerchiefs, Jewellers, Florists, Perfumers, Powder Puffs, Fan-makers who fix Cinderella up, and, with Sylph Coquette, all enter into a Dance of Children, at the end of which the Fairy of the Slipper enters. Cinderella gets into the carriage and is warned about returning before midnight. Part II. Sc. 6: Near the Gates of the Palace: Chorus of Halberdiers, with entrances by the Grand Chamberlain and Alidoro, followed by Ministers of War, Marine, Finance, and Agriculture. The Grand Chamberlain sings "Our Brave, Brave Volunteers." All exit and Dandini appears to complain of the Prince's love-sick condition. Sc. 7: The Royal Palace, with illuminated gardens and numerous dances: a polka chorus, grand bal champétre illustrating the chronology of dance, guests in Roman Dress dancing to "Helen of Troy" in classic measure, followed by a pastoral dance, a pavane in Florentine dress suitable to the Romance of Romeo and Juliet, an Andalusian dance, a Nautch dance, a Tudor dance from "Henry VIII," a Gavotte, a Japanese dance, and the Grand Ballet, followed by a Grand Vocal Waltz. Thisbe and Clorinda discover that Dandini is not the Prince. Cinderella appears, and she and the Prince sing a duet and then a concerted number about ice cream. FG also appears, to the amazement of the guests, and blesses Cinderella's love. The Prince tries to send FG away, but she warns against laughing at love or boasting "thou'rt free," and the Prince acknowledges the mystery. Midnight strikes and Cinderella runs off, losing one of her slippers. Sc. 8: After the Ball: Cinderella flees homeward, accompanied by the cat. Others leave, disappointed at the sudden breaking up of the party and singing "After the Ball is Over." Sc. 9: Back in the Kitchen, or the Back Kitchen Again: Pedro consoles Cinderella; the others return, trumpets announce the arrival of Dandini, who tells of the slipper contest. Thisbe tries to bribe him. Sc. 10: Terrace outside the Palace: The Prince has had no luck finding his bride, but he dreams of her. The stepsisters try hard to make the slipper fit, then Cinderella appears, is opposed, then gets her chance. FG and Coquette appear and with a wave of the wand FG clothes Cinderella again in beautiful clothes. The Finale celebrates love and the wedding. Then, the Grand Transformation Scene entitled "From Storm to Sunshine," created by Henry Emden and pictorially illustrating Beethoven's Pastoral Symphony in nine pastoral scenes, followed by The Harlequinade, by Charles Lauri and Troupe, entitled "The Progress of Locomotion," in two scenes: 1. The Old Tabard Inn (1793) and "The Old Stage Coach"; and 2. The Admiralty Pier, Dover (1893) and "The Continental Mail." With Mr. Charles Lauri (Clown) Mr. E. Zanfretta (Pantaloon), Mr. H. Evens (Boots), Mr. H. Kitchen (Harlequin), Mr. F. Kitchen (Policeman), Mr. G. Aubrey (Ticket Inspector), Miss Minnie Tight (Columbine).] 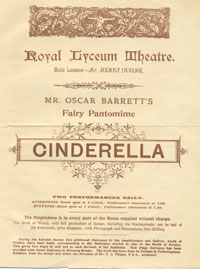 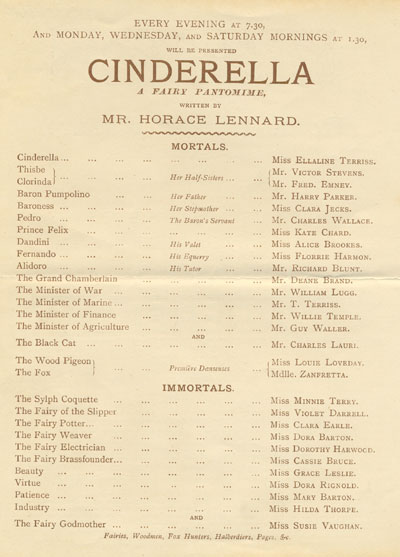