Over the years I have collected an enormous amount of pantomime programmes, posters and handbills. I keep my collection in two separate filing cabinets- "Ancient"- from Victorian up to the 1960's and "Modern"- from the 1970's onwards. In January 2003 my collection was featured in the magazine 'Collect It!' 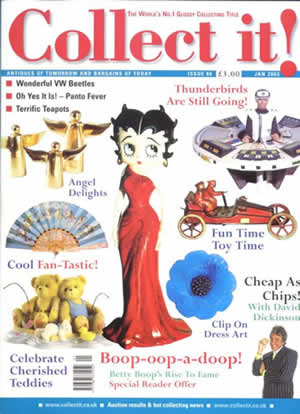 "Cinderella" seems to take up quite a bit of space in my collection (after all - Peter and I have over twenty-five years of our own in there!).

My oldest "Cinderella" programme dates from 1893. Other favourites in the files are the 1910 Lyceum production, the 1908 "Cinderella" at the Adelphi Theatre with Phyllis Dare and Dan Rolyat in the cast, and from the1930's the Drury Lane "Revnell & West" pantomime. From the 1940's the Arthur Askey pantomime produced by Emile Littler in 1947, and the George Formby (and Dick Emery) production at Liverpool Empire in 1949.

Other "treasures" include Danny La Rue and his stage partner "Alan Haynes" as The Ugly Sisters in 1964 at the New Oxford, and several scripts from  1906,1926 and 1931 productions of the pantomime.

I've collected unusual objects relating to pantomime such as Biscuit tins and snow globes, stamps and figures in ceramic, miniature coaches, crystal slippers and even the world's tiniest panto programme- "Humpty Dumpty" at Leeds Grand- created for a doll's house, and (using a very strong magnifier) completely readable, even if it measures 1 cm by 1.5 cm!

I have Russian wooden nesting dolls shaped like "Puss in Boots", Beer mats commemorating Morecambe & Wise in "Sleeping Beauty" at the Bristol Hippodrome, Victorian prints of Harlequin and Pantaloon, posters of Joseph Grimaldi at Sadlers Wells, playing cards, toy theatres, magic lantern slides, costume designs and postcards of Pantomime stars of the 1900's..a collection that increases all the time, and space that decreases!

This is my collection- and, modest as it is, it just reinforces the importance that an institution like "The Theatre Museum" has in the centre of London. The V&A Theatre Museum will hopefully soon reveal plans to remain in London -possibly sharing it's enormous collection with the Royal Opera House's own- let's hope so- otherwise who else am I going to donate this little lot to!

Of all the "treasures" that have briefly passed through my hands the most exciting was the hundred or so original designs by Wilhelm- now housed safely at the Theatre Museum. (See our article on Wilhelm). When we opened them in a terraced house in Newbury Park, and later spread them out on the carpet of my spare room to catalogue them all, it was amazing to see how clear and bright they were, despite having vanished for over a hundred years. The Theatre Museum has my support, and I'm sure it has the support of all dedicated fans of pantomime- visit it next time you are in Covent Garden and lend it your best support- your time! 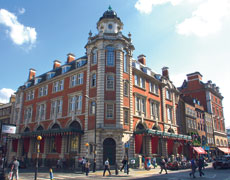 The Nigel Ellacott Collection! (A small part of it!)