In the days of King Alfred there lived a poor woman who lived in the country, a great many miles from London. She had been a widow some years, and had an only son named Jack- he was indolent, careless and extravagant. By degrees she disposed of all she possessed- scarcely anything remained but a cow.

She approached her son. “I have not money enough to purchase food for another day- nothing remains for me but to sell my cow. I am very sorry to part with her, it grieves me sadly, but we must not starve” 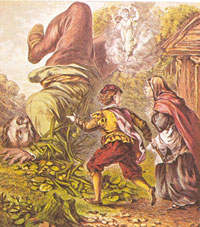 Jack set off for the market, and, as he was going along he met a butcher. The Butcher held some curious beans in his hat. They were in various colours, and attracted Jack’s notice. This did not pass unnoticed by the Butcher, who offered all the beans in his hat in exchange for the cow.

The silly boy could not express his pleasure at what he supposed so great an offer. The bargain was struck, and the cow exchanged for a few paltry beans. Jack made his way home thinking to surprise his mother.

When she saw the beans her patience quite forsook her. She kicked the beans away in a passion. They flew in all directions, some were scattered in the garden. The poor woman reflected on her great loss, and, not having anything to eat, they both went supperless to bed.

Jack awoke very early next morning, and, seeing something uncommon from the window, ran into the garden, where he discovered some of the beans had taken root. The stalks were of an immense thickness, and so entwined that they formed a ladder nearly like a chain in appearance. Looking upwards he could not discern the top, it appeared to be lost in the clouds. He quickly decided to try and climb to the top, in order to seek his fortune. His Mother begged him not to go, said it would break her heart, but Jack set out and, after climbing for some hours, reached the top.

He found himself in a strange country. It appeared to be a desert, quite barren: not a tree, a shrub, a house, or a living creature to be seen. Jack walked on, hoping to see a house where he might beg something to eat and drink. Presently an infirm looking woman appeared. He saw that she was old, her garments tattered. She enquired of Jack how he came to be there. He related the circumstances. She then asked him if he recollected his Father.

Jack replied he did not, and frequently when he asked his Mother she burst into tears. There seemed to be some secret connected with his Father’s history which his Mother would not disclose.

The Old Woman replied “I will reveal the whole story, your Mother will not. I am a Fairy. If you do not perform exactly what I desire, your Mother and yourself shall both be destroyed!”

“Your Father was a rich man, he was very  good to the poor. He never let a day pass without doing a kindness to some person. Your Father, though only a private person was as rich as a Prince. He deserved all he possessed, for he only lived to do good”

The Fairy continued with her tale: She told Jack that a Giant living near by “as wicked as your Father was good” wished to enrich himself by any possible means. The Giant tricked his way into Jack’s Father’s attentions by pretending to be a victim of a calamity, and received his  own apartments in the Father’s house.

Tricking the servants into leaving the home, the cruel Giant stabbed his host- Jack’s Father to death, 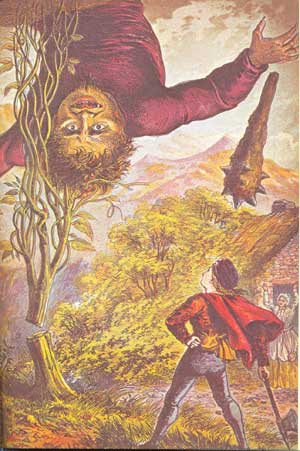 along with the Porter and the Nurse. Jack’s Mother and her three month old baby discovered the body, and were spared by the Giant on conditions that Jack’s Mother never revealed who his father was, or what had befallen him.

The Giant and his wife loaded up all of the Father’s treasure, set the house on fire and departed. Jack’s Mother wandered a great many miles before settling in the cottage where he was brought up.

The Fairy revealed she had been Jack’s Father’s guardian at his birth “But Fairies have laws to which they are subject as well as mortals”. She revealed that the day that Jack sold the cow was the day her powers returned. It was her magic that created the beanstalk that brought Jack to the land of the Giant.

“You are the person appointed to punish him for all his wickedness. You will have dangers and difficulties to encounter, but you must persevere in avenging the death of your Father, or you will not prosper and will always be miserable”

The Fairy told Jack that he could seize all of the Giant’s possessions, for everything in fact belonged to him. She also warned Jack that he was to tell his Mother nothing of his journeys to and from the Giant’s realm, as the shock would kill her.

Jack bade farewell to the Fairy, and walked until he came upon a large mansion. A plain looking woman bade him enter, and expressed her surprise at seeing another human being. Her husband, the Giant she told him never ate anything except human flesh.

He entreated the woman to take him in for one night only, and hide him in the oven. She was of a passionate disposition, and gave him plenty to eat and drink, and took him into the house. He was just beginning to enjoy himself where he was aroused by a loud knocking at the street door. The Giant had returned. Jack, secured in the oven heard his voice like thunder:

“Wife, I smell fresh meat!” His wife soothed him with her reply, “Oh! My dear, it is nothing but the people in the dungeon”.

Jack peered through a crevice and saw the Giant eating and drinking. When he had finished his wife brough a very beautiful hen to the table. He observed that every time the Giant said “lay”, the hen laid an egg of solid gold!

At length the Giant fell asleep by the fireside. At day break Jack crept out of his hiding place, seized the hen, and ran off with her. He descended the beanstalk to find his Mother overjoyed to see him.

“And now Mother”, said Jack, “I have brought home something that will make you rich, and make some amends for the affliction I have caused you through my idleness and extravagance and folly”. The hen laid as many eggs as they desired, they sold them, and in a little time became very rich. Jack, remembering the Fairy’s commands, and fearful that she might put her threats into execution resolved to climb the beanstalk once again.

Jack, fearing the Giant’s wife would not be so co-operative this time around, donned a disguise, and once again reached the mansion in the sky. He begged the Giant’s wife to give him food and shelter. She told him of a young man who had stolen the Giant’s hen, and, since then his temper had got much worse. However, she admitted him, and he hid in an old lumber closet.

Again, Jack watched the Giant eat, and, having finished his supper he said to his wife “I must have something to amuse me-either my bag of money, or my harp”. Presently the woman brought two bags into the room, so heavy that she could barely lift them..One was filled with silver, the other with gold. Presently the Giant fell asleep and snored aloud. Jack crept into the room, seized both bags and carried them away. The bags were so heavy he could barely carry them down the beanstalk.

Jack and his Mother lived comfortably for three years. All this time Jack heard nothing of the beanstalk, but  his mind dwelt on it, and, on the longest day, he once again ascended the beanstalk . He arrived at the Giant’s mansion in the evening, and found his wife standing by the door.

Jack had disguised himself once again, but she seemed to have no recollection of him, although he did have great difficulty persuading her to admit him for food and shelter. When the Giant returned that evening he said “I smell fresh meat”, and began to search all around the room. Jack was terrified exceedingly, and thought his death warrant was signed.

He hid beneath the lid of the copper and peeped out as the Giant ate his supper. He saw the most beautiful harp that could be imagined, and felt more anxious to get the harp into his possession than either of the former treasures. The music of the harp lulled the Giant into a sound sleep. Jack quickly got out of the oven and seized the harp.

The Giant awoke, stood up to pursue Jack, but he had drunk so much that he could not stand.Poor Jack ran as fast as he could: In a little time the Giant was sufficiently recovered to walk slowly, or rather reel, after him. Jack contrived to be first at the top of the beanstalk, the Giant calling  to him all the way he went.

The moment Jack set foot on the beanstalk he called for a hatchet, and one appeared in his hand! He soon reached the ground, just as the Giant was beginning to come down: but Jack with his hatchet cut the beanstalk close off to the root, which made the Giant fall into the garden- the fall killed him.

Jack kept his word and was a pattern of affectionate behaviour and attention to his parents. His Mother and he lived together a great many years, and continued to be always very happy.