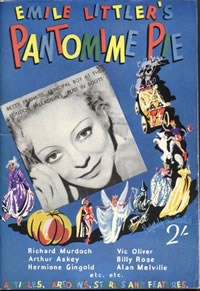 Fashions in theatre may come and go, but the tradition of pantomime must at all costs be preserved…Bert E. Hammond 1949

Pantomimes have not really changed a great deal in the past fifty years, but some have developed more on the lines of topical revues, which, in my opinion, is not the spirit of pantomime at all, and is not much appreciated by the youngsters as the older type of pantomime was.

Of course, modern pantomime has gained considerably by the improvement in electric lighting from the old days of gas battens, footlights and

old fashioned gas and oxygen limelights- and much more beautiful and varied effects can be obtained under the modern electric lighting and mechanical scenery, although we had our mechanics in the old days- for instance, the wonderful transformation scenes with the rises and sinks of scenery and chorus, and mechanically opening flowers, disclosing beautiful fairies and nymphs at the Brittania, Hoxton, Standard, Shoredich, Surrey theatres, and others.

With performers too. We had “large” principal boys as well as “small” ones. Large ones for Princes in “Cinderella” and Captains of the “Forty Thieves”, and small ones for the gnomes in the same pantomime, and our comedians were perhaps more “clowny” than the present day pantomime comedian. I am not sure that this is an improvement. People would call this marching with the times. I rather deplore the loss of the Harlequinade where the Harlequin and Columbine were skilled dancers, and the clown a chubby little fellow who could do certain amounts of acrobatics and was beloved by all in spite of his mischief, or because of it. The poor old Pantaloon who, aided and abetted by the clown in all his petty thieving- the discomfiture of the villain of the piece, the “red nosed Bobby”, and what a time they had in the haunted lodging house where the table cloths used to jump from the table to the walls, and back again. Large impossible spiders came from above to disconcert the lodgers, and the disintegrating policeman who was blown to pieces by the clown, and then put back together again-legs first, then body, then arms and finally the head, and presto” a wave from Harlequin’s wand and he was at his business again. 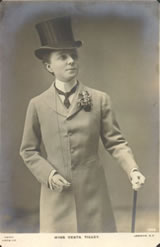 Vesta Tilley, London’s idol of the 1880’s and ‘90’s, was, perhaps the greatest principal boy of her time, and certainly the most popular. She only played at the Drury Lane once, though Sir Augustus Harris, who was then managing the theatre, pressed her to play there time and time again. She found the provincial theatres far more interesting, and she received very high salaries for her performances. On one occasion she was paid Ł500 a week by a provincial theatre.

Principal Boys, with their dashing ways and dainty looks, always captivated the younger members of their audiences- and they are the most critical. None were so successful as Vesta when she played in “Beauty and the Beast” at the in 1890. Vesta was the craze of her day- and in those days there were many usurpers trying to gain immortality on the boards of the pantomimes of .

At the Lyceum we always believed in slavishly following the fairy story and giving simple fun and a lot for the money. We tried to entertain both grown-ups, and children. For our first performance on Christmas Eve, which we called a "“Repetition Generale”, we invited many poor children from different districts of , usually about 2,500. Sometimes these performances went on from 2 in the afternoon until well after at night, but still the children wanted more. After this performance the actors, comedians and company would be called together to arrange for cutting the show down to the respectable length of about three hours. This caused great disappointment to the comics, who never seemed to tire of their antics, and were just as happy as the kids, but a four and a half hour school twice daily couldn’t be done, and the Melville Brothers had to be very firm.

Another great occasion in the Lyceum Pantomime season was the visit by Greenwich Royal Hospital School Boys, the coming sailors of the Royal and Merchant Navies, well over 2,000 of them, who used to march up the with their band playing at the head of the column, and their diminutive drum major marching in front. How those boys loved George Jackley, Naughton and Gold, Dave and Joe O’Gorman, Clarkson 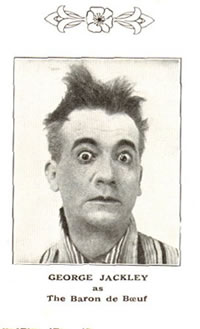 Rose, and the many other famous comedians who played in different pantomimes in this historic theatre. The Greenwich boys came for 21 years consecutively to the pantomime, except for one year during the first world war, and their visits only ceased when the school was removed to Norfolk, too far for them to travel.

Did you know the song “Roses of Picardy”, because you would have been sick of hearing it if you had attended the Lyceum chorus auditions. Walter and Frederick Melville loved this song, and at the end of the audition the chorus was made to sing it for tone and volume, and anyone who didn't know it before the audition certainly knew it after.

No sooner was one pantomime finished than preparations were started for the next year, planning scenery, comic scenes, ballets and effects. The pantomimes were mostly newly built and painted for each production in our own studios in Flitcroft Street, Holborn. Before our current pantomime had had its run many letters were arriving from patrons for the next year’s show.

We produced twenty-nine Pantomimes at the Lyceum Theatre, and I think I can say that the Lyceum Pantomime was a tradition, but like many other traditions of the past, it ended with the sale of the theatre to the London County Council for demolition to make room for a big roundabout at the junction of Waterloo Bridge and the Strand, which, by the way, in consequence of the second War has not yet been commenced.

I shall always feel that Pantomime has a spirit of friendliness all its own which creates good will all round. Long may it continue.

Bert E. Hammond was the Acting Manager and Treasurer of the Lyceum Theatre, London. The Lyceum continued a tradition of presenting a short Harlequinade  at the end of each pantomime, usually involving five or six members of the pantomime cast. The Lyceum Theatre, of course was not demolished by the London County Council- itself no longer in existence, and was re-opened as a theatre, after many years as a ballroom. The current production at the Lyceum is “The Lion King”, Disney’s spectacular musical. 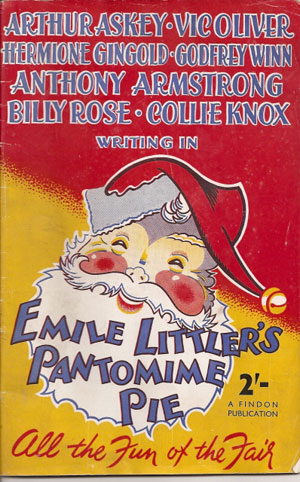